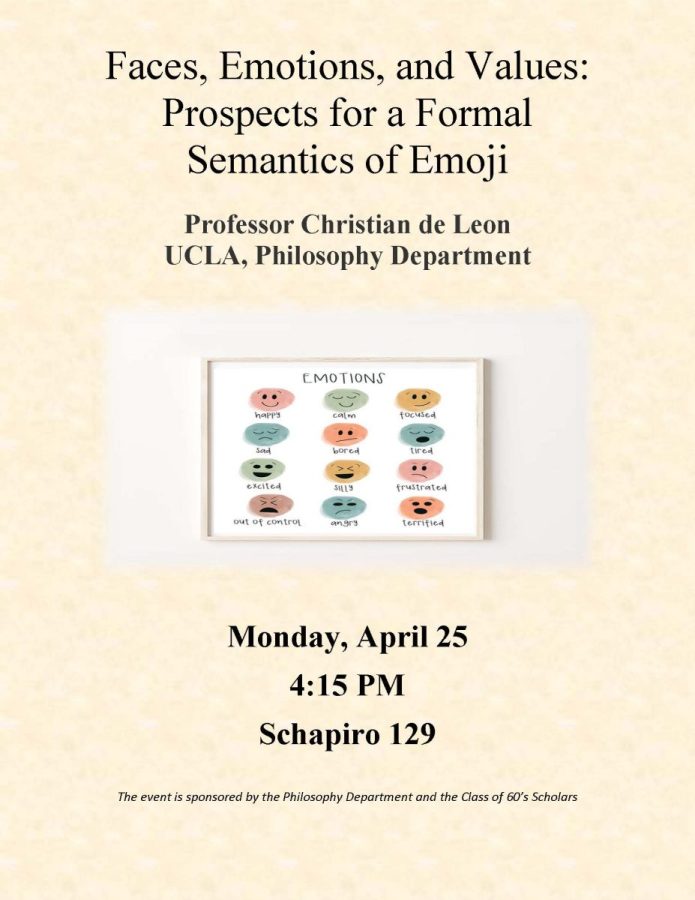 Christian De Leon, a PhD candidate at UCLA recently hired by the philosophy department for a two-year faculty position starting next fall, presented “Faces, Emotions, and Values: Prospects for a Formal Semantics of Emoji” on Monday. The talk summarized part of De Leon’s doctoral research at UCLA, which is an ongoing project with two other co-authors that studies emoji under compositional and discourse semantics. Next academic year, De Leon will teach courses in linguistics, philosophy, and cognitive science at the College.

De Leon hails from Texas and Indiana. After receiving a B.A. in philosophy from Indiana University – Purdue University Indianapolis in 2015, he moved to UCLA to pursue both master’s and doctoral degrees in philosophy. De Leon will finish his doctorate this summer, after which he will move to Williamstown to start his professorship at the College. In the next academic year, De Leon will teach an introductory linguistics course and two electives in the philosophy and cognitive science departments.

To narrow the scope of his talk, De Leon studied only the generic happy and sad face emoji familiar to iPhone users. He focused on the relation between these two emoji and their preceding propositions, as English speakers typically place an emoji after its relevant phrase. De Leon used simple declarative phrases, such as “I’m really hungry,” as the propositions in his examples.

“Our overall argument is that at least some uses of emoji should be analyzed as dependent on surrounding text,” De Leon said.

From here, De Leon examined how semantic theory of emoji relies on assessing infelicity — evaluating how normal a phrase sounds to a reader — and the author’s affective attitudes.

April Owens ’24 said that De Leon’s talk made her consider how the types of communication that she consumes impacts her perception of the information conveyed. “You can’t be on social media or communicating digitally without running into emojis, but it’s something I haven’t thought critically about until today,” she said. “A lot of people might wonder, ‘How is this relevant? It seems like you’re imposing a lot of structure onto something that feels so natural,’ but I think those things are really important when you think about how political messaging affects people — how Twitter affects entire communities. Everything is communication when you think about it.”

De Leon told the Record that he looks forward to his next two years teaching linguistics and philosophy of language at the College.

“I really hope to collaborate with my colleagues in philosophy, but also psychology, math, and computer science to start teaching more linguistics courses or more linguistics-adjacent courses, especially so that the value of how linguistics can be applied in all of those different fields can become clear.