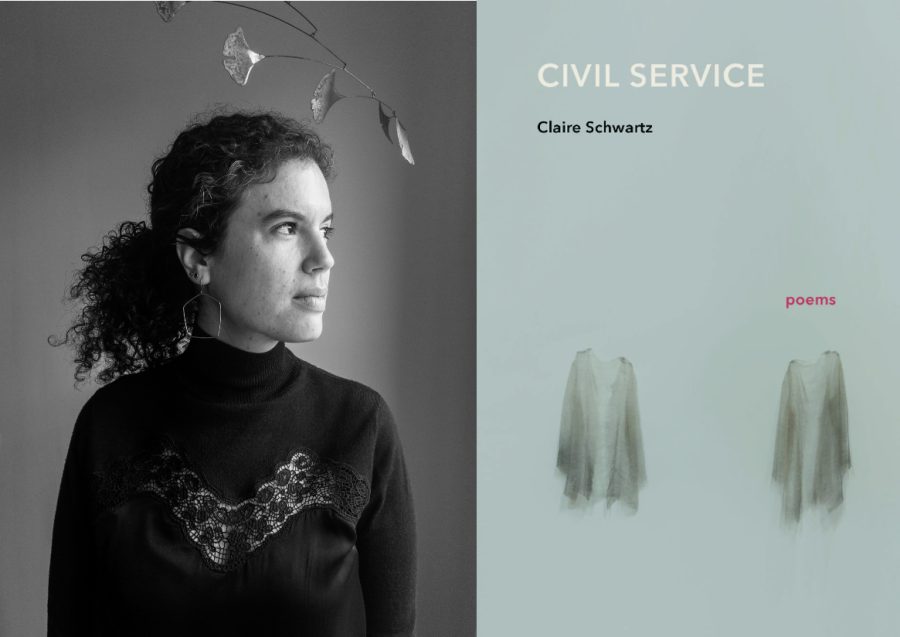 Schwartz’s upcoming book of poems, Civil Service, is slated for publication in August. According to the collection’s summary, “Civil Service probes the razor-thin borders between ally and accomplice, surveillance and witness, carcerality and care — the lines we draw to believe ourselves good.”

For Schwartz, it is important to stay grounded in her work and in herself in the wake of success. “I’m very lucky to have had my name called alongside people I admire tremendously,” she wrote in an email to the Record. “But if the award becomes the thing itself rather than a tool toward something that is fundamentally antithetical to an award economy, the work will have been severed from its reason.”

The process of securing the resources necessary for art-making can be dangerous because of their potential to change the artist’s relationship to her work, according to Schwartz. “So much of trying to find material support to make art requires translating the meanings of the work into forms more legible to people and institutions where capital is consolidated — grant applications, artist statements, statements of purpose, etc.,” she said. “There is a serious risk that the prevalence of this form of appeal can, I think, change one’s relationship to the wide possibilities of the work itself.”

“What felt particularly lucky about the Whiting is that there was none of that,” she continued. “Someone was paying attention to the work as it made [its] way in the world and felt that was enough to insist on its futures. I am profoundly grateful for the opportunity and for the gathering [of artists], while holding that the particular force of my gratitude also has to do with living in a world that manufactures scarcity for the majority.”

Schwartz began her book while pursuing her PhD in African American studies, American studies, and Women’s, Gender, and Sexuality studies at Yale University, where she found herself studying at an institution that “has a profoundly extractive relationship to its surrounding communities.”

“We would, for example, get these emails telling us when someone had been mugged on campus,” she said. “That produced a lot of fear, and there was, of course, nothing from within the university that would adequately make plain the broader context of violence of policing and surveillance — nothing sufficient to think through what that fear authorized. To the contrary, so much of what happens within the university is about rendering structures of violence ‘humane,’ necessary, in service of some ‘greater good.’”

At the same time, she was confronting a strictly regulated epistemology — one she said is often described as “a performance of mastery” — as she began preparation for her oral exams. “In so many ways, the poems [in Civil Service] were a record of discomfort with this kind of disciplinary structure of knowledge,” Schwartz said. “They became the place where I could move further into my not-knowing, to build out the questions without having to corral them toward answers, which too often shut down not just a given question, but an interrogative stance where inquiry becomes a mode of holding possibility open.”

It was in this environment that Civil Service and its interrogation of “the quotidian where political regimes are diffusely maintained,” as described in its summary, were born. “I was really starting to ask questions about what violence looks like, where I was taught to see emergency, and how my own fears and desires were produced,” she said. “These are ultimately the questions Civil Service is preoccupied with.”

This conception of knowledge and poetry also finds its roots in Schwartz’s time at the College where, despite her official degree in political science, she found her “academic home” in Africana studies (which did not exist as a department at the time) and new methods of learning through professors and peers alike. One such professor was then-Professor of Africana Studies Stéphane Robolin, who treated her as a “thought partner” during one memorable meeting at Tunnel City, she said.

“Something shifted for me in that conversation,” Schwartz said. “I began to take responsibility for my ideas in the world as a way of contributing to a social space. That deep attention — the transformative possibility of taking each other seriously — is something I try very hard to carry forward.”

“Africana studies taught me to refuse the idea that the current order of things is natural or inevitable,” she continued. “Poetry is, too, a place where I can practice generative estrangements — where I can refuse to take language, the ordinary medium of my living, for granted.”

In the end, Schwartz said that she will always return to reading as the foundation of her work. “What I’m trying to hold onto is the sense of myself first as a reader — as a person who is moved by the long histories and wide [presence] of the work of people who have attended carefully to what is and imagined what else might be,” she said. “I want the practice of writing to remind me of the fact of my amongness and to enlarge, in some small way, the possibilities of our togetherness.”

When it comes to reading Civil Service, Schwartz said that here is no one way to read the collection. “This question about readership — how meaning is made and remade as a collaborative [process] — is really at the heart of the collection, but ultimately I don’t think it’s my question to answer; it’s one that I hope each reader will continue to ask,” she said. “The reader’s questions will continue to change the meaning of these poems.”

It is with this identity as a reader that Schwartz approaches the future with a measured hand and pen. “I do think some things may be taking shape, but it feels important not to intercept the wide possibilities of their becoming with a name,” she said. “It feels especially important to give the work the time for it to find its form as I move from relating to Civil Service as an author — someone who can move the language inside the book — to a reader among readers.”