One in Two Thousand: Vincent Jiang ’23 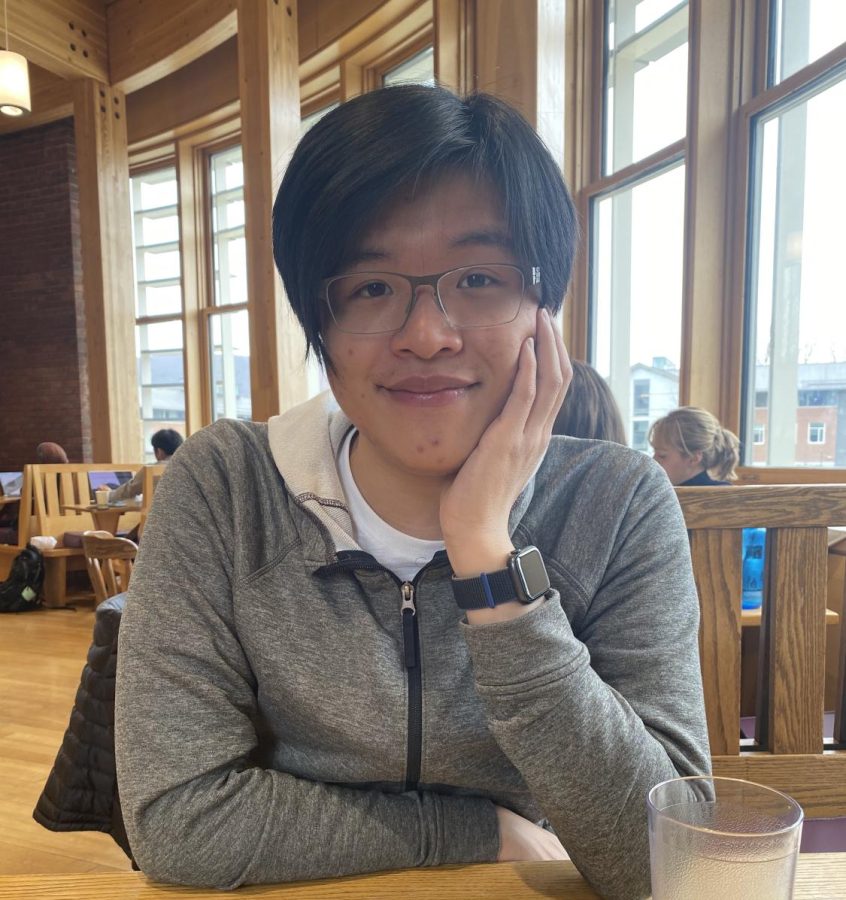 Each week, we randomly select a unix from a list of all current students at the College for our One in Two Thousand feature. As long as the owner of a selected unix is willing to be interviewed and is not a member of the Record board, that person becomes the subject of our interview. This week, the computer (using a script in R) chose Vincent Jiang ’23, who discussed being an English and statistics double major, founding the Fireflies club, and being a Dungeon Master (DM) in Dungeons & Dragons (D&D). This interview has been edited for length and clarity.

LW: I know you’re a stats and English major, which is crazy. You’re the only other person I’ve met with that combination. What’s up with that?

VJ: I always wanted to do English, or at the very least, I was always interested in writing, though it’s floated around a bunch of different areas. I was into fiction, and then I realized that I’m not a very good fiction writer. Then I was into poetry, and then I realized I wasn’t a very good poet. And then journalism — and I hope I’m decent at journalism, but maybe in a couple years, I’ll be like, “Ah, no, never mind.” But I just like writing [and] reading. English has always been a thing for me.

I think [for] stats, it was Professor [Xichen] Cai’s class. I took her 101, and then she was like, “Why don’t you take 202?” And I was like, “OK, might as well take 202.” And then I took 202, and she was like, “Why don’t you pursue the major?” It sounds a lot like — not coercion, but you know, foot-in-the-door, social psych stuff. But I don’t know, I think I’ve wanted to do something STEM-y Since I got here. I’ve been trying to do a balance of something with a lot of reading versus something with a lot of p-sets just so that I don’t get swamped with either. And I don’t like math, and I don’t want to do lab stuff, so stats is nice. And I guess a lot of stats kind of ties into journalism.

LW: Since coming into the major, what have you found appealing about stats?

VJ: It’s an interesting way of looking at things that I’m just not used to. There’s a lot of curiosity toward that — less so as the years go by because we do more and more math, but just from the beginning, it was just sort of like getting a lot of info, not knowing that it says anything, then finding out it does say something. It’s just sort of like every now and then, there’s this flash of discovery.

LW: I see you at various WCF [Williams Christian Fellowship] events. Are you Christian?

VJ: I grew up Christian because my grandma is Christian. By extension, my parents are Christian, though my dad doesn’t really do anything, and my mom only recently started doing stuff. But we wouldn’t go to church or anything growing up because of that. I always thought of myself as Christian, though. When I got here, it was definitely a big shift in terms of how people think of religion and stuff, so I feel sort of like [an] outlier.

LW: If you had such a tenuous connection [to religion] before coming to Williams, why [do] you still have a relationship with religion in that sense?

VJ: I guess I just believe, which is weird. Like I have no reason to. And whenever I think that, it’s sort of like, OK, but isn’t that what belief is? So not blindly believe, but accept things and accept that not everything can be explained. I do wonder if it is sort of like apathy or like, it’s the thing I’ve been doing, but I’m not sure. The community is also nice though. It’s nice going to WCF stuff, especially pre-COVID because they used to hang out in the chapel a lot.

LW: You took a gap year, right? What did you do?

VJ: Not much, just stayed home. I volunteered for a little bit. It was like social media, tracking disinformation. I did that for a month or two leading up to elections, and oh boy, is it some sketchy stuff.

LW: What did you have to do for that?

VJ: Mostly just find misinformation, summarize it, write down a bunch of stuff about it, and then put it in the database. I think the main goal is compiling a database for future use about misinformation on social media.

LW: Why’d you decide to take a gap year? Was it primarily COVID?

VJ: Yeah, [I] didn’t really feel like doing remote, and I was worried that even though we were going in-person, it was going to switch over to remote. It’s not too bad with English courses weekly because I feel like I participate more [on Zoom] — I don’t really talk at all in class — but like stats or STEM classes feel harder to do through the screen.

LW: So we’ve talked about academics, gap year, Christianity. What do you do for fun outside of class? On campus — or off campus.

VJ: Mostly on campus. I can’t drive, so it’s hard getting anywhere. I’m president of Fireflies. We’re like the Flow Arts Club.

VJ: The general premise is we have a thing tied to a string, and then we swing the string around. It’s sort of like manipulation and making patterns or doing moves.

LW: Did you start it? Or did you just join and become [president]?

VJ: I started it. I was part of a similar thing in high school. [I] saw there wasn’t one here, [and] I was like, I think I’ll just start one. It’s fun stuff. Definitely something you have to see to understand.

LW: Why did you want to continue doing it?

VJ: It’s fun. I’ve always wanted to do something more physical. Then, I got to flow art, and so I’m sort of like, “Oh, this is fun.” It’s just sort of moving my body and manipulating stuff. And I definitely had a hard time in the beginning, but as I got better, I felt like, “Oh, this is clicking in my mind” … the ability to string things together in patterns and understand how to move my body and move the props and stuff.

LW: What hobbies do you have besides flow arts? Things you just do…and I know you do some writing. Do you still do creative writing?

VJ: Not really, I haven’t had the time. It’d be nice to get back into it. Oh, actually, I’m a DM for D&D, and I do a lot of worldbuilding [and] plot writing for that, so I guess that’s a way to do writing.

LW: That is writing! Do you have a campaign now?

VJ: Yeah. I think we’re currently on break just because everyone’s been busy, but it’s been going since Winter Study.

VJ: Where did I get this idea? I think it was slightly based off of The Witcher in the sense that it’s sort of like — I don’t know what they call it — when the worlds collided, and it was sort of a fusion between [them]. It’s sort of like that, except with the planes in D&D. So it’s the material plane, which is [where] most of the stuff happens, and then the Feywild intersects. Not sure why. Maybe I’ll have a reason.

LW: DM, you should have a reason.