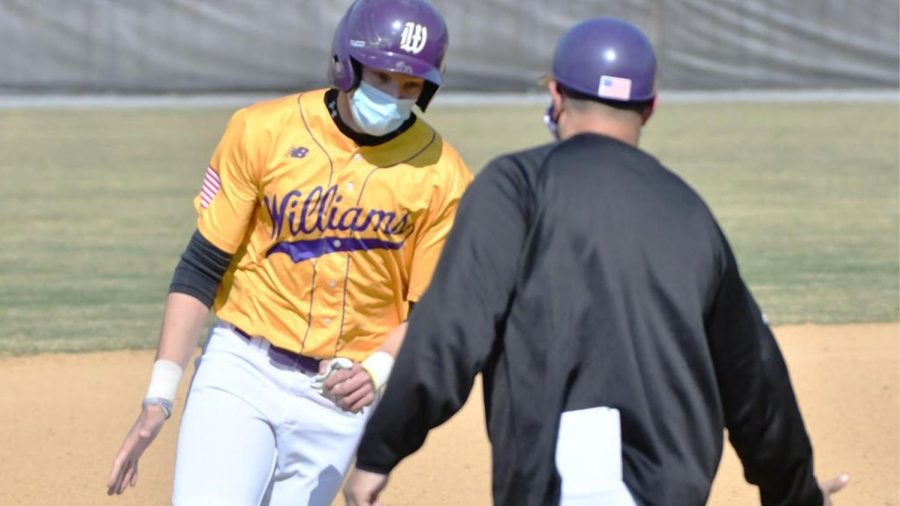 Baseball won one and lost one game at home against Hamilton. (Photo courtesy of Sports Information.)

On Saturday, baseball faced the Hamilton Continentals in a doubleheader series. With the first game tied at 6-6, Ryan Young ʼ22 got his hands on a fastball, taking it down the left-field line as Billy Shea ʼ22 raced home from second, crossing the plate with what would be the winning run as the Ephs took down the Continentals 8-6.

The Ephs’ bats got hot in the third inning, scoring six runs to grab a commanding 6-0 lead. In the first at-bat of the inning, Young connected for a double. Jakob Cohn ʼ23, back in the lineup for the Ephs, singled up the middle, allowing Young to score and take an early 1-0 lead.

Eric Pappas ʼ22 quickly got on base with a single to right field, and both he and Cohn advanced bases on a wild pitch. Danny Lynch ʼ22.5 then walked to load the bases. With runners in scoring position and only one out, a Hamilton error allowed two more runs to score.

The Ephs kept the inning going when Shea drove the ball into right field for a double, sending Henry Juan ʼ25 and Lynch home. Finally, Matt Brown ʼ23 connected for an RBI single, putting the Ephs up 6-0.

Hamilton returned the favor in the fourth inning starting with a double from Brady Slinger who stole third and reached home on an error. Hamilton player Jackson Johns knocked a ball into left field for a 2 RBI single that put Hamilton three runs behind Williams, making it 6-3.

Hamilton continued to fight in the 5th, taking advantage of a couple of walks to get on base. With runners on the corners, Slinger took off from first on the pitch. As Juan rifled the ball across the diamond to second, Ethan Harrast raced towards home, beating the throw back from Pappas and making it 6-4.

Slinger was able to get home on a Williams error and put Hamilton within one. The tying run came just two batters later when Johns poked one into shallow left field for an RBI, making the game 6-all.

The Ephs quickly responded in the bottom of the inning, beginning with Shea reaching first after taking a pitch to the arm. Shaking it off, Shea moved to second on a sacrifice bunt from Tyler Spiezio ʼ22.5, who narrowly missed beating the throw to first.

With Shea on second, Young smoked the ball down the left field line for a double that brought him in to retake a 7-6 lead. Michael Giove ʼ24 then poked the ball into left field for a single and moved Young to third. With Cohn at the plate and only one out, Giove stole second before Cohn was intentionally walked to load the bases.

With one out still remaining, Pappas stepped into the batter’s box and drove a fly ball into deep right field for a sacrifice fly that sent Young home, giving the Ephs the 8-6 lead.

James Murray ʼ25 replaced Eric Gage ʼ24 in the fifth inning, keeping Hamilton scoreless and finally striking out Johns, putting the ball low and away to end the ballgame and giving the Ephs the 8-6 win.

Returning for the second game of the afternoon, Hamil-ton broke open the first inning with a Greg Kopp double that scored two and put Hamilton up 2-0. Kopp eventually was able to reach home on a passed ball to make the score 3-0.

Williams responded in the bottom of the inning with an RBI single from Lynch that scored Pappas to reduce the lead to 3-1 in favor of Hamilton.

The Ephs added another run in the second with an RBI single from Young that sent Juan home.

Williams finally tied the game in the third when David Driscoll ʼ23 grounded out to third with bases loaded, allowing Pappas to reach home with the tying run to make it 3-3.

However, the Ephs got into trouble in the fourth inning. With two outs, it looked like Sean Hogan ʼ23 would end the inning before Hamilton found a groove, poking balls into the outfield to bring in runs. A costly error didn’t help the Ephs, and Hamilton was able to score 9 before Max Hart ʼ25 was able to record the final out on a strikeout.

Down 12-3, the Ephs tried to chip away at the lead, scoring in the seventh and eighth innings with a Pappas sacrifice fly and a Driscoll RBI single. But the Ephs failed to recover from the damage of the 4th inning, and Hamilton added two more in the 9th for a final of 14-9.

After the doubleheader, the Ephs’ record changes to 8–14 (2–6 NESCAC) after facing a now 14–13 Hamilton. On Tuesday at 4 p.m., the Ephs will take on Rensselaer Polytechnic Institute at home.