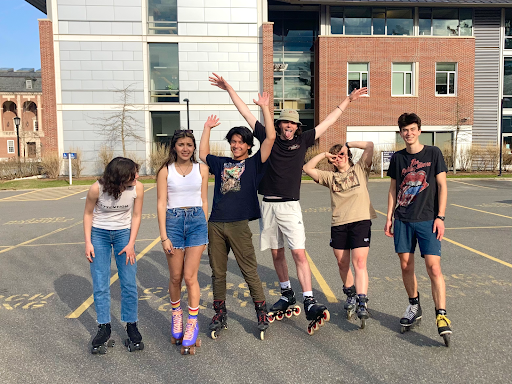 Members of Ephskate can often be found in the parking lot behind the First Congregational Church, where there is plenty of room to do laps on skates. (Photo courtesy of Nathan Liang.)

In recent weeks, as students have brought their textbooks and computers outside to take advantage of Williamstown’s balmy springtime weather, one group of entrymates and a few other friends have been enjoying the warmer temperatures for another reason. Their group chat is named “Blades of Williams,” their Instagram page is @ephskate, and they have taken over the walkways and parking lots of campus on roller skates.

The informal skating group was conceived over Winter Study when Nathan Liang ’25, Karen Liu ’25, and Henry White ’25 — who are all members of the entry Williams 2 — took an ice skating PE class together. “We started going to the free skates a lot,” White said. “And a lot of other people were joining, too.”

The trio was inspired to switch from ice skating to roller skating once the weather was warm enough for the students to take their hobby outside. “I tried to convince as many people to get [roller skates] as possible,” said Liang, who runs the group’s Instagram page. “I was in the skating community in San Francisco, where I live… I wasn’t missing [roller skating] here, but I thought it would be fun to get people into it, since it’s a super fun social outdoor activity.”

Liang’s first step was to create a way for fellow skaters to reach each other on campus. “I was just like, ‘I’ll get everyone I know into a group chat,’” he said. “That was a big part of how it started.”

Shoshie Hemley ’25, another member of Williams 2, equated the message group to other informal chats on campus, like the “Spontaneous Outings” GroupMe. “You can just text, ‘Anyone skating at 4:30? I’ll be — you should join!’” she said. “Nothing’s that organized.”

Liang also expressed appreciation for the less-organized nature of the group. “I really like the informal part of it being a community,” he said.

According to Liang, the group consists of various members who all have different levels of experience with roller skating. Liang learned how to skate over quarantine, and many in the group have skated intermittently since childhood but are only now getting back into it. “There’s definitely a big range of skill levels,” he said. “I’m trying to teach people as much as possible.”

Recently, the group has been pushing the boundaries of their skating abilities by attempting  tricks at the skate park by Cole Field. “It’s kind of a new thing for everyone, so we’re just trying to get into it,” said Liu, who recently sustained a minor injury after falling at the skatepark. “I’m fine, but I think I’m going to go to the Health Center again. We’re going to get those tricks down. Maybe we’ll [take] a couple of weeks off, but [then] we’re going to go right back.”

Despite its dangers, skating has presented a way for students to escape the pressures of academic life. “Once one person wants to go [skating], you just go, even though you have a lot of work,” Liu said. “It’s kind of a destressing type of thing.”

Hemley echoed a similar sentiment. “I get possessed every time [I skate] and forget how long I’ve been outside,” she said.

The formation of the skating group has also given members the opportunity to meet other students on campus. “People have been coming up to us and asking us if we’re a club and if they can get involved and start skating too,” White said.

“I feel like there were a lot of people I had seen around campus — but we didn’t particularly know each other — but once we started skating, you’d just talk about stuff,” Liu said. “Skating isn’t an individual task.”

In thinking about the future of skating at the College, the group is considering the possibility of creating a formal club on campus. “It would be cool to get funding so people could try skates — and also so we could get light-up wheels,” Liang said. “Also, we could all get some knee pads or helmets, which are really necessary, especially at the skatepark.”

Regardless, the group wants to entice as many students to skate as possible. “Hopefully we get more members,” Liu said. “We’re taking over Williams College on our wheels.”