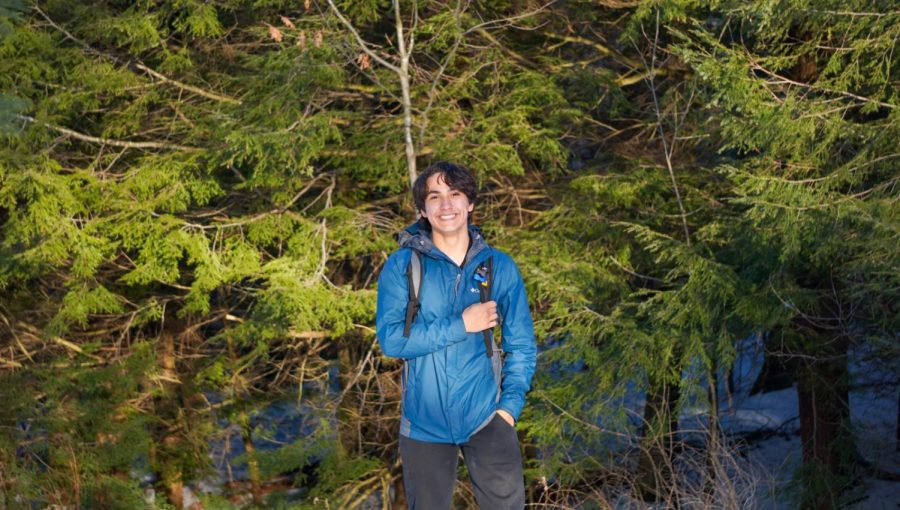 Each week, we randomly select a unix from a list of all current students at the College for our One in Two Thousand feature. As long as the owner of a selected unix is willing to be interviewed and is not a member of the Record board, that person becomes the subject of our interview. This week, the computer (using a script in R) chose Isaac Rivera ’25.5, who discussed growing up in Denver, his experience as a Native American, and his take on Williams culture. This interview has been edited for length and clarity.

Carlos Hernandez Tavares (CHT): The first thing I want to ask you about is your involvement with campus activities and extracurriculars. I know you write for the Mohican News and that you’re involved with other groups relating to Native Americans’ rights and experience. Can you talk a bit about that?

Isaac Rivera (IR): Yeah, as one of the, you know, token Native Americans. [Laughs.] Yeah, I think I’ve done a lot of work with essentially establishing some sort of Indigenous presence on campus. Most people don’t realize there’s a lack of Indigenous presence because they don’t exist — you sort of need to understand that identity to see its invisibility.

CHT: What organizations do you work with on campus?

IR: I work with the Stockbridge-Munsee tribal office in cultural recreation claims. I also help to establish and maintain tribal resources for the Stockbridge-Munsee. I am sort of a liaison between the Native students on campus and also the administration. By working in conjunction with the tribal office and administration, I sort of am using the tribal office as a jumping-off point to get the resources necessary for our organization, but due to the very small concentration of Native students on campus, it’s very difficult to actually have the numbers to press [the College].

CHT: Have you met with other Native American students as part of your job? What has that been like?

IR: Yeah, one of my mentors [is] Devon Parfait ’22. He’s very much been — before me — the token Native. I think they cycle us out every four years. [Laughs.] He’s passing down the torch to me, and I’m like, “Homie, why are you leaving me?” It’s like, I just got here, and I’m being abandoned. He’s one of the only other Native students that really gets what it’s like being on campus here. When we first met, it was like a hug. It was that solidarity of, “You get it.”

CHT: What would you describe the “it” is? What is it about Williams that you feel creates this solidarity between you and other Native students?

IR: I didn’t really feel present in my identity before Williams. It’s because of the way the capitalist, colonialist system has been structured that just serves to assimilate Indigenous groups. And it has done so successfully. It’s very much an issue of accessibility and opportunities available for Indigenous individuals.

CHT: Shifting gears a little, I know you’re from Denver. How has the transition been from there for you? Anything you miss about Denver?

IR: Oh, that’s interesting. I grew up in a really diverse community in Denver. So coming here was certainly interesting, [as you get] to see the different culture that emanates from the Northeast, especially the economic power that exists [here].

CHT: Anything about growing up in Denver that you feel gave you a different understanding of Williams?

My connection to land, which is very important for a lot of Indigenous people, is distant. So the way I sort of have navigated my own Indigenous identity has been by participating in the culture by furthering the cultural and political goals of Indigenous people across the continent, across the First Nations, because we are the original inhabitants of this continent. And that’s what’s important to me. I think that’s also what drives a lot of meaning in my life.

CHT: Do you ever plan on returning back to your indigenous lands in Latin America?

IR: I’m actually planning on working there and doing some research, hopefully with my people. But it’s certainly interesting how my own identity has been shaped because my roots have been dug deep here in these lands.

CHT: The lands of Williamstown?

IR: Not only the lands of Williamstown, but in Colorado, and in the continental United States in general. I grew up in North America. It’s this weird identity of: Where does an Indigenous person have to be born in order to be defined by their land?

CHT: So, in a sense, rather than being biracial, you feel like you’re “bi-landial?”

IR: Yeah, I use the term “transnational Indigenous scholar” because my identity transcends the idea of nations. I didn’t grow up on a reservation or on Indigenous land, but in a way, I am most connected to my identity by interacting with other Indigenous people and Indigenous groups. That is the way I feel connection to my roots.

CHT: I also know you came here last summer for the Summer Science Program, which was your first taste of Williams. How was that for you?

IR: My transition to Williams was interesting because my father figure in high school went to Dartmouth. And he had a Stanford degree as well. And so I had sort of known and been exposed to the elite atmospheres of institutions like these beforehand. I kind of had this preemptive idea of what I was getting myself into. That being said, however, it didn’t make the splash into cold water any less shocking. No, definitely, this place has messed up the way I think about money.

[In Denver], I was always very much stuck in just the survival mentality and unable to grasp the world around me. But once I came to Williams, once I let go of those survival mechanisms, I got to see the world in a much broader picture, which comes with its own sort of consequences because you can choose. You can see both the light and the darkness a lot more.

CHT: What has been your experience with campus culture?

IR: When you get a community as small as Williams, everyone’s essentially involved in each other’s business. Everyone’s very aware of their place and status within Williams. When it comes more to the social hierarchy, I think we are somewhat egalitarian in how we treat each other. Everyone’s nice and respectful. Because I know communities where people do not have their shit together, and that causes problems. You know, people having knife fights in the cafeteria. I’m very happy that we currently don’t have any violent tendencies at the school or anything.

I do think this carries over from the elites, this sort of caring about your social status, this identity thing about presenting yourself like, “Oh, I am clean cut. I am well-presenting.” It’s very much this thing that a lot of upper-class individuals have to contend with — their perception and worth — because that’s the thing. A lot of the students that are here are coming from the American elites. They’re coming from the top part of the hierarchy. And so they’re carrying the same things that their parents taught them or those behaviors their parents exhibited, and they reproduce them.

CHT: You seem to have a wide range of disciplinary interests. What connects them together for you? Is there a question you’re trying to answer? Does each subject make you curious individually?

IR: The frameworks that we use to understand the world — they’re useful for understanding the world, but they’re all made up. We have no true knowledge of the world, but I love taking all these different frameworks, synthesizing them, playing around with them, and making unique connections. What definitely drives me is my positionality: who I am as an individual who essentially, under some weird conditions, was able to make it to this school and has a buttload of experience that other people don’t in the sense of what my roots are. [That means] I’m able to make connections that a lot of people can’t. And so I almost feel obligated to try to seek those connections out.

IR: We can use Indigenous knowledge to inform our environmental policy or use Indigenous ways of knowing to conduct research in a way that’s also sustainable with biology. I can definitely see the work that needs to be done by Indigenous scholars because that’s the thing: You can’t have this work be done by anyone else. It has to be someone with this identity. And I see that need, and I am driven towards it — driven towards filling in that gap.

CHT: Ok, so before you go, you know we have a lot of frosh coming in next year, many of which may have a similar background to yours. What would you tell them? What do you wish you’d have heard before coming here?

IR: I think some of the best advice I could give is [that] there’s a lot of pressure for you to form your little social group right off the bat once you’re at college, but honestly, I think one of the best things you can do once you get to college is master being alone. Once you master being alone, you master yourself because you’re going to be by yourself your whole life.

You definitely can’t have any fear of being yourself. Williams is just a place that we all magically showed up to at one point in our lives, but it’s not our lives completely. Williams is just four years for most people. It is not the end of the world. The things that happen here are special, and it’s a magical place for sure, but it’s not your whole life. So don’t take Williams too seriously.

CHT: Anything else you want to let the Williams community know?