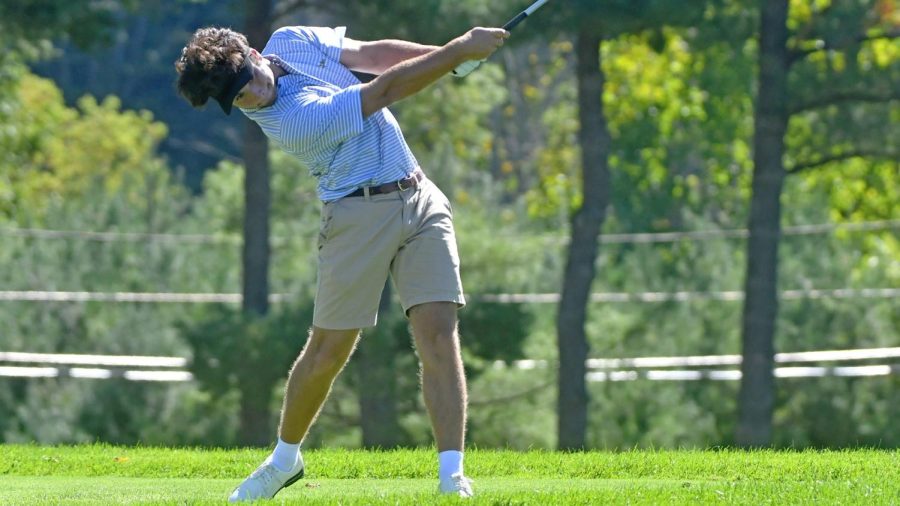 On Sunday, the men’s golf team overcame harsh weather conditions to defeat the Amherst College Mammoths during their single-day match at Taconic Golf Club. The Ephs shot a team score of 314 (+30) for the day, with the Mammoths following close behind with a score of 322 (+38).

The players battled snowy and windy conditions for the entirety of the afternoon. Winter hats and hand warmers were important accessories for the windy Sunday, as the temperatures remained in the high 30s for most of the afternoon. The players also had to deal with snow and hail throughout the round, which made putting quite the challenge for the field. Both teams were up for the challenge, however, and fought all afternoon to post good numbers.

Amherst’s Steven Chen was the tournament medalist for the day, firing an impressive 73. His 2-over par round was the result of an incredible short game, highlighted by a 40-yard hole out for birdie on the 17th hole. Leading the field for Williams was Phillip Clifton ʼ25 who shot a rock-solid 75. Clifton was in control of his round all day and stayed focused throughout, as his 75 included 14 pars and 4 bogeys. Next up for the Ephs was David Brewer ʼ22 who shot a 78. His round was highlighted by a solid short game and good course management throughout. He was one of only 3 scores in the 70s on the tough Sunday. Toby Foehl ʼ25 and Ben Sapovits ʼ25 were next up for the Ephs, shooting solid rounds of 80 and 81 respectively. Both played well all day but made a few big numbers down the stretch that hurt their chances of shooting numbers in the 70s. Rounding out the lineup for the Ephs were Thomas VanBelle ʼ22 and Wyatt Khosrowshahi ʼ22, who fired 84 and 88 respectively. Both struck the ball solid on the windy Sunday but struggled on the snowy greens throughout the day.

Also playing for the Ephs on Sunday were three individual players. John Menton ʼ22 shot a solid 82 for the day, highlighted by an impressive 30-footer for birdie on the par-five 10th hole. Peter Dohr ʼ24.5 and Jimmy DeLano ʼ22 shot a 90 and 95, respectively, for the afternoon.

Head coach Josh Hillman was encouraged by the team’s performance in the tough conditions. “We battled hard today and persevered to a nice win,” he said. “These were the hardest conditions I’ve ever seen a college event played in, but we didn’t give in. We grinded out a solid performance. We are showing strong promise as we start to enter the most important stretch of our season.”

The Ephs’ next match is the Little Three Championship against Wesleyan and Amherst at Wesleyan on Wednesday. The 36-hole match play event is a staple of NESCAC golf and will be held for the first time since the spring of 2019. The Ephs look to build off the momentum from their win into Wednesday as they prepare for their home invitational next weekend.