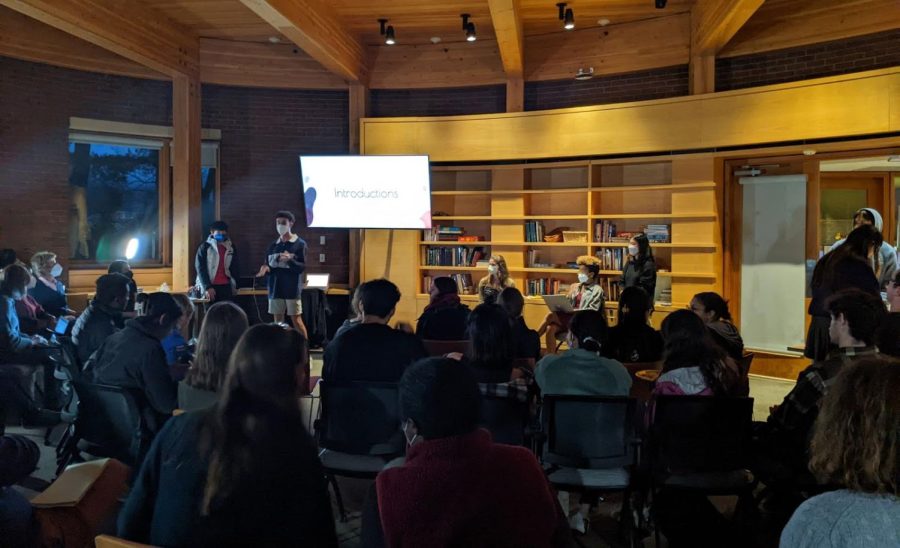 As of October 2021, 57 students had placed their names on the Integrative Wellbeing Services (IWS) waitlist for counseling appointments. IWS responded to students’ increased demand for counseling by adding 50 contract hours per week from its therapists and hiring a second contract psychiatrist, who started in February 2022, to work at the College.

At the opening of the Wellbeing Forum, held on March 17 in Paresky by the Williams Student Union (WSU), members of the WSU highlighted that while IWS issued a quick and appreciable response to an increased demand for student mental health services, students’ well-being could not be addressed entirely by a medical approach. As characterized by WSU members, this forum served as a space for students and administrators to come together to discuss how students’ emotional, physical, and overall well-being could be better accounted for at the College.

According to Jay Kim ’24, a sophomore class representative on the WSU, improving mental health and well-being on campus were topics that the WSU had been working to address for a while. “We wanted to have a space where students and admin can all converse about these topics — that’s how the idea of the Wellbeing Forum was brought about,” he said.

Kim added that the goals of the forum were twofold: to inspire discussion and activism among students and to show the College’s administration how important well-being is to students.

The forum was attended by over 70 students and saw participation from different offices on campus, including the Dean’s Office, IWS, the Office of Admissions and Financial Aid, the Athletics Department, the Office of Sexual Assault Prevention and Response (SAPR), the Chaplains’ Office, and the Davis Center.

Cooper Desmond ’24, one of the founders of the Mental Health Advocacy Group — a registered student organization that aims to communicate the state of student mental health to the College’s administration —  said he appreciated the space that the forum created for students to share their conceptions of well-being, in addition to the obstacles they faced in ensuring it at the College. “It definitely was a space that I felt people needed,” he said. “I didn’t think so many people would be willing to share truthful experiences, and I was glad that a good amount of administration showed up. I wish there were more leaders such as professors and [department] chairs because I thought a lot of what had to be said was about academics.”

At the forum, several students voiced concern over how academics and well-being seem distinct from each other on campus and called on the College to reconceptualize what it means to succeed academically. Students also touched on the pressures of meeting academic expectations while balancing their extracurriculars and social life, and, for many students, navigating structures of inequity and systemic oppression by virtue of their different social identities. Several students also asked for more robust and continuous communication between faculty, administration and students on issues of academic workload and wellbeing.

“The biggest takeaway for me is that many students feel they are living unbalanced lives – that they spend an extensive and intensive amount of time on academics,” Dean of the College Marlene Sandstrom wrote in an email to the Record. “The second big takeaway is that students are not only open to — but really eager for more opportunities to focus on their own well-being. Students talked about wanting more opportunities to engage in well-being practices as part of the PE requirement and as options during Winter Study. Students also want to see more courses in the curriculum that focus on aspects of well-being — from a scientific, historical, sociological or economic perspective.”

According to Sandstrom, the College wants to focus on providing intellectually engaged, healthy, accessible and inclusive teaching and different offices on campus,  such as IWS,  SAPR, and the Department of Athletics, have started collaborating to that end. She added that the new Center for Teaching has been established to help faculty identify and share successful practices in the realm of ‘healthy teaching’. To Sandstrom, “[this includes practices] like how to determine what might be a reasonable workload for a course or for particular classes, how to map out assignments over the length of the semester so they don’t all cluster at the same times, how to build in flexibility so that students with different learning styles can find comfortable ways to show their progress.”

Kim said he believed the forum succeeded at its goal, with many offices reaching out to WSU after the forum to hold more discussions. “I personally felt like I learned a lot, and it seemed like the admin felt the same way,” he said. “Several [members of the administration] came up to us wanting to meet with us to talk about what we could do together for the student body.”

Argenis Herrera ’22, a senior year representative on the WSU, said that the forum was one step toward addressing the mental health crisis on campus and shared some next steps for the WSU.  “In the coming weeks we will be producing an extensive survival guide to Williams that will include mental health and well-being resources, ways to navigate the campus bureaucracy, and tips for getting what you want while here,” he said. “We really hope to keep this topic relevant and to continue to highlight the plight of the student. Our work will not be done until we can overcome these difficulties as a community.”