2500 miles on a bike: Artie Carpenter ’25 cycles across America 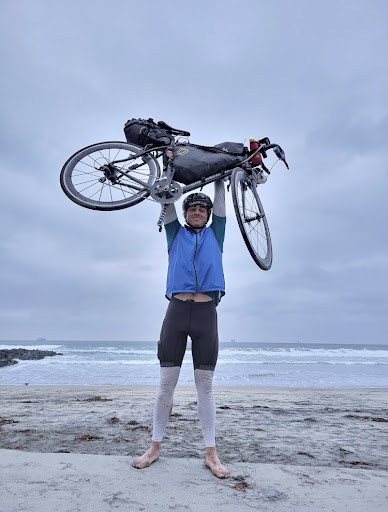 Artie Carpenter (first) biked past the sand dunes of the Gulf Islands National Seashore (second) and the east bank of the Mississippi River (third) to conclude his 2500-mile bike ride to Imperial Beach in San Diego. (Photos courtesy of Artie Carpenter.)

There are 2445 miles stretching between the loblolly pine trees around Jacksonville, Fla., and the waves crashing upon Imperial Beach south of San Diego, Calif. Between lies the rolling white dunes of the Gulf Islands National Seashore, elegant saguaro cacti of the Southwest, and the towering In-Ko-Pah Mountains in Southern California. To make it from Jacksonville to San Diego in two weeks, one would have to travel an average of 175 miles a day, so while it is a long trip, it would be relatively easy in a car. But when Artie Carpenter ’25 made the trip over spring break, it wasn’t in a car; it was on the back of what he described as his “trusted steed”: his bicycle.

While this cross-continental ride isn’t Carpenter’s longest trip — that title goes to the 3100-mile trip he took on his gap year in September 2020 from Brooklyn, N.Y., to Marin County, Calif. — it is his most intense, since he needed to bike for more miles per day to make it in time. This trip was the latest of a series of biking adventures that extend all the way back to his childhood.

In ninth grade, Carpenter went on his first long-distance bike trip. Together with a friend, he decided to bike 50 miles north of his home in Brooklyn to Bear Mountain State Park, N.Y. It was disastrous, to the point where the two ended up taking a full day to reach the park when it should have only taken them a few hours. Despite the unexpected detour, Carpenter was hooked. “It was still a lot of fun,” he said. “It was the longest I’d been on a bike in one day, and then it just continued from there.”

Trips these days for Carpenter range from cross-country voyages to casual rides up into Vermont or down Route 43 to something in between, like a trip he took to the border of Canada during reading period last fall. “I set these kinds of destinations for myself that don’t really matter,” he said. “They give me enough time where I can really have a fun, memorable journey there.”

Carpenter barely does any planning for his trips, either, preferring instead to explore whatever place he finds himself in while on the road. “In general, it’s extremely simple,” he said, speaking about his most recent bike ride to San Diego. “You just wake up, and you bike west. That’s it.”

That mindset has taken Carpenter to some interesting places, like a lively restaurant in Lufkin, Texas. With his biking gear and attire, he naturally drew the attention of the patrons, who asked him what he was doing. From there, he was sucked into conversation, and they even bought him a second dinner. “It puts people in a good mood to hear about something that they don’t encounter in everyday life,” he said.

According to Carpenter, this kindness isn’t an uncommon occurrence. “They see [me] and [my] position, and the kind of mileage [I’m] doing, and they want to help out,” he said. “Whenever I’m buying more Clif bars at a grocery store, often people ask me what I’m doing, and I tell them, and then they’ll say, ‘I’m gonna pray for you’ or things like that.”

Of course, not everything goes perfectly. Because of the distance he had to travel every day on his trip from Florida to California, maintaining his energy was a challenge. “It was two weeks, but it felt like two months, just because I was awake for so long,” Carpenter said. “I was getting six hours of sleep a night.” This was made worse in West Texas and New Mexico, where strong headwinds slowed him down, and he had to stay on the bike for longer to make up for lost time.

The weather also wasn’t always nice; Carpenter recalled a day when the temperature jumped from the upper 30s to the mid 90s in the span of half a day. He also had to deal with multiple flat tires, once because he ran through a patch of thorns that took out both tires until he could repair them.

Perhaps the most extreme aspect of these long bike rides was the lack of human interaction for hours on end, but Carpenter said that he took it all in stride. “You can’t expect it to be seamless, doing that distance in two weeks,” he said. “And so it was just kind of like another challenge that you deal with.”

“That’s one of the elements that makes it memorable, and that makes you really feel like you’re doing something that you’re not gonna forget and be able to tell stories from it,” he added.

To get through the hardest parts of the journey, Carpenter said that he developed a strategy. “I see a signpost, and I say, ‘Alright, get to there,’ then make it to the next little feature in the road, and you just kind of keep building,” he said. “You build on small wins in that way. And then eventually, the miles just tick by, and you’re able to make pretty long distances.”

At the end of the two weeks, Carpenter had made it to the shores of Southern California. It was cold and cloudy, and he couldn’t see the ocean until he was 20 seconds away from his destination, but that didn’t take away from his feeling of celebration and accomplishment. “You’ve done something crazy, and now, you can just rest and take a break, and you don’t need to get back on the bike the next day,” he said.

For now, Carpenter said that he hopes to bike more often around campus as the days get warmer and continue competing with the cycling team. But once summer arrives, it’s practically guaranteed that he will be back on his bike for hours on end again.

“These big trips are like an ode to a bicycle,” he said. “It’s just like an amazing piece of machinery. The more I go, the more I’m like, ‘Holy crap’… The more people [bike], the better off we’ll be.”