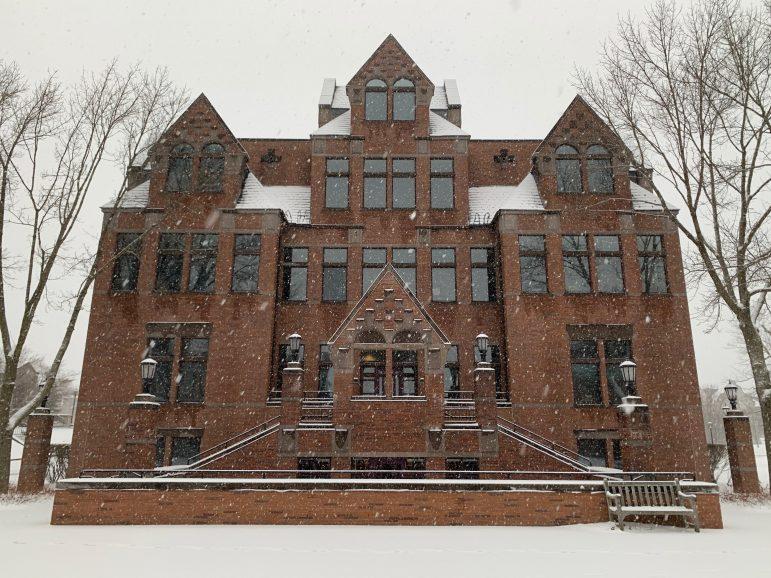 The administration hopes to lift the mask mandate for students in class the week after spring break, which ends on April 4, if the number of COVID-19 cases remains low as students return to campus.

Before committing to the policy change, the College will assess campus and local COVID data, Mandel noted at the March 16 faculty meeting. “We do hope to go to optional masking in classrooms after spring break,” she said.

She clarified in an email to the Record that the move to optional masking in classes would begin a week after spring break if “our results are as low as they have been for the last few weeks.” There have been six positive test results in the last week, and the positivity rate has stayed below 1 percent since mid-February.

Director of Libraries Jonathan Miller also announced at the faculty meeting that the mask mandate for the libraries will end on Monday, March 21 — the first day of spring break. At that point, he said, masking in libraries will be “welcomed and encouraged” but no longer required.

Mandel stressed that students and faculty alike should feel free to continue masking even if the classroom mandate lifts in April. “The word ‘optional’ means optional,” she said.

Current policy allows faculty members to unmask in class but requires students to mask in class under all circumstances. As of Feb. 28, masking is optional for students in most settings outside of the libraries and the classroom, including in academic and administrative buildings (while not in class) and in athletic facilities.

At the faculty meeting, Chair of Romance Languages and Professor of French and Comparative Literature Brian Martin raised concerns about the intended lifting of the classroom mask mandate. Participating in the hybrid meeting virtually, he stressed that the pandemic was not over and requested that the administration “consider the possibility that everyone keep masking in classrooms until the end of the year.” “We’re only talking about six weeks,” he added.

“I didn’t mean to say that [the policy change] is definitively decided,” Mandel clarified in response to Martin’s comment.

The often complicated politics surrounding masking were on display at the faculty meeting at which Mandel announced the planned policy change. In her opening remarks, an unmasked Mandel noted that masks were optional at the meeting. Several other members of senior staff — including Dean of the College Marlene Sandstrom, Provost Dukes Love, and Dean of Admission and Student Financial Services Liz Creighton ’01 — were also unmasked. The majority of faculty attendees, however, remained masked.