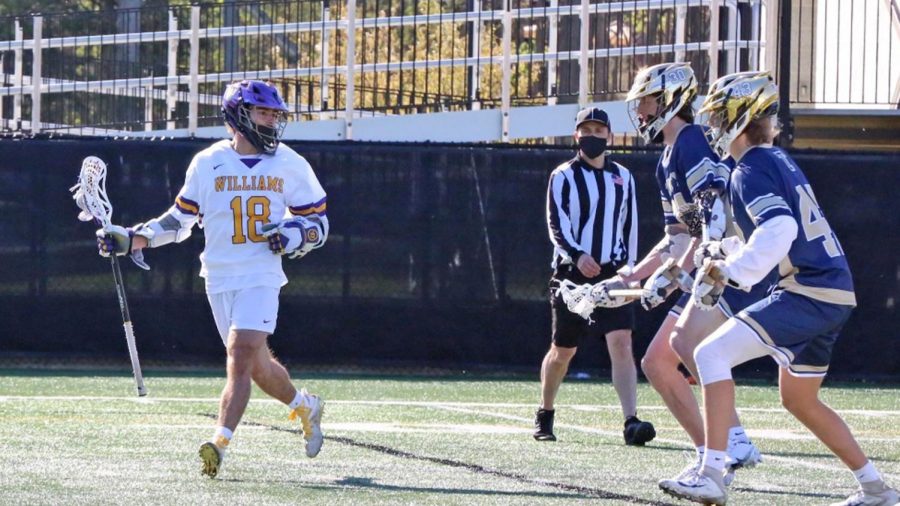 This past Saturday, men’s lacrosse defeated Trinity College away, 9-5, in its first game of the season. Trinity opened the scoring with 9:31 left in the first quarter when Graham Penfield set up Connor McCulloch with a pass. McCulloch was able to beat Eph goalie Matt Freitas ’23 to put the Bantams on top.

Williams responded to the Bantam goal with four straight goals. Spencer Goodbar ’23 scored the first Eph goal of the season with 5:21 left on the clock in the first quarter to tie the game 1-1. Just over a minute later, Jake Haase ’22 tallied another goal to put the Ephs on top 2-1 — a lead they would not relinquish.

The Ephs raised their lead to three goals in the second quarter when Goodbar tallied his second goal off a feed from Pearse Glavin ’24.

Trinity responded with two goals in a row, one by Jake Baker and one by Ryan Werner, with McCulloch getting credit for an assist on both Bantam scores. However, with 1:37 to go before the half, Caputo scored his second goal off a Haase feed to put Williams up 5-3.

Williams tallied three goals in the first seven minutes of the third quarter to up their lead to five goals. Jesse Shapiro ’25 scored a man-up goal with Glavin assisting. Just 28 seconds later, Caputo scored his third goal of the contest with Owen Roegge ’23 registering the assist. This was followed by a goal from Ian Di Pietro ’23, assisted by Eddie Loyd ’25, to give the Ephs an 8-3 lead.

The Ephs’ ninth and final goal was an unassisted score by Haase in the fourth quarter.

“I thought our defense played really well today, and Matt Freitas had a good day in the cage, making 15 saves,” Eph Head Coach George McCormack said. “The defense played at a really high level. We were opportunistic on offense and it was a good way to start the season on the road against a good Trinity team.”

The Ephs will host Union College on Thursday at Farley-Lamb Field at 5:00 p.m.