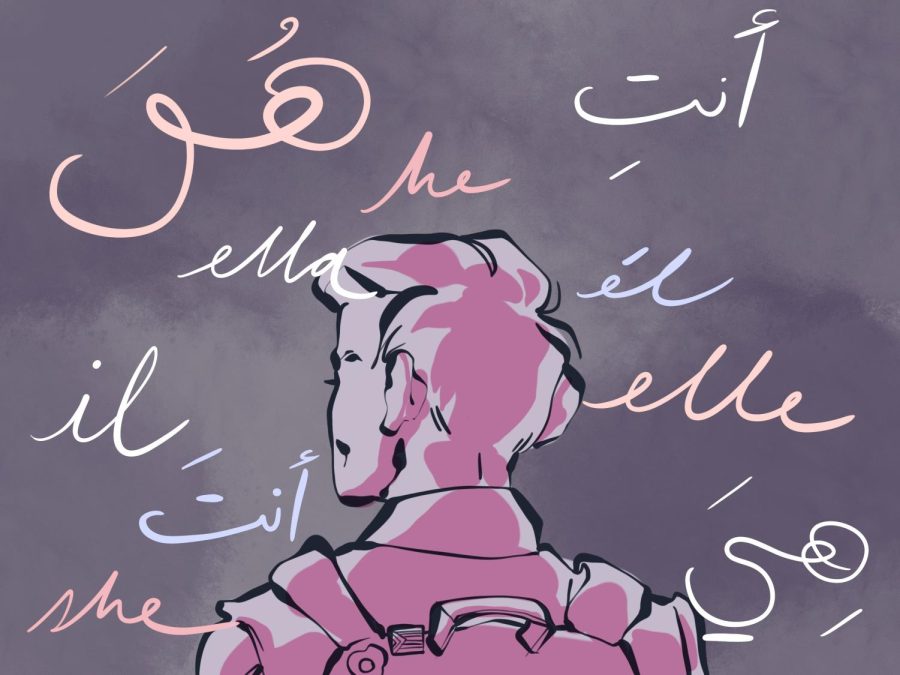 Many foreign languages are grammatically gendered, a structure that poses challenges to efforts of gender inclusiveness. (Ava Burr/The Williams Record)

As the English language has begun to recognize gender-expansiveness through the usage of pronouns like the singular “they” and “them,” the College has made similar advancements for gender inclusivity. In 2018, students’ pronouns became visible on their GLOW profiles, and in recent years, club and varsity sports have seen shifts toward gender-expansiveness. However, in the classroom, professors of languages including Spanish, French, Russian, and Arabic have faced challenges incorporating gender neutral language because of the grammatically-gendered nature of these languages. The Record spoke with professors about how they are adapting their classes.

How languages are (and are not) changing

Rouhi said she was happy to see how Spanish speakers at the College and beyond are confronting the traditional rules of Spanish grammar to include gender neutral language. “What’s great about Williams — and so many other places in Spain and in Latin America and many other colleges and universities — is that we are coming up with very creative and very logical ways to address that,” she said. “For example, many of us in the classroom no longer say ‘los amigos.’ We would say ‘les amiges.’”

Spanish Teaching Associate (TA) Gabriel Fernández said that they were proud of the growing inclusion of gender neutral language that has taken place in their home country, Argentina. According to Fernández, politicians have started to use the gender neutral word “todes” (“everyone”) in speeches, rather than the gendered terms “todos” or “todas.” Furthermore, many books used in Argentinian universities have begun to use gender-inclusive language, they said. Fernández, who uses all pronouns, said, “I’m really happy with all these things that are going on right now… I’m not invisible anymore.”

Similar advances have been made in French with the use of gender neutral pronouns, such as the subject pronouns “iel” (singular) and “iels” (plural). Le Robert, one of France’s leading dictionaries, recognized these non-gender specific pronouns last November.

Professor of Francophone Literature, French Language, and Comparative Literature and Chair of Arabic Studies Katarzyna Pieprzak explained that a range of inclusive language options in French are actively being developed. “There’s also new words that are being formed,” she said.  “For example, if you want to say ‘cousin,’ you could say ‘cousin,’ which is masculine, or ‘cousine’” [which is feminine] — and then there’s a new [gender-neutral] word which would be ‘cousaine.’”

However, these are ongoing developments, many of which have been challenged.  “There are people that say that adding anything to the language is somehow destroying it,” Pieprzak said.

For example, linguistic institutions like the Royal Spanish Academy (RAE) and the Académie Française that are responsible for standardizing their respective languages have not recognized gender neutral terminology. The RAE’s Spanish style guide, which was published in 2018, rejects “todos y todas,” “todes,” “todxs,” and “[email protected]” as alternatives to the masculine “todos.”

And some languages have seen nearly no changes. According to Assistant Professor of Russian Olga Kim, many Russian-speaking countries have not yet introduced gender neutral language. “[Nonbinary pronouns are] still not adopted officially in Russian, and most of the people will not understand if you refer in nonbinary pronouns,” Kim said.

Associate Professor of Arabic studies Lama Nassif described how Arabic has remained a highly gendered language, explaining that any modifications to Modern Standard Arabic — which, with Classical (or Quranic) Arabic, is referred to as “the formal Arabic” by Arabic speakers — would have implications beyond the linguistic realm. “Modern Standard Arabic has important indexical meanings,” she wrote in an email to the Record. “It is a descendant of Classical Arabic, the language of the Quran, and is considered a symbol of pan-Arabism as the official language of all Arab countries and a connection with a rich heritage. Changes could involve ideological, political, and religious challenges.”

In the Chinese department, professors at the College do not have to account for gender in the way other language departments have, given that gender does not play a large grammatical role in the languages they teach. “That being said, it doesn’t mean that there are no challenges in our daily classroom teaching,” Chair of Asian Languages, Literatures, and Cultures and Professor of Chinese Li Yu wrote in an email to the Record. “Traditional Chinese culture is still very much fixated on [the] gender binary and the heteorsexual norm.”

How professors are including gender neutral language

Former Assistant Professor of French Cécile Tresfels organized a discussion on the inclusion of gender neutral language across all of the departments in the Center for Foreign Languages, Literatures, and Cultures last year, according to Pieprzak. This is reflective of heightened awareness about gender inclusivity regarding language classes, Pieprzak explained.

“We don’t have any formal, strict guidelines in place right now,” Rouhi said. “However, my sense from all of my colleagues is that most, if not all, of us are doing everything we can to create an environment that is sensitive to inclusivity and to nonbinary genders.”

Pieprzak said that she has also been looking to developments in French-speaking countries to inform her approach to gender inclusivity. “There are queer and feminist communities that have been doing a lot of work in French-speaking countries to advance the use and recognition of gender neutral pronouns,” she said. “They have done all this work, and, as a French professor, I am trying to learn from them.”

Pieprzak and her colleagues have been introducing the gender-neutral pronoun “iel” starting in introductory French classes, she said. “Whether or not we have students who use gender-neutral pronouns, it’s just important for all of our students to know the right words, to address people respectfully, and to acknowledge their identities,” she said. “Our textbook doesn’t do that, and so what we’ve done is we’re introducing the pronouns along with the textbook.”

Visiting Assistant Professor of Spanish Carolina Melgarejo-Torres, who is currently researching the ways in which nonbinary language options are becoming available in Spanish, also identified challenges posed by limited educational resources that discuss gender neutrality in Spanish. “We are working with grammar books that are very normative in that respect, probably because they are old books or they are not as recent as the phenomenon,” she said.

Nikolai Wolfe ’24, a student in Spanish 104 who uses they/them pronouns, also acknowledged the delicate position that language professors find themselves in. “The professors have the task of both teaching us how the language is used generally and then also staying on top of how we reinvent a language to accommodate people with gender neutral pronouns,” they said. “They’ve done a pretty good job at doing both … and they’ve also done pretty well at giving us terms that aren’t traditional, like ‘chosen family,’ ‘nonbinary’ — those sorts of terms. I think the TAs have been the biggest source of that because they structure their classes specifically around these sorts of topics.”

According to Fernández, Melgarejo-Torres encouraged TAs to plan classes that would explain changes in the language and promote the use of gender inclusive terms. As an activity during one of his sessions, Fernández said that he handed out a political speech that was all in masculine generic and asked the students to change it to gender neutral language.

Melgarejo-Torres also teaches her students about the historical opposition to changes in the Spanish language, she said. “We talked about how in Spanish, for instance, there were certain factors — social factors, institutional factors — that created a very rigid perspective on the language because it was linked with monarchy, and there was this idea of purism around the language that was hailed by the academia and that still prevails,” she said. “It is very important for students to understand both that language changes, that language has always changed … and, on the other hand, that there is always going to be opposition to those changes.”

In discussing the question of gender inclusivity in language, Melgarejo-Torres emphasized that it’s important to recognize that the College has the privilege to consider these issues while many other places don’t. “There are other sectors in the society that just don’t have the resources or the context to discuss this and to think if language should be inclusive, primarily because they are dealing with other enormous issues in their [daily] life and they just don’t have the intellectual resources around them to make this discussion,” she said. “So that is very important to give an entire view of the phenomenon.”

For languages like Arabic and Russian that have not seen significant changes towards gender inclusivity, professors have been adapting in their own ways. If Nassif has a nonbinary student in her class, she notifies them of the option to use the plural pronoun, she said.

Kim also chooses to use plural pronouns to stand in for gender-neutral ones in her classes because they maintain gender neutrality without breaking existing grammatical rules or creating new suffixes that do not exist in the Russian language, she said. However, creating new norms in the classroom that don’t exist elsewhere can raise its own issues. “When you teach here in the West, we adopt something like an alternative, but then when [students] actually go to the target country, they will not be understood,” Kim said. “That’s also a problem.”

Despite difficulty and opposition, professors, students, and TAs in foreign languages at the College agree that gender in languages should be interrogated and discussed. “You have to consider that the language is entrenching all these inequalities and hierarchies,” Kim said. “Language is not fixed and forever.”

April Owens ’24, a student currently taking RLSP 104, said that she believes that language should reflect society’s values and evolving views on gender. “I think it’s really important for language to keep up with the times,” she said. “The way we use language has a really powerful effect on the way we think and the way we see the world.”