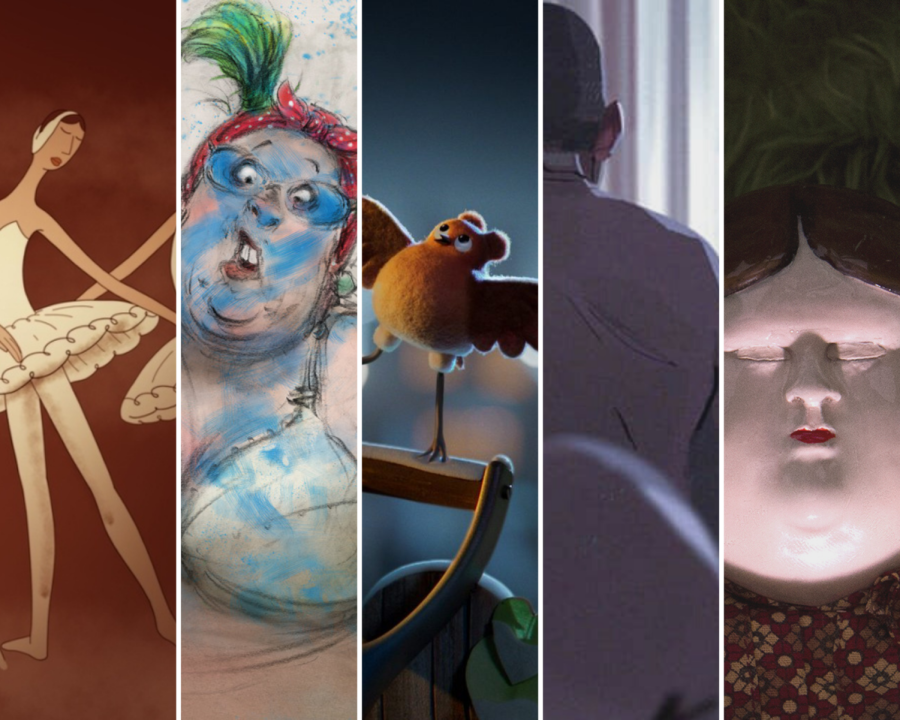 The Animated Shorts Oscars category is always a tense competition, and this year rounded up five powerful films from six different countries: Robin, Robin, БоксБалет (Boxballet), Affairs of the Art, Bestia, and The Windshield Wiper. Previous winners reflect the category’s history of showcasing socially influential and compelling stories that have inspired millions to act with more compassion, acceptance, and love. This year’s shorts are no different, and explore the intricacies of what it means to love, to be different, and to make art. Despite the nominees being on-par with full-length films nominated in other categories, nominated shorts are often overlooked by audiences as a result of a lack of screenings and free availability through streaming platforms. Regardless, this year’s animated shorts are worthy of praise for their mastery of short-form storytelling, artistic techniques, and voice talents.

Images’ showing of the animated short films started with Robin, Robin, a British stop-motion musical created by Dan Ojari and Mikey Please. The short follows the adventures of a baby robin raised by a family of mice as she clumsily navigates the frustrations of not fitting in. The robin’s determination to prove herself a “mouse” worthy of her family involves donning fake mouse ears, breaking into a “hooman” house to steal the star from a Christmas tree, playing hide-and-seek with a cat voiced by Gillian Anderson, and befriending a flightless magpie with an obsession over human doodads. The fuzzy needle-felt puppets and soft background lightning accentuate the glowing warmth pervasive throughout the film.

The screening continued with Boxballet, a Russian short directed by Anton Dyakov. The 2D animation explores the shy, blossoming relationship between burly boxer Evgeny and delicate ballerina Olya. The contrast between the characters’ lifestyles brings into question whether their relationship will succeed while external pressures intensify as the ballerina is continuously pursued by a predatory ballet director and the boxer falls from success and fame. The animation style pushes the boundaries of reality, as the ballerina’s limbs bend like modeling clay and boxing sequences are cartoonishly over-exaggerated. While no line of dialogue is ever spoken between Olya and Evgeny, the simple yet remarkably expressive animation places a melancholy and intimate spin on the mundanity of their lives, leaving the audience rooting for their relationship.

These first two pieces were followed by a viewer discretion warning claiming the final three shorts are for adult viewership only. Indeed, the gorgeous animation styles of the succeeding shorts were accompanied by graphic nudity, sex, violence, and even bestiality.

Affairs of the Art is a British-Canadian short created by Joanna Quinn and Les Mills. This short explores the childhood, and then adulthood, of Beryl, a dissatisfied factory worker, mother, and wannabe hyper-futurist artist. Throughout the short, she reflects on her family’s eccentric obsessions such as taxidermy, pickling, communism, and art. The short utilized about 15,000 distinct drawings, and the hand-drawn pencil sketches pulsate with color and movement and are complemented by witty dialogue. Overall, this short stresses the importance of dancing to one’s own beat and pursuing one’s passions, no matter how outlandish they might seem.

Chile’s animated short nominee is Bestia (Beast), directed by Hugo Covarrubias and Tevo Díaz. Set during the military dictatorship in Chile and based on the life of Íngrid Olderöck, Bestia follows the daily life of an unnamed secret police agent. The short intentionally blurs the lines between the character’s nightmares and her increasingly disturbing worklife, as she — represented by a shiny ceramic doll — and her needle-felt dog navigate a life of scrap-fabric body bags and cardboard bullets. The film’s success in using an otherwise “cute” stop-motion style to translate disconcerting emotions and mature themes makes it a prime example of the powerful statements emphasized by animation when the medium is not catered to a young audience.

The final piece of the screening was The Windshield Wiper, a Spanish-American short directed by Alberto Mielgo and Leo Sanchez. The short opens with a chainsmoker in a bustling cafe, who looks directly at the audience and asks, “What is love?” The film then explores this question through a montage that illustrates the ups and downs of the modern pursuit of romantic relationships, offering audience members the chance to come to a conclusion of  their own. The melding of 2D and 3D animation evokes the style of Marvel Entertainment’s Into the Spiderverse in 2018 (indeed, Mielgo worked on that movie as well). The graphic novel design and bright, neon colors romanticize quick glimpses into couples’ lives.

In response to dwindling viewership numbers over the past few years, the Academy of Motion Picture Arts and Science announced on Feb. 22 that it would be cutting eight categories from the televised awards lineup — including all three Short Films categories. This move evoked immediate backlash from nominees and audiences alike, sparking arguments that the Academy undervalued the contributions of the casts and crews of nominated shorts, along with the makeup artists, hair stylists, composers, and production and sound designers whose categories were also completely cut. Barring nominees like those in the Animated Shorts category strips artists of the opportunity to achieve more widespread recognition for their groundbreaking work. Such a decision begs the question: What, besides existing notoriety of nominees, makes categories like Best Actor or Best Adapted Screenplay more crucial to broadcast than the shorts? The move only contributes to the clouding of widespread artistic recognition and respect with the allure and glamor of already established mainstream fame, and does not give a more representative slice of artists and creators an equal playing field to see their hard work pay off.

This year’s Animated Shorts nominees demonstrate the artistry of a diverse array of animation styles as well as a range of emotions. The countless hours put into these shorts and the messages they urge audiences to consider are invaluable and should not be downplayed by the Academy.

Images is screening nominees for three out of the 23 Oscars categories — Documentary Shorts, Live Action Shorts, and Animated Shorts — until March 3.