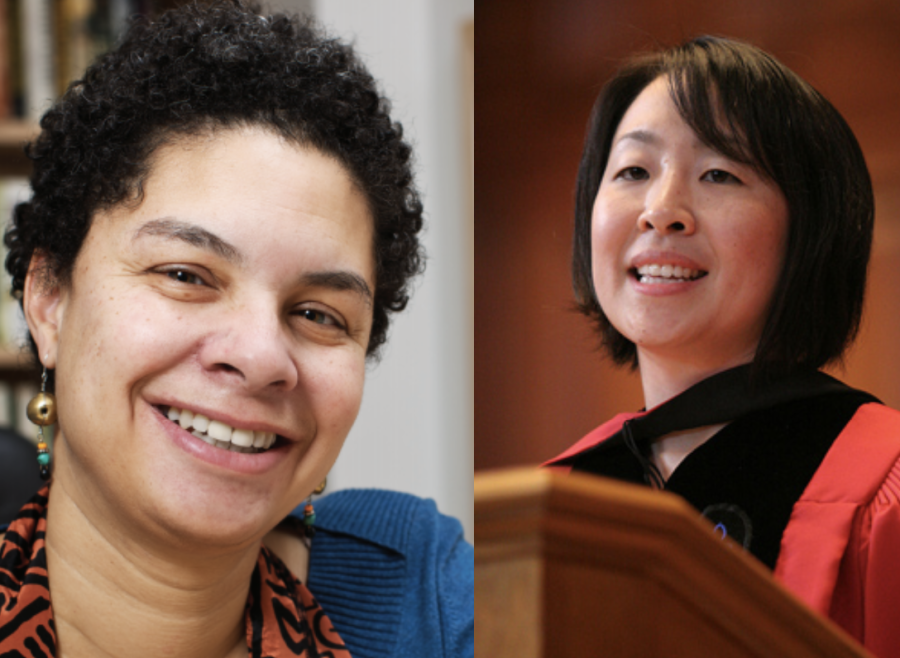 Both Long and Siniawer are currently professors of history at the College (Photos courtesy of Williams College).

Professors of History Gretchen Long and Eiko Maruko Siniawer ’97 spoke with the Record about their eagerness to serve as the next Dean of the College and Provost, respectively, the selection process, and their priorities.

According to Long, who once served on the Faculty Steering Committee (FSC) herself, throughout the fall 2021 semester, the FSC solicited nominations and self-nominations, as it typically does when senior staff positions become vacant. President of the College Maud S. Mandel then interviewed the candidates.

Long said that her two interviews with Mandel felt very much like a dialogue, one where she could ask questions about what being Dean of the College entails. “I quite enjoyed that [Mandel] had this [dean] job pretty much at Brown [University], so I really trusted what she said about what’s hard and what’s fun and all that,” Long added.

Long first came to the College directly from graduate school, hoping to finish her dissertation and teach history at the same time. She later became the Faculty Director of the Williams-Exeter Programme at Oxford (WEPO). “I think my work at WEPO taught me a lot about seeing students balancing a lot of work with also exploring a new place,” she said.

While being Dean of the College will have a learning curve for Long, it is one she is looking forward to. “I try to be curious, and I try to read and learn — I have a lot to learn,” she said. “It’s not really like things I’ve done before. I’ve had [a] little taste of it, but I’m looking forward to seeing the College in a more holistic view.”

Coming into the role, Long hopes she can help students learn to take advantage of their four years here, she told the Record. “Not with an expectation that everything’s always going to be great — that’s not realistic or even desirable — but I hope that we can support students through hard times and really inspire them and send them out confident and curious and ready to do their thing,” she said.

To that end, Long is hoping to, among other things, address mental health issues on campus, keeping in mind the impacts of the COVID-19 pandemic and ensuing restrictions on student life. “My youngest child is a freshman right now — not at Williams, somewhere else — and I am quite aware, just from living with someone of that age, [that] COVID has been part of his life and everyone’s at Williams,” she said. “We have to be sensitive to it, [to] how much this has shaped [College life],” she said.

Like Long, Siniawer started at the College immediately following graduate school, beginning as an assistant professor of history in 2003.

For Siniawer, becoming Provost is a natural extension of her current work and interests. “In my scholarly, educational, and administrative work thus far, I have been drawn to questions about how institutions work — how people determine what to value and what to prioritize, and how we go about trying to realize those aspirations,” she wrote. “I am also very much the product of a liberal arts education — I’m excited by thinking through a variety of issues in a variety of ways, and by continuing to learn through the exchange of ideas.”

Siniawer already has some experience with the domain of the Provost and is eager to become more involved in and learn about her new role and the College over the next few months. “I have been the chair of the Committee on Priorities and Resources for four of the last five years, so [I] have had a window into the development of various strategic initiatives, the state of the college’s finances, and questions of resource allocation,” she wrote. “In other positions as well, I’ve had the opportunity to work closely with faculty, staff, and students on a variety of issues.”

As Provost, Siniawer hopes to increase transparency and continue pursuing initiatives to make a Williams education more accessible. “I am excited about building on Provost [Dukes] Love’s significant work, particularly when it comes to supporting the college’s commitment to true affordability, promoting the arts at Williams, and integrating environmental sustainability with what we do and how we operate as a college,” she wrote. “I also hope to communicate openly about the College’s finances (working together with [Vice President for Finance & Operations and Treasurer] Mike Wagner), priorities, and tradeoffs, and to be in constant conversation with colleagues and students about how best to advance the central academic and educational mission of the College.”