One in Two Thousand: Sophie Bellwoar ’25 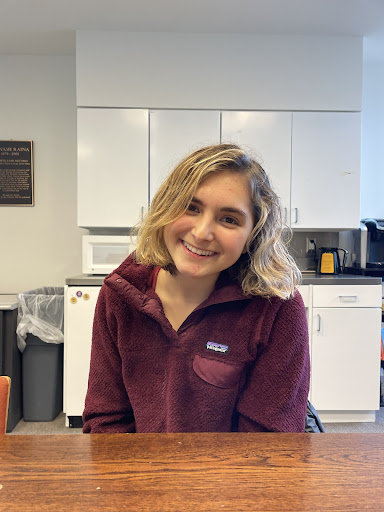 Each week, we randomly select a unix from a list of all current students at the College for our One in Two Thousand feature. As long as the owner of a selected unix is willing to be interviewed and is not a member of the Record board, that person becomes the subject of our interview. This week, the computer (using a script in R) chose Sophie Bellwoar ’25, who discussed her love for running, her involvement with the comedy scene on campus, and her role on the WCFM board. This interview has been edited for length and clarity.

Izzy Polanco (IP): So, we actually go way back to the beginning of freshman fall — but before that, I knew you as “the girl who runs around campus.” Can you tell us about your experience as a runner and how you got started?

Sophie Bellwoar (SB): Ooh, how honest can I be in this interview?

IP: You can be totally honest.

SB: I started when I was a freshman in high school, and my mom told me, “You can either go to therapy, or you can start running.” [Laughs.] So I started running, and then I went to therapy later. And I got really into [running]. It became a really great thing for my mom and me to do. We would go on runs, and we’d talk the whole time. It was great for our relationship as mother and daughter, and it also taught me to love running. We ran lots of races together — we did a couple of half marathons and a marathon together.

I really got into it again over [quarantine] as a way to relieve stress. I hated going to online [high school], so instead of sitting during online classes, I would just run. I’d go on these crazy two-hour-long runs because I had nothing to do.

SB: When I came [to Williams], there was no running club. So a friend of mine, Nelson del Tufo [’25], and I started a running club together, and then running also became this thing for me to share … with new runners and with new friends. It also definitely became a method of really finding my way around the campus when I first got here — that’s why people knew me as “the girl that runs,” because I would run these huge loops around the campus, just trying to find my way around and figure out where everything was. So you would see me run past buildings five or six times. And it’s because I was just running in a really big circle.

IP: Speaking of running, tell us about your gap year, where you worked at a running store.

SB: I took a gap year because… I didn’t want to go to online school during COVID. So I spent it working at a running store in the town that I live in currently [Glastonbury, Conn.]. I’d actually been going to that running store for five years. And then, I went in one day, and I really vibed with the people working there, and I was like, “You guys, hire me.” So I spent a whole year working there, and I learned so much about running shoes — way more about running shoes than anybody should know. [Laughs.] I have this neat little party trick where I can kind of guess people’s shoe sizes.

SB: My bad. I’ve definitely gotten worse at it because I don’t use the [measuring] device anymore. But I was really good at it — I had been sizing people consistently for a year. But I still have a huge knowledge of running shoes.

IP: What’s the most niche fact about running shoes that you know?

SB: [Long pause.] Okay. When they first started making running shoes, people’s feet would rotate, and they added medial posts made out of hard pieces of plastic that were attached to the side of the shoe. Problem is, most people don’t need that much support, and the shoes overcorrected the issue. So then, they started instituting guiderails to help people’s feet roll both inwards and outwards. And this was huge because you could sell these shoes to literally anybody, and they were really cost-effective. So they’re a symbol of innovation, but also the corporate greed of the running industry that is constantly trying to increase their profit margins. [Laughs.]

IP: OK — switching gears. You’re involved with the comedy groups on campus. Can you tell us a joke?

SB: That’s always a hard question. My go-to joke is always this one: Why do duck tails have feathers?

SB: To cover their butt quacks. [Laughs.] The joke is horrible, I hate it, but that’s a really hard question.

IP: Tell us more about your involvement with The Haystack and PAC [Perennial Amateurs Convention].

SB: It’s really fun. I have a lot of fun making things that I think are funny. It has little to do with the performing aspect for me, especially with The Haystack, where a lot of times, I’ll write headlines that I know won’t get published because they’re too weird or too specific. But I love writing them because it makes me laugh.

SB:  I usually go to the gym and walk on the treadmill, and I just think about what happened during my week, and I try to clear my head and come up with stuff.

IP: Speaking of the gym, sources tell me that you’ve recently been involved with the squash scene on campus.

SB: So I started squash because it was the only Physical Education class that worked with my schedule. So I started playing, and it’s really fun. I love the fact that you have little moves that you do, and you have to think about it really hard. And there’s skill and technique, and the ball was really bouncy. And it makes me feel really fancy too.

IP: Following up on that, are you any good at squash?

IP: OK, switching gears again — tell us about your new position on the WCFM board.

SB: I’m a social media coordinator. I really like meeting people on the board, and learning new music is also very cool. But I think the coolest thing is getting to organize WCFM events. We’re trying to get a couple of different musical groups to come to campus this spring, and even having the option to put my favorite bands into the running is really exciting for me, and I love being involved.

IP: Is there anything that I haven’t asked you about that you think that the Williams community should know about you?

SB: That’s a really good question. [Pause.] Oh, the Williams community introduced me to Nutella. Before I came here, I’d never had Nutella before. Then, I went on my WOOLF trip, and they had Nutella, and I was like, “I’ve never had this before.” So I tried it — I went on a Nutella bender for two weeks. [Laughs.] I ate Nutella almost every day. It was bad. I had a diet of mostly Nutella. It was truly a weird and fun experience, and I’m grateful to have had more of those at Williams since then.