40 years ago, students pushed for divestment from apartheid 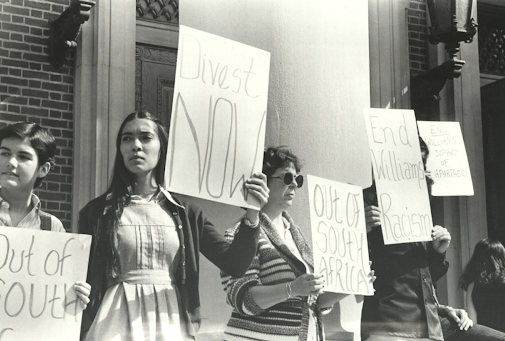 On Nov. 12, 2021, students unfurled a banner that read “Williams Must Divest” from the upper balcony of Paresky. The banner is a part of an ongoing divestment campaign led by the Young Democratic Socialists of America (YDSA) at the College. It’s a campaign that entails protests, teach-ins, and collaboration with other campus advocacy groups like the Williams Environmental Council, the International Students Association, and the Black Student Union in order to encourage full divestment from fossil fuels on the part of the College.

While campus movements in recent years, both at the College and nationally, have focused on divestment from fossil fuels, a very different movement took place about 40 years ago, when students on campus were campaigning for divestment from the South African apartheid state, a movement which lasted nearly 10 years.

In 1978, students, faculty, and staff at the College began investigating the role of College investments in South Africa. On Feb. 28, 1978, the Record printed an article entitled “Group investigates divestiture.” The article outlined the formation of a subcommittee of the Thursday Night Coalition (TNC), an alliance between members of the Williams Feminist Alliance, the Black Student Union, Americans for Democratic Action, and the Gay Support Organization. The subgroup would coordinate activities investigating racism and apartheid in South Africa. The article reported, “In January, the Board of Trustees was presented with signed petitions and proposals for a plan of divestiture. According to [Steve] Horton [’78], this was the first time that the Trustees had ever been presented with a moral side to the issue of investment practices.” While students carried out the majority of the activist work, various professors supported their causes, often spreading petitions in support of divestment as well.

According to the Feb. 28 Record article, “the immediate goal of the subcommittee on divestiture … is to prepare the campus to take a stand on the issues involving apartheid in South Africa, and Williams’ role in supporting the country’s white minority regime with College-owned stocks.”

The article went on to note that Horton, a leader of the subcommittee, was planning other events surrounding divestiture in the coming months, including a letter-writing campaign to congressmen, rallies, and the possibility of a mass demonstration on campus.

In addition, faculty and staff supported the burgeoning student movement. A committee named “Williams College Faculty and Staff for Divestiture” put forward a petition urging the College to “use its holdings in corporations in South Africa to alter corporate investment policy. Failing that outcome, Williams should reject further complicity with the policies of apartheid by divesting itself of stock in corporations operating in South Africa.”

In March 1978, TNC members met with then-President John W. Chandler. According to the Record, the TNC expressed “dissatisfaction over the College’s lack of an overall investment policy, its investments in companies operating in South Africa, and the recently created shareholder committee.” Chandler stated that only $100,000 of Williams investments were actually tied up in South Africa.

It’s difficult to pin an exact numeric value onto the extent that the College profited from operations in South Africa. Investments fluctuated from 1978–1987, and while the College eventually removed all direct investment from the regime, it did still invest in companies like General Electric, Warner Communications, and Monsanto that conducted operations in South Africa, according to a Berkshire Eagle article published on Jan. 26, 1983. The College’s investment in multinational companies that were not directly involved in South Africa but had operations there in some form continued to be the primary object of student protest.

Francis Oakley, dean of the faculty from 1977 to 1984, who became president of the College in 1985, opposed a policy of complete divestment. “There were issues with colleges that were stewards of money given by donors for educational purposes, say perhaps to support financial aid,” he said in an interview with the Record. “So to be a good steward of that [money], you should invest effectively to bring a return. There is a worry about whether an institution which takes money for a certain objective can then use it for political purposes. There was great debate about that.”

Still, it’s difficult to say to what extent divestment would have hurt the College’s endowment. “That figure would be very significant,” Oakley said. “I’m not sure it was ever figured out because it was changing over time… Students questioned how much impact [divestment] would have, but I don’t think there’s any agreement on that.”

As the anti-apartheid movement gained traction on campus, students formed the Student-Faculty Advisory Committee on Shareholder Responsibility (ACSR)  and the Williams Anti-Apartheid Coalition (WAAC).  ACSR worked to assess the College’s investment policies and ensure that they met moral standards. Meanwhile, WAAC organized rallies and teach-ins, hosted speakers, staged protests, and held vigils with the goal of educating students on South African apartheid and pressuring the College to divest completely.

In response to student protests, John Chandler, then-president of the College, released a statement from the Board of Trustees on Aug. 10, 1978 announcing that the College would not divest. It read, “The preeminent purpose of Williams is to serve the educational needs of current and future students. Promotion of this social good must take priority over all other purposes.” The statement went on to note that “Williams’ capacity to remain in the forefront of liberal arts colleges depends upon adequate financial resources to meet such basic needs as faculty compensation, student financial aid, library books and journals, and scientific research… The Trustees have a legal and moral obligation to manage the College’s assets so as to meet the needs of present and future generations of faculty and students.”

Student activists portrayed divestment as an issue directly related to the moral character of the College, and maintained that complete divestment was their ultimate and non-negotiable goal. WAAC and other supporters of divestment believed that Williams could make an impact on the system by changing its investments. Still, administrators maintained that the College had to consider the practicality of its investments. Divesting entirely could mean dropping investments in profitable companies with marginal activities in South Africa.

“It’s a more complicated question than it might seem. It’s complicated morally as well as financially,” Oakley said. “But, you know, people are impassioned. They sometimes don’t seem to realize there’s another point of view.”

Throughout the late ’70s, student protests showed no sign of slowing down. According to Record articles throughout these years, in 1978, 250 students gathered in front of Chapin Hall to protest the College’s investments in companies with interests in South Africa. In 1979, 40 students demonstrated during a meeting of the trustees. Students protested an IBM recruiting meeting in Dodd House for its involvement in South Africa, particularly for its supply of computers, which facilitated the passbook system. The passbook was a personal file that allowed the government to monitor its citizens.

But demonstrations came to a head most dramatically in 1983. According to the Record, on Jan. 21, 1983, the Board of Trustees was set to meet with 10 WAAC representatives. However, all 150 students who were participating in a WAAC rally outside crowded into the small meeting room in Hopkins Hall.

The students then presented their demands: first, divestment from corporations refusing to sign the Sullivan Principles, a corporate code of conduct that required signatories to implement non-segregationist and equal employment practices; second, withdrawal of short-term deposits from banks that extend loans to South Africa; third, a restructuring of the ACSR so that students and faculty were directly elected; and fourth, a public meeting between WAAC and the trustees. Students also demanded that the College divest from 15 companies cited by WACC for non-compliance with the Sullivan Principles.

According to an issue of the Record published on Jan. 25, 1983, then-Chairman of the Finance Committee, Charles Mott “said these demands required further study and declined to respond.” Students then immediately announced the commencement of a hunger strike.

Members of the administration decried the tactic of hunger-striking as unethical. “It’s a coercive tactic,” Oakley said. “It’s coercing compassion in the sense that the administration of a college or university has responsibilities for the students’ well being. When students undertake something like a hunger strike, they may not fully be aware of the dangers.”

Two days later, in the middle of the strike, the Board of Trustees announced that it would not sell off $6 million in stock in companies with South African operations as the demonstrators had demanded.

On Jan. 26, 1983, WAAC members released a statement in response to the trustees’ lack of action. They noted that the $6 million they were seeking in divestment was only a fraction of a $140 million endowment. “There is, however, an even more critical point regarding the educational mission of Williams College,” the letter stated. “And that lies in the question of what kind of lesson is being taught to students (and others) when a highly respected institution invests money in companies which serve to buttress a racist and oppressive minority government. To put it mildly, the answer is a disquieting one.” Complete divestment, the letter stated, was the only way that the College could meaningfully enact change in South Africa.

Students involved in the strike justified it as the only way to truly capture the attention of the trustees and spur them to action. Levin said that students had little faith that the College would hear their demands. “We knew they weren’t going to read anything,” Levin said. “They had given no indication that they took us seriously.”

According to an issue of the Record from Feb. 1, 1983, the protesters ended the strike, “citing an apparent lack of Trustee willingness to act before the health of the hunger strikers would be endangered.” Though student demands were largely unmet, the activists still described it as a success.

“We implanted [the issue] in the consciousness of the whole student body and faculty,” Levin said. “I don’t want to overstate our contribution, but I do feel like we made our little contribution to ending apartheid.”

In the years following the strike, student activists continued to demonstrate. Just before parents weekend in 1986, “approximately 100 students helped construct four shanties [shacks]on Baxter Lawn to protest apartheid and to urge divestment by the College,” according to a Record article published on April 29. The shanties were erected due in part of “a feeling that the ACSR had become complacent because the school year [was] almost over.” They remained standing for eight days.

At the start of the following academic school year, members of WAAC placed 159 white crosses on Baxter Lawn (now Paresky Quad) to honor South Africans who died in the previous three and a half years while fighting apartheid. The crosses were frequently vandalized by other students. According to an Record article that November, members of WAAC  repainted the crosses black, green, and gold to demonstrate solidarity with Nelson Mandela and the African National Congress.

Eventually, rather than divest completely, the College agreed to follow the “divestment advocacy” policy of their pension manager, a company called TIAA CREF. Divestment advocacy, never prioritized complete divestment. Instead, it focused on encouraging companies to leave South Africa through proxy votes and other forms of outreach. Apartheid ended before the College ever made a commitment to complete divestment, and through the early ’90s, student acitvism slowly shifted towards other causes, such as racial justice within the College.

Though the College never fully divested from apartheid actors as the student body had envisioned, Levin said that the level of student engagement and intellectual involvement as a success on its own. “When you organize in a way that builds the beloved community — to use the language of the civil rights movement — it makes it more powerful and more effective,” he said. “We spent so much time together. It was a very social thing, as well as a political thing we were doing, and we took care of each other. And so it was very meaningful in that way.”