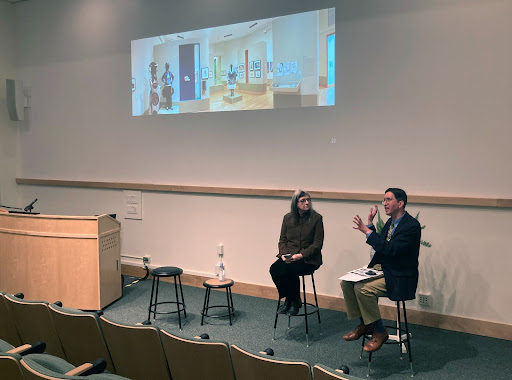 Professor of Comparative and Japanese Literature Christopher Bolton and Professor Emeritus at the Minneapolis College of Art and Design Frenchy Lunning discussed fandom and fashion’s role in culture and identity formation at a live-streamed talk titled Fashion, Subculture, and Cosplay on Feb. 10. Their discussion featured pieces from an exhibit at the Williams College Museum of Art curated by Bolton, Repro Japan: Technologies of Popular Visual Culture.

Bolton started the event by explaining how his Repro Japan art exhibit details the influence of technologies of reproduction on Japanese visual culture. “The show is particularly interested in comparing these different media with one another, to show the ways in which different technologies take up the same themes and then reproduce and then remediate each other,” Bolton said.

To demonstrate the link between cosplay and the themes of Repro Japan, Bolton showed a picture of a cosplay costume from the exhibit that was inspired by a plastic vinyl figure, which was inspired by an animé, which in turn was adapted from the manga Black Butler. “You can see each of these media remediate the one before it, repeating it but also transforming it,” he said. “We quickly lose the notion of origin.”

Lunning then explained the complex origin of cosplay, defining the practice as “the costume and performance of a popular culture character, regardless of location, time, or any other thing.” She described how cosplay emerged from the science fiction convention WorldCon, becoming a worldwide phenomenon. Cosplayers attend cosplay conventions dressed as various characters, most commonly from animé. “Millions around the world cosplay,” Lunning said.

Bolton and Lunning also discussed the difference between cosplay and subcultural fashion. They focused on “Lolita,” a Japanese subculture whose practitioners dress in childlike and highly feminine Victorian-era clothing. “If you dare to call [the Lolita] cosplayers, they go postal on you,” Lunning said. “This is a lifestyle. They’re not emulating a character, they are understanding femininity in a very distinct way.”

Bolton presented a picture of a Lolita dress from the exhibit, which combines a Victorian-style skirt with a kimono silhouette top and a corset. “It is very much a punk reference as well,” Lunning said. “It’s a relationship between East and West that is being ‘punked.’”

Bolton explained how the dress, whose skirt is made of a woodblock print design repeated elsewhere in Repro Japan, is placed within the exhibit. “Part of the philosophy of the show was to place these very different media in a very complicated physical network with one another,” he said.

The gallery designer, Professor of Theatre David Gürçay-Morris ’96, created gaps in the walls so that new objects are revealed as visitors move throughout the exhibit. “I think of it as a camera aperture, where you’re able to spy or frame or peek,” Bolton said.

Bolton then connected the exhibit’s focus on interpretation to the interpretive work that cosplay photographers do. “There’s no cosplay without a recording, without a remediation of the costume,” he said. Bolton explained the importance of posing for photographs to the cosplay community. “It’s a very performed sociality that is very fulfilling for the people practicing.”

Finally, Bolton discussed the parallels between contemporary cosplay fashion and other pieces in the exhibit, such as woodblock prints. “There are many currents that join and separate as we trace these different media, and especially the media’s interaction with one another,” he said.

Lunning ended the discussion by describing her admiration for the exhibit. “It’s a massive big whirl of stuff, and yet you can draw strings from one to the next to the other,” she said. “They are constellated around the community, and the community is what holds it all together.”