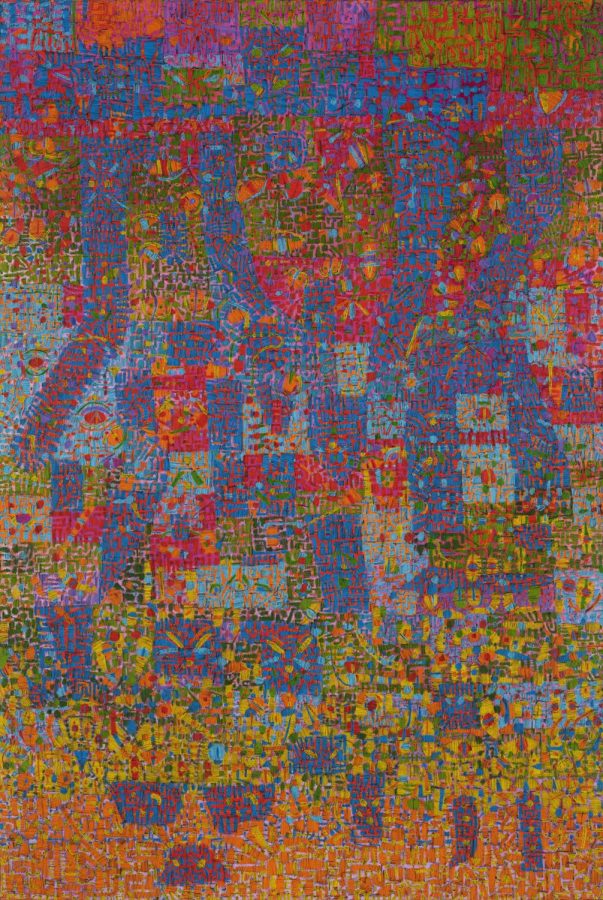 I stood in the Clark Art Institute’s Manton Reading Room watching Associate Curator of Contemporary Projects Robert Weisenberger and artist Tomm El-Saieh install El Saieh’s two paintings, “Vilaj Imajinè” (2021) and “Wanga Nègès” (2021). This portion of the installation process was to figure out how much space between the paintings was needed. Weisenberg noted that he wanted the pieces to be close enough, so that they were in conversation with each other, while also being far enough apart, so that they could be viewed as separate pieces. After thirty minutes of minute adjustment, 2.6 feet was set as the final width of the gap. The effect is entrancing.

Staring at “Vilaj Imajinè” and “Wanga Nègès” for the first time, the two paintings looked like windows into mystical worlds. Although the abstract nature of the work made it difficult to parse out whether I was looking at a jungle or a city, I could feel the scenes were brimming with life either way. These two works are half of the year-long installation Tomm El-Saieh: Imaginary City exhibit running at the Clark through Jan 2, 2023.

El-Saieh, born in Port-au-Prince, Haiti, is known for creating dazzling abstract paintings teeming with dense and dynamic markings. When I spoke to him in January, El-Saieh said his work derives its characteristic energetic quality from his unique “layering technique,” achieved by simultaneously adding and removing pigment. As a result, his layers of paint require a close viewing of his pieces. “Vilaj Imajinè” (2021), for example, appears to depict geometric blocks of pseudo-mosaic from afar. Upon closer inspection, however, a colorful urban plan-esque grid pattern emerges, overlaid with color-blocked eyes and beetles.

The exhibition derives its title, Imaginary City, from this piece, which according to the Clark’s press release has a dual meaning. First, Imaginary City directly refers to a traditional Haitian painting genre depicting colorful cityscapes. Second, the title references the artist’s complex relationship to his birthplace. El-Saieh has not been able to return to Haiti in recent years due to political instability, so his renderings of Port-au-Prince have opened a space for his memories to commingle with his hopes for the city’s future — thus crafting an imaginary city.

El-Saieh’s paintings offer a multi-sensory experience. “Wanga Nègès” (2021) captures the experience of watching a hummingbird in flight. El-Saieh masterfully uses rhythmic brushwork and contrasting colors to create a restrained chaos on the canvas, which I found to be a beautiful way of visually capturing a hummingbird’s buzzing sound.

The other pair of paintings, “Kafou” (2021) and “Canapé Verte” (2021), are on view in the Clark’s lower level. “Kafou” (2021) is a grisaille (a monochrome gray painting) in which El-Saieh varies the amount of pigment on his brush and pressure with which the color is applied. The effect of this technique is mesmerizing. The erased portions become blurred and recede into the canvas while the darker tones push forward. Over time, “Kafou” proved difficult for my eyes to register. The lighter portions of the image began to sway as my eyes fell prey to the optical illusion induced by El-Saieh and struggled to comprehend I was looking at a 2D image.

“Canapé Verte” (2021) also started as grisaille before El-Saieh added a layer of teal, green, blue, magenta, and purple. The painting’s title refers to the district in Port-au-Prince where the artist was born and echoes back to the themes of city, place, and belonging that unite the show.

I found myself continually returning to view El Saieh’s work over the course of writing my piece. Sometimes I would interpret the work as  sprawling urban plans and other times microscopic views of biological specimens. This kind of viewing experience is encouraged by the exhibition’s curator Robert Wiesenberger, who emphasized the depth and detail in El-Saieh’s work. “All of the tiny marks … and the vibrant colors he uses to push and pull his compositions, add up to a mesmerizing whole,” he said. “There’s a lot to look at in these paintings and I hope visitors to the Clark will enjoy spending time with them over the next year.”

In collaboration with the Clark show, El-Saieh will also be curating a show at the Williams College Museum of Art (WCMA) in the spring. “These linked exhibitions will show both sides of Tomm’s practice, as both an artist and a curator,” Wiesenberger said. Although the show is yet to be announced publicly, Lisa Dorin, Curator of Contemporary Art at WCMA, told the Record that the exhibition will contain ten paintings from Haitian artist Frantz Zéphirin and will be open from late April to December 2022.

Tomm El-Saieh’s abstract and colorful work breathes vivacity into the Clark’s interior public spaces. He brings to the Clark a new visual lexicon and cultural background, not represented in the Clark’s permanent collection. I can’t wait to revisit these four pieces over the next year and to see how his show at WCMA provides a fuller picture of his practice.