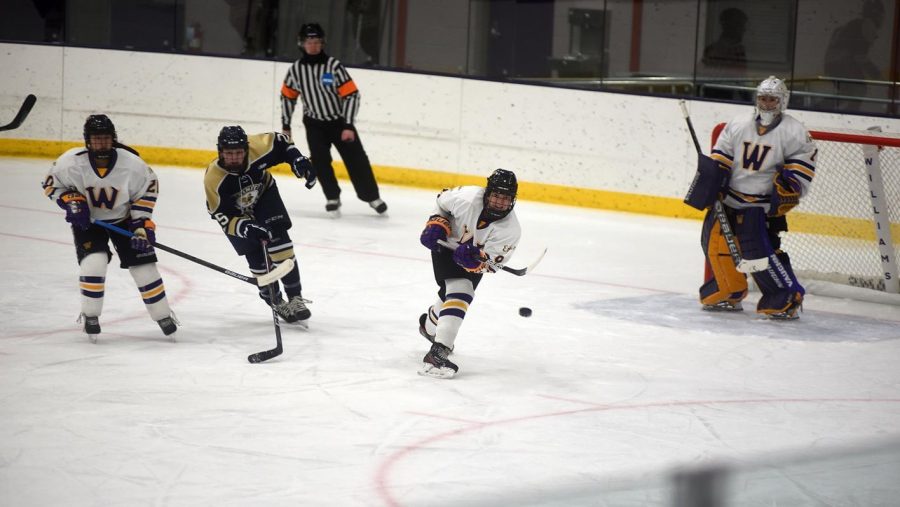 Women’s ice hockey (11–7, 8–6 in the NESCAC) beat the Wesleyan Cardinals in a close 3-1 match on Saturday in the second of two weekend matchups at the Cardinals’ home rink. The win was powered by a goal scored by Maddie Tix ’23 in the first period, a shorthanded second-period goal from Avery Dunn ’21.5, and a third-period empty-netter from Ellia Chiang ’25.

Coming off of a tight contest on Friday, both teams struggled to find their groove in the first quarter, with neither team making any risky attempts. The tone started to change when Wesleyan’s Chiara Christie was sent to the box for high-sticking. Twenty seconds into the power play, Tix took a shot at goalie Rei Halloran. Four Williams skaters scrambled to the net, capitalizing on the rebound. Tix found her own rebound and sent it home, giv ing Williams an early 1-0 lead at 8:16.

While Wesleyan had one more player on the ice than Williams, Dunn received a pass at the blue line and broke away from her defender. She skated down the right side and ripped a shot into the bottom left corner for a short-handed goal at 11:43, doubling the lead.

Eph women’s ice hockey head coach Meghan Gillis noted Dunn’s expertise on the ice. “Avery Dunn stepped up today and was the leader,” she said. “She had a monster game for us when we needed it the most.”

After a series of shots on Chloe Heiting ’22, the Cardinals swarmed the puck, forcing Heiting to drop to the ice to cover the shot. A penalty was called against Maddie Zack ’25, giving Wesleyan another chance at the five-on-four. With only 1:28 to go in the period, Mairead Ken- nedy organized at the point and passed to Christina Tournas at the top of the right circle, who sent it through traffic and into the net, putting the Cardinals on the scoreboard at 2-1.

Early in the third period, Heiting locked up the net again. The Cardinals’ offense fired a shot through the chaos, but Heiting swiftly slid to the left post to deflect the shot. When Tournas recovered the puck and navigated through traffic to get to the net, Heiting sprawled to the ice to cover the puck up.

The Cardinals pulled Halloran with three minutes to go, but Heiting was up to the task, handling the pressure well and remaining calm when shots were fired her way. “Chloe stood on her head and made two amazing saves there to preserve the win,” Gillis said.

Racing to the Cardinals’ empty net, Chiang worked her way to the slot and received a pass from Christina Halloran ’24 from the goal line to score at 19:32, securing the Ephs’ 3-1 win.

Williams and Wesleyan mirrored each other’s stats, with the Ephs tallying 29 shots on goal and the Cardinals recording 31. Heiting’s impressive goaltending helped to give Williams the victory, stopping 30 shots.

The Ephs will return to action when they host Middlebury on Friday.