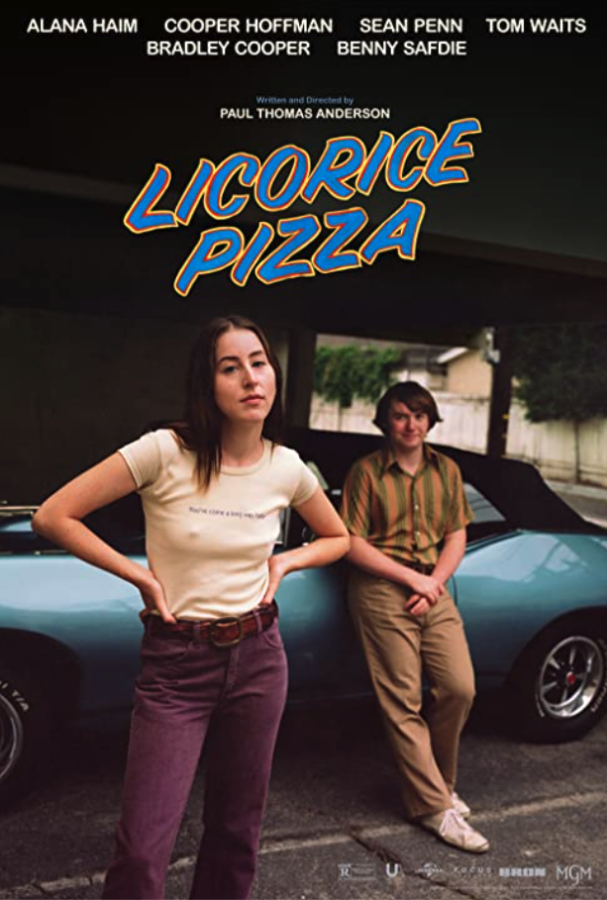 Alana Haim stars in Licorice Pizza, which plays at Images until Feb. 17. (Photo courtesy of Imdb.)

Remember me? It’s your little old grandma — maybe you’ve forgotten me now that you’re a big time movie star. I was walking down Spring Street yesterday and boom: your face was on the Images Cinema billboard! I knew, of course, that you and your sisters were in a band — you’re performing in Madison Square Garden now, but it feels like yesterday when you girls got paid in matzo ball soup for that first ever gig at Canter’s Deli. But who knew you were into acting now?

The poster said your movie was directed by some guy named Paul Thomas Anderson. His name rings a bell. Oh, I figured it out — your mom taught his elementary school art class. That must be where he got his creativity. I think I saw his last movie, the one about the tailor that won Daniel Day Lewis all those awards (what a hunk, right?). And I definitely saw that film he made back in the ’90s about the teen pornstar with the huge you-know-what. Yup, Paul sure is creative. I read on the Google that Licorice Pizza was supposed to be more autobiographical, though, based on when Anderson was a kiddo in the 1970s in the San Fernando Valley.

Boy, did all those shots of sunny Los Angeles make me miss the warm weather. Licorice Pizza was so sun-soaked I almost forgot that the temperature was in the negatives this week. I was just dazzled by all the warm yellows and pink hazy skies. Maybe it’s just because I remember them so well from when I was bouncing around during the ’70s, but I also loved all the wood-paneled rooms and patterned blouses and neon signs and swoopy haircuts. And your dresses and kneesocks and crop tops! So sweet, Alana — you should go for the vintage look more often!

Yes, Licorice Pizza was a feast for the eyeballs, as they say. But as for the plot — or, should I say, lack of plot — I’m not sure this old grandma totally got what was going on. It was obvious from the beginning that that Gary kid — you know, the child actor who was bugging you when he met you on school picture day — had a huge crush on you. Well, he was just adorable — what a winning smile! And so entrepreneurial for a boy still covered in baby fat; how many small businesses did he run in the movie, three? I couldn’t take my eyes off of him. When I looked him up later on the IMDb, I found out his real name is Cooper Hoffman. He’s the son of Phillip Seymour Hoffman, and this is his first movie role. I hope he has a big career ahead — what chutzpah!

Charismatic types make great salesmen, and Gary’s no exception: he peddles his waterbeds to everyone from the girl next door to big shot film producer Jon Peters. Bradley Cooper was hilarious as Peters, but I didn’t really think the scene was necessary. Actually, a lot of scenes weren’t necessary. For example, the movie could have done without all the jokes at the expense of Japanese women — I know it was realistic for certain people in the 1970s to make racist comments, but the jokes just weren’t funny. And I didn’t really care for the part where Sean Penn tried to drive you on a motorcycle over a fiery ramp. It makes your grandma nervous to see you involved in stunts like that, especially stunts that come out of nowhere.

Don’t get me wrong — this grandma might be old, but she’s not traditional. I don’t think every movie needs a driving plot, but Licorice Pizza often went freewheeling off in uninteresting directions (though speaking of “driving plot” and “freewheeling,” the part where you drove that huge truck on zero gas was definitely anxiety-inducing). You and Hoffman are both so watchable, and Anderson could have spent more screen time developing your interior lives instead of getting you into low-stakes hijinks as a way to make gratuitous homages to Hollywood figures past. Especially because — oy gevalt — you could have used that time to work out your budding feelings for each other in light of your ten-year age gap.

As I said before, charismatic types make great salesmen — the very charismatic can even convince you that they’re older than fifteen. Alana, we both know that a boy becomes a man at thirteen in the Jewish faith (though I don’t think Gary was Bar Mitzvah-ed). However, a boy should not become a romantic interest at thirteen or even fifteen if you’re twenty five. Sure, Gary has a charming smile, and sure, he orders drinks like an adult, and sure, by the way he gazes at you — especially in that lovely scene where you two are napping on one of his waterbeds —  he clearly adores you. Who wouldn’t feel flattered, and maybe even a little wooed? Licorice Pizza could have developed this central dynamic — the discomfort of navigating a soul-connection across an uncomfortable age gap — into something greater than a rom-com obstacle, but doing so would require Anderson to let go of the childish fantasy that Gary really could (or should) be involved with you. The movie ends with a movie-magic kiss — maybe this moment, literally shared under a cinema marquee, is meant to comment on unrealistic fantasies we inherit from the film industry. But that’s generous — on the surface level, Licorice Pizza’s resolution succumbs to Gary’s desire and Anderson’s gaze, and strips you of the agency you had to refuse, grapple with, or ponder his advances.

Anyway, that’s just one grandma’s opinion. And you know me — I have an opinion about anything. But really, Alana, you and your friend Gary are delights to watch on screen, and it’s too bad the movie couldn’t shake itself loose from its director’s nostalgic grip to become something greater. Don’t get me wrong, I didn’t regret buying a ticket — first love, blue jeans, and sunny afternoons were worth the price of admission.