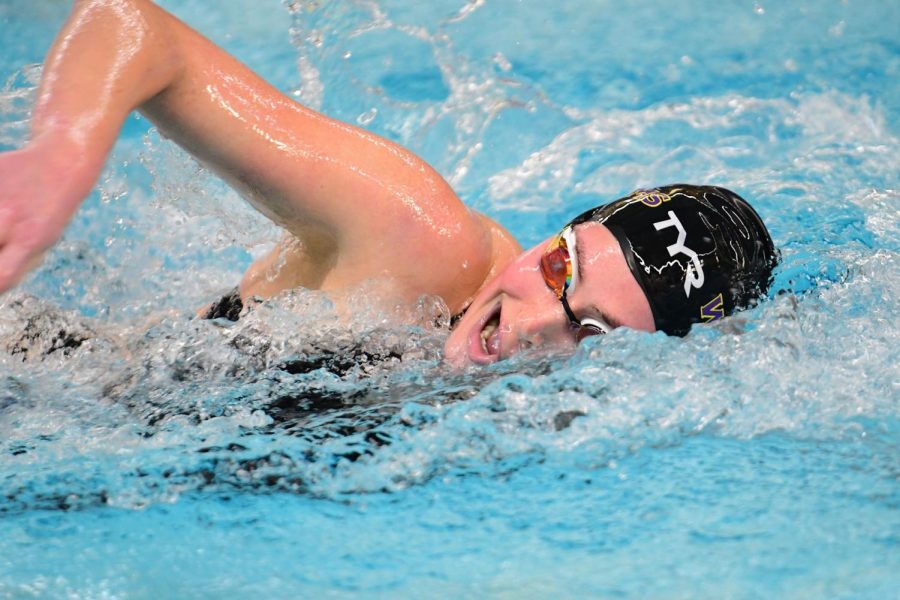 Georgia Panitz ʼ22.5, a senior on the team, clinches first in the 200 IM during the senior recognition meet.

Womenʼs swimming and diving (6–0, 2–0 in the NESCAC) beat Hamilton 192-97 and Middlebury 179-110 on Saturday in its last dual meet of the year to mark yet another undefeated season. Williams won fifteen of the sixteen events that day. The team, which has not lost a Div. III dual meet since 2008, increased its Div. III dual meet win streak to 117.

The meet began with a ceremony to honor the teamʼs seven seniors: Courtney Brown ʼ22, Molly Craig ʼ21.5, Casey DeLano ʼ21.5, Emily Lock ʼ22, Abby Matheny ʼ22, Georgia Panitz ʼ22.5, and Kerryann Reynolds ʼ22. The group has contributed significantly to the success of the team in and out of the water over the past several years.

Saturdayʼs lineup featured sprint-focused events with strokes of 50 meters instead of 200. The meet began with the 200 medley relay. The team, which consisted of Sophia Verkleeren ʼ25, Amanda Wager ʼ23.5, Samantha Kilcoyne ʼ23.5, and Lock started the Ephs off on the right foot with a well-executed win.

Emma Schulman ʼ24 made her collegiate debut in the 1000 freestyle and Schulman maintained her consistent pace to steadily pull ahead and finish first in 10:46.97. The freestyle events continued with the 200, in which Lillian Bushway ʼ24 and Wager took the top two spots, finishing in 1:55.74 and 1:57.49, respectively.

The 50s of stroke commenced with backstroke where Verkleeren and Bainon Hart ʼ24 showcased their sprinting abilities and earned first and second. In the 50 breaststroke, specialist Wager pulled ahead of the field, finishing in 30.70.

Despite an extremely quick turnaround between events, Verkleeren showed up again in the 100 butterfly to take her second individual win of the day with a 58.75. Kilcoyne led the field in the 50 freestyle with a 24.70.

In diving, Adelaide Herman ʼ25 was far ahead of her competitors. She finished first on both boards, scoring 227.78 on 1-meter and 278.85 on 3-meter. Herman wrapped up an incredibly impressive first regular season as an Eph, and she has set herself up well for the upcoming championship meets.

The team travels to the Middlebury Invitational next weekend, Jan. 28–29, for a three-session timed finals meet.