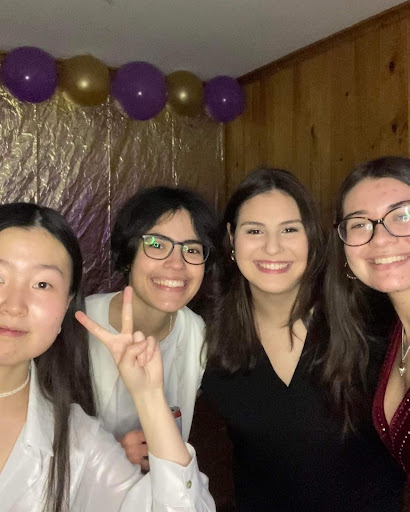 As students navigated a tricky return to campus for the first Winter Study since the pandemic hit, a group of 10 visiting students from Exeter College at Oxford University arrived on campus for the first time. Their trip, which lasted two weeks, from Jan. 3 to Jan. 14, is a part of the College’s partnership with Exeter, the lesser-known sister to the Williams-Exeter Programme at Oxford (WEPO).

The College began welcoming Exeter students to campus during Winter Study in 2017 with the hopes of sharing the Williams experience, according to Director of International Education and Study Away Christina Stoiciu. Despite difficulties that arose due to the College’s COVID restrictions in reviving the program this year, Stoiciu and five WEPO alumni who served as “buddies” to the Exeter students worked hard to make the trip memorable.

“We did our best to try to give them a glimpse into our campus culture and life in the Berkshires,” Stoiciu wrote in an email to the Record.

For some Exeter students, the opportunity to apply for a two-week trip to the College was not something they were aware of until the application was released in late October. “When I was applying to Exeter, it wasn’t something I was aware of, the link with Williams,” Freya Butler, a third-year at Oxford, said. “And actually, this program is kept quite quiet… Kind of like a hidden gem, I guess. A fully funded trip to the United States.”

Though the program is less well-known to Oxford students than WEPO is to Williams students, it is quite  competitive — especially this year, according to Butler. “I think it might have actually been because of COVID that lots of people applied [be]cause everyone just wants to leave the country and go somewhere new,” she said.

Though the cohort was only on campus for a short period of time, Coral Kim, a third-year at Oxford, said that by the end of the trip, she had already begun to form a connection with the College. “One of my fears was that I wouldn’t be able to connect or anything because [the trip was] so short,” she said. “By the end of the program, I felt like I was connecting to the place, getting to know a few people, really feeling a bit attached to it.”

Unlike Butler, Kim said that she knew about the connection to the College before she enrolled at Exeter — partly because three years ago, she had considered attending Williams. As a result, she approached her time on campus with expectations informed by her prior knowledge. “I did, at some point, three years ago, think about, ‘Oh, what will I write in my Why Williams essay?’ and all that,” Kim said. “So I kind of knew how it would differ a bit from the usual American college experience that you see in movies, like the fact that it’s quite rural, [and] the liberal arts thing. Williamstown in general is quite a special place.”

Though somewhat surprised by the small size of the College, Butler also expressed a similar appreciation for the chance to experience a small-town charm so different from the city environment of Oxford. “It was quite shocking that there was not even a grocery store in the town, and also, everywhere closing at two and three in the afternoon was also quite different to what I [am] used to,” she said. “But it was also kind of refreshing because I liked how there was so much space. Everything was so neat and clean. I think in Oxford, we’re just very cramped, and everything’s all dirty and not well-maintained.”

“I quite liked [Williamstown] because I think going to [visit] a bigger university [in the United States] would’ve been quite similar to Oxford, probably,” Butler added.

Stoiciu and the students assigned as buddies prepared many events and excursions for the Exeter students — including the traditional visit to MASS MoCa, sunrise hike up Pine Cobble, outdoor pizza party, and shopping spree at Walmart. However, the group was still able to explore the College on their own terms, and Kim said that she was pleasantly surprised at just how much free time she had over the two weeks.

“[The trip] was so much more chill and flexible than I thought it would be, you know, with this being arranged by two colleges,” she said. “They planned events once every two days, and otherwise we were very much left to our own devices, which was not what I was expecting but also quite nice because I didn’t feel like I was just being paraded around… But I was able to actually go into all the little stores along Spring Street, walk to the Clark in my own free time, just actually study in the library and feel a bit like an actual Williams student.”