One in Two Thousand: Kedar Veeraswamy ’24 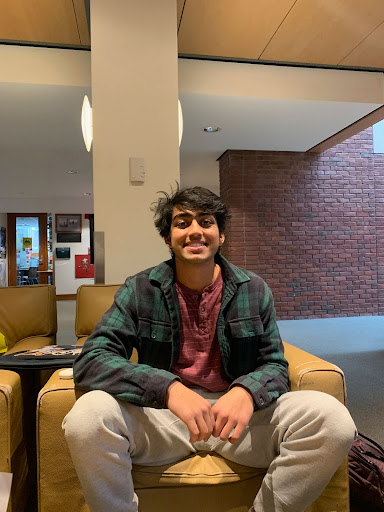 Each week, we randomly select a unix from a list of all current students at the College for our One in Two Thousand feature. As long as the owner of a selected unix is willing to be interviewed and is not a member of the Record board, that person becomes the subject of our interview. This week, the computer (using a script in R) chose Kedar Veeraswamy ’24, who discussed how he got to the College, The 1975, and his favorite Ben & Jerry’s ice cream flavor. This interview has been edited for length and clarity.

Kiara Royer (KR): So I know you’re from South Carolina — how did you end up at Williams?

Kedar Veeraswamy (KV): I went on the internet and looked up “best colleges in America,” and this was number one — so I visited and got in and decided to come here.

KV: I came here mainly for the people, the other students. It’s good to meet people that are like-minded — a good combination of smart [and] motivated but who can also have a good time.

KV: For a college, people here don’t party enough for my liking. I feel like there should be more parties. Also, people here are way smarter than I thought they would be. I definitely think of myself as the dumbest person at the school, which I guess I could’ve expected, but I didn’t. So that was kind of a brutal awakening.

KR: Has being on the baseball team helped with that?

KV: No, now I’m just the stupidest and the worst at baseball. [Laughs.] Baseball is good, though, and all the guys are super cool. Almost all of my best friends I met through the baseball team.

KR: Let’s talk about [the band] The 1975 because I know you’re a huge fan. When did you start to get into them?

KV: Ever since they put their first album out in 2013. I heard “Chocolate” and loved it. That was the song that my mom and I really liked, and from then, I started following them, and whenever they put something new out, I was a huge fan.

KR: Have you ever seen them live?

KV: No. Don’t even bring that up. It’s so sad. If you go on my YouTube, it’s all like “1975 Live in Paris,” “Live in London,” “Live here.” I was supposed to go [to a concert] last year, but then they canceled their entire tour for all of 2021. They haven’t announced anything else yet. I’m hoping when I go abroad in the fall — they’re British, so I’m hoping they’ll do a European tour when I’m over there.

KR: On the topic of music, you play guitar.

KR: Do you still play?

KV: Yes, but I’m not that good. Now, I’m transitioning to — well, “transitioning” — I’ve had one jam session with Greg [Remec ’24] where I sang instead. Can I plug our jam band? [Laughs.] We don’t even have a name yet. It’s just me, Greg, and Emilio [Anamos ’24]. We’ve had one jam session, and now, we might write something. I shouldn’t even be saying this. I should get a publicist before I go on the record with any of this. We just meet downstairs in a house on Hoxsey Street, and Greg plays the guitar, Emilio plays the drums, and I sing.

KR: That’s so cool. Have you sung in the past?

KV: This is my first time singing. I want to try and write songs. When you think of musicians you like, you like them for the art they’re making. I don’t just want to be a passive consumer. I want to reuse what I’m listening to or reading or whatever to make something. I think that’s the next logical step.

KR: Besides playing baseball and listening to music, I also hear that you like to ski.

KV: I love skiing, but I can’t right now because I’m hurt, which has been a real sore spot honestly because it’s Winter Study. My roommate, Kurt [Oelschlager ’24], and I would go probably every day if I wasn’t hurt, but I can’t go now. So I just sit around, or I do interviews, like this, with all the people that want to interview me. [Laughs.] My dad took me skiing when I was young, so ever since then, it’s been our family trip in the winter. Now, I’m mainly excited to see my family over winter break, but when I was younger, I looked forward to that week of skiing every year so much.

KV: Is this going to be about ice cream?

KR: That was a good segue, wasn’t it?

KV: Yeah, it was. I worked at Ben & Jerry’s over the summers in high school, and I loved it. But I was not a good employee, I gotta confess… If I knew anybody [that came in], I would give them free ice cream. I also ate a lot on the job, so I was really costing them double negative. They were paying me to deplete their inventory, which is not great for them business-wise, but they were chill. It was a good job.

KR: Do you have a favorite Ben & Jerry’s flavor?

KV: People don’t realize that it’s the best. Everyone loves to talk about Phish Food — for good reason, because Phish Food is number two — but I think that Strawberry Cheesecake is better, so I don’t want to hear about that.

KR: We need to have a Strawberry Cheesecake party sometime.

KV: This is how I know you have morals. If you just throw enough cookie dough at people, they’ll fall for anything. They don’t know the root of it.

KR: I also know that you’re an English major. Do you have a favorite book?

KV: The Scarlet Letter was pretty bad. Everyone thinks that just because something is old and uses a lot of big words that it’s good, but that book is really boring, and I don’t think a good book can be boring. No author sets out to write a book with the premise of boring someone, so if you do that, then I think that it’s ultimately just a failure. That’s why Catch-22 is the greatest book ever. It’s the perfect response to the ridiculousness of a World War — all of these things that we think make so much sense just don’t. It’s hilarious, and there’s something to be said for how smart you have to be to make the statement you need to make about the world…. It’s genius.