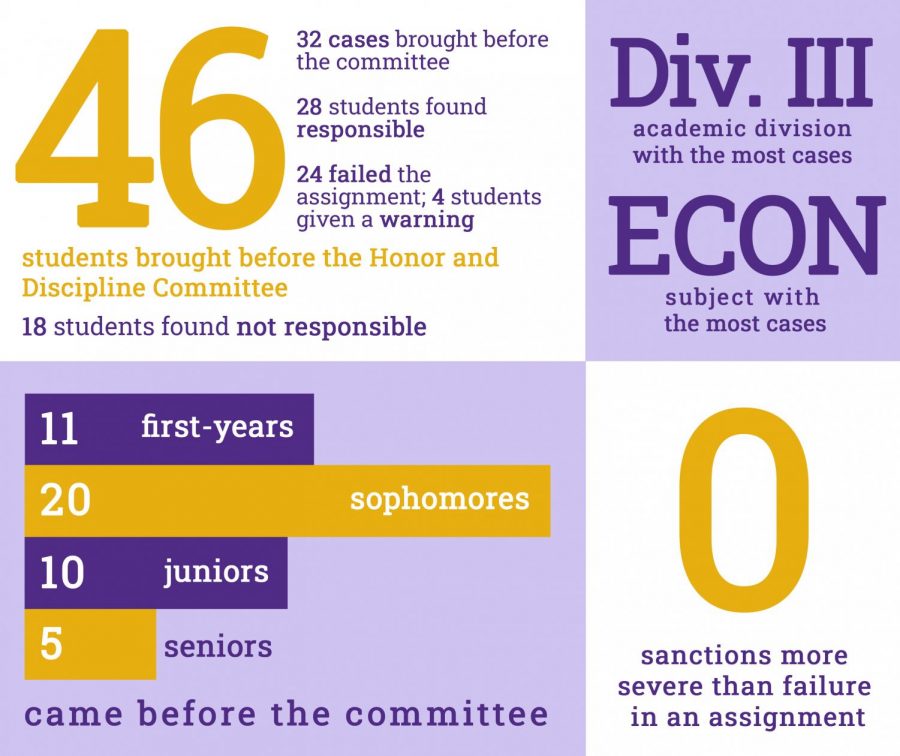 The Honor and Discipline Committee’s annual report reveals more lenient sanctions were given to students in violation of the College’s academic honor code during the 2020-21 academic year than in previous years. Published during the fall semester, the report summarizes the cases brought before representatives on the committee during the previous academic year. While the identities of students and faculty involved are kept confidential, the report can show trends in sanctions — including the increase in leniency — and how cases are distributed across departments.

During the 2020-21 year, the Honor Committee heard 32 cases involving 46 students in total, approximately one standard deviation above the average of 24 cases per year. Although 2020-21 saw a significant increase from the 15 cases heard in 2019-20, both are fairly typical in comparison with case numbers from the past decade.

Morgan Noonan ’22, the student chair of the committee for the past two years, says the increase in cases can be attributed in part to the pandemic. “Not only were students under the stress of attending school during a global pandemic, but remote learning posed its own challenges on academic integrity,” she said. “Temptations for dishonesty were high, and social connection and communication with peers and professors was low, which I believe culminated in the large increase in cases.”

Senior Lecturer of Psychology Susan Engel, the current faculty chair of the committee, noted in an email to the Record that there were also years with similarly high case rates before the pandemic. While Engel was not involved with the committee during the 2020-21 academic year, reports from the past 10 years confirm that certain years see more cases, with no obvious pattern. In 2017-18, for example, the committee also heard 32 cases but it heard only 18 the year before. This indicates that the increase in cases can’t necessarily be chalked up to the switch to online learning during the pandemic.

In a change from recent years, the subject most represented was economics, accounting for half of the 32 cases. Although the reports don’t always provide a subject breakdown, computer science is often the most-represented subject, presenting the most cases in both 2018-19 and 2019-20. Another change from previous years concerned the outcomes of students’ cases. Of the 46 individuals involved in honor cases last year, 28 individuals, or approximately 61 percent, were found responsible for violating the honor code. This is slightly lower than the rates from previous years: 2019-20 and 2018-19 stood at 68 percent and 73 percent, respectively.

Last academic year, in response to the pandemic, the committee issued no sanction stricter than failure in the assignment. The committee noted in the report, “Violations that would have typically resulted in a sanction of failure in the course resulted instead in failure in the assignment. Lesser violations were given warnings. Committee members recommended this lesser sanction because they felt that the extraordinary stress of the year warranted some leniency.” Noonan said that the committee will not defer to a “default sanction” this year, but will instead opt to determine appropriate sanctions on “a case-by-case basis.”

Assistant Professor of Computer Science Daniel Barowy, one of eight faculty representatives on the committee, said that he will continue to take pandemic-related stresses into account when deliberating on sanctions this year. “After serving on the committee, I have a better sense of the pressures that students feel,” Barowy said. “I now regularly and proactively encourage dialogue, so that I can identify students who are struggling earlier. My goal is to offer them better alternatives when they might be tempted to make poor decisions.”

In addition to the objective and statistical details of academic dishonesty at the College, the annual reports also provides anonymized summaries of the cases heard by the committee during the prior academic year. They provide insight into some of the ways that students become embroiled in — and defend themselves in — honor code cases.

In one case, a junior was brought before the committee when their professor noted that they had opened GLOW during a self-scheduled exam. The student claims to have clicked on a GLOW notification out of habit. Upon realizing it was a graded problem set, the student quickly shut off their phone. The committee found the student not responsible for violating the honor code.

In another case, a sophomore was brought in front of the committee after they told the professor that they missed a particular assignment because their computer was being fixed by OIT. The professor contacted OIT and found that the student had not communicated with OIT about a broken computer. The student was found responsible for dishonest communication.

Another junior was summoned before the committee when a professor noticed an inconsistency in their handwriting from one assignment to the next. To prove their innocence, the student brought handwriting samples to the committee to demonstrate their different fonts. The committee determined that the student was not responsible for violating the honor code.

“I believe the best ways to encourage academic integrity is through strong support networks for students,” Noonan said, “and I hope that being back on campus will allow students to connect better with their peers and professors.”