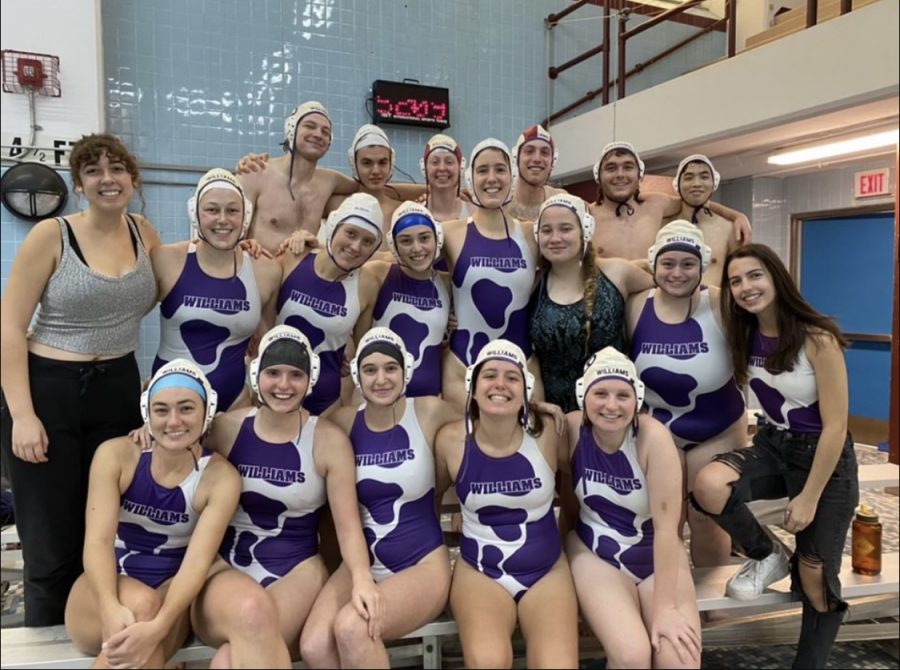 The club water polo team made the trek to UMass Amherst on Nov. 13 and 14 to compete in collegiate water polo’s Colonial Division Championship. After four games, the team finished first, beating Worcester Polytechnic Institute and UMass Amherst. As a mixed-gender team, members of water polo said the fact that the league was male-dominated made the win especially meaningful to them.

Going into the tournament, co-captain Galen Cassidy ’22 had a feeling the team would do well. “I’m an optimistic person and I knew what we were capable of, so I was hoping that we would come away with it,” he said. “And we did.”

Sophia Sonnenfeldt ’22, the other co-captain, emphasized the team’s growth over the last few years. “We used to be a very bad team,” she said. “My freshman year, there were about seven of us on the team. The minimum number of people you can have on a team is seven, so we were always running late and had to forfeit like half of our games.”

Now, the team has more than 20 members. “We also have a lot of people that have played before, who are great, and a lot of people that have never played before who are coming to practice a lot and learning,” Sonnenfeldt said. “Had I really thought about it, I would have guessed that we would have done as well as we did [at the tournament], but I really was just not in the mindset of thinking that because it hadn’t ever happened before.”

Cassidy and Sonnenfeldt both agreed that UMass Amherst was their biggest rival going into the tournament. The tournament was at UMass, and beating the home team is always significant. Also, beating them meant that Williams would win the division.

Cassidy said that everyone played a role in the team’s victory. “[Underclassmen] have brought so much energy and enthusiasm and excitement to this team,” he said. “None of us on team leadership could have possibly rallied this team by ourselves.”

“One of our frosh got a goal, which was just the most exciting moment,” Sonnenfeldt added. “It’s really fun to just see people kind of come into themselves and feel like they’re dedicating time at practice to this sport. Seeing them feel like it’s paying off is really rewarding, that’s the best part of it.”

The victory at the division championship held special significance, according to Sonnenfeldt. “This is a really big win for Title IX, which allows co-ed teams to play in men’s leagues,” Sonnenfeldt said. “We clearly had the highest percentage of non-male identifying players, and in what is technically still a men’s league, we won the league, which is pretty wild.”

Cassidy echoed this sentiment. He said he was proud to say that the team is 50 percent non-male identifying, more than any other team in the history of the division.

Sonnenfeldt has seen the team’s gender diversity evolve over time. “When I first joined the team, there was no non-male identifying leadership, and, while the team was open, welcoming, and so kind, it was still a very male-dominated culture,” she said. “That has changed a lot since 2018, and I think the really intentional ways in which we have changed it from a men’s team to a co-ed team have made tangible impacts.”

“A lot of the teams we play don’t have such inclusive cultures, and a few of our non-male identifying players have experienced some sexism and poor treatment from male players on other teams,” Sonnenfeldt continued. “These instances are hard, but the supportive team culture we intentionally reinforce, in my experience, always picks me right up and empowers me to keep playing. It also makes me even more grateful for the team culture we have centered around inclusivity.”

Katie Brockmeyer ’24, a female player, also expressed her appreciation for an inclusive team culture. “I have been very lucky to face [few] challenges, but I believe this has a lot to do with our team composition and how strongly our captains have fought to make the water polo team so welcoming,” she said. “I know from talking to players on other teams that this is unfortunately not the case at every college.”

With the help of the team, Brockmeyer said she has learned to push through adversity. “I do find that I doubt myself when I am subbed in, in place of one of our male-identifying players,” she said. “I’ve caught myself worrying that I’d bring the team down. But everyone on the team is very supportive, and it helps to ease that feeling.”

“We subbed in our non-male identifying players the most of any of the teams I saw, and we won,” she said. “It goes to show that it is sometimes about communication and collaboration rather than how strongly you can hold onto the ball.”

Cassidy said he felt immense gratitude after winning. “First of all, [I was grateful for] the number of people that had gotten up really early and driven an hour and a half for a 9:40 a.m. game,” he said. “The sheer number of people we had at this tournament compared to when I was a freshman made our win that much [more special]. We came together and did something great.”

Sonnenfeldt was especially grateful to have played alongside her teammates. “After we beat UMass, everybody was just kind of cooling down and celebrating a little bit,” she said. “I cried — I don’t really cry, but I cried. It was really meaningful to see a team that we have spent a lot of time cultivating and pouring our hearts into, to just be together in the moment.”