One in Two Thousand: Sam Schraver ’22 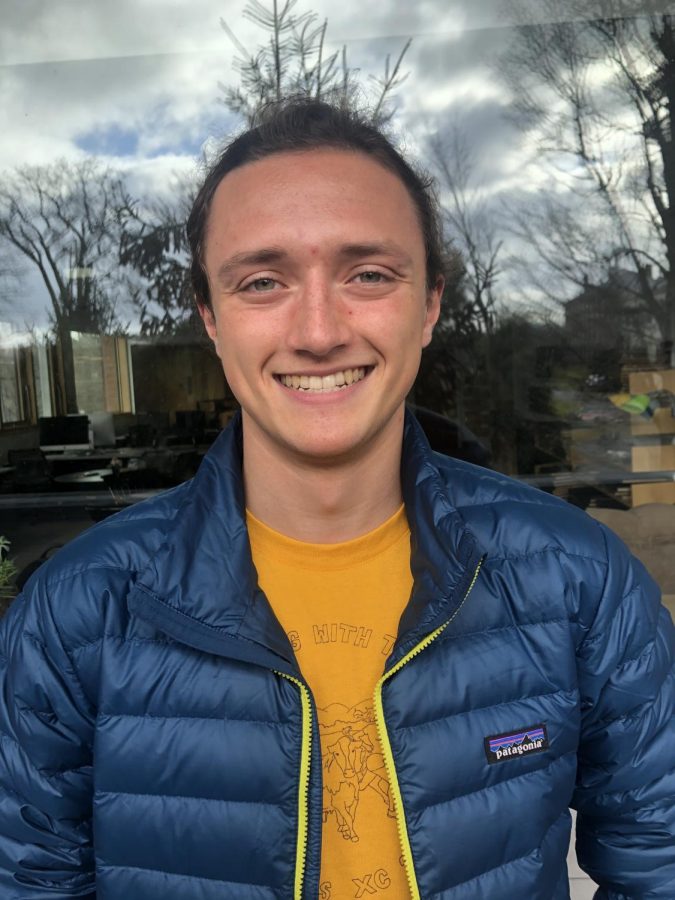 Each week, we randomly select a unix from a list of all current students at the College for our One in Two Thousand feature. As long as the owner of a selected unix is willing to be interviewed and is not a member of the  Record board, that person becomes the subject of our interview. This week, the computer (using a script in R) chose Sam Schraver ’22, who discussed his reign as the cross country team’s “King Slow Boy,” Puritan word-making, and books shaped like cubes. This interview has been edited for length and clarity.

Irene Loewenson (IL): Sam, I understand that you are the social captain of cross country and the normal captain of track and field.

Sam Schraver (SS): That’s right. I’m glad you brought that up. Yeah, I am what is known as “King Slow Boy” on the cross country team, which is a high-ranking position — you know, basically equivalent to a captain — someone who’s in charge of social coordination and also in charge of making sure that we don’t take ourselves too seriously.

IL: What does that entail?

SS: In terms of kinds of activities that I put on, obviously team parties and stuff. We do weekly hangouts on Tuesday nights just for whoever wants to come through, and various other events, like we have our team talent show every year and team murder mystery activity. So yeah, fun stuff like that. And also coordination of the Nationals trip, which is our big road trip to go cheer on our team down at Nationals, which this year was in Louisville, Ky.

IL: What was your talent at the talent show?

SS: This year, my act was that I put together a lot of Google reviews that I had found — many of this one restaurant called Sub King. You should check it out on Google reviews. It’s in Mechanicville, N.Y. The craziest stuff gets posted on Google reviews, because anybody can put stuff on there. And I found that the people who choose to do so are often, you know, quite the characters.

SS: So there’s this one guy — the guy’s username was “Buffchest Cuddletrousers.” It’s this short essay, really, about how he was just having this terrible day and had just got laid off from his job and stuff. And he went into Sub King, and apparently it was a life-changing experience for him. [Editor’s note: Cuddletrousers’ review reads, “I was completely enraptured by the delicious wings and french fries. When I arrived back home I returned with something I had never possessed before: an incentive to wake up and leave the house again the next morning.”]

IL: Have you ever been to Sub King?

SS: The reason I got looking at Sub King in the first place was that I went to Mechanicville to get vaccinated because I was eligible in New York — since I’m a New York resident — before I was in Massachusetts. And, well, a lot of the reviews aren’t actually that good. So I didn’t actually go, but if I do someday, I’ll put a Google review up there.

IL: A note to Record readers is that Sam and I got to know each other somewhat during the weird days of the 2020–2021 academic year, when we lived in adjoining pods in Prospect. Our pods got along pretty well and even had a masked pod mixer in the spring. My question is, was your pod keeping any secrets from our pod?

SS: I think our pod wasn’t keeping enough secrets from your pod. [Laughs.] Because for the majority of the year, our only interactions were really just seeing each other through the glass door that separated our common rooms. I know you guys would look over and see this one section of our very small alcove that we resided in and all manner of COVID-induced insanity happening there.

IL: Well, I actually reached out to some of your podmates to get some dirt on you. And they tell me that you ran a daily Instagram account faithfully for two years.

SS: This was actually the Instagram story on my regular Instagram account. But yeah, every day for two years I posted a fun fact on my Instagram story. It was a really fun project. I really enjoyed doing it, and other people enjoyed it as well. Some people would send in facts, and then I’d have guest facts on the story. Yeah, it was great. I’ve still got in my Instagram bio the link to the full list of facts, so it is still available in its entirety.

IL: Why did you fall off with your facts?

SS: The project had run its course. I had said to myself when I started it that I was going to stop when it started feeling like a chore — when it started being more effort than the joy I was getting out of it. So I took stock at one year, and I felt like I wanted to keep going, and I took stock again at 500 facts and thought that might be a good place to stop and then wanted to keep going at that point again. And then at two years, I was like, if I keep going to 1,000 facts, that’s almost three years, so I would have to be committing to another year. So I decided that two years was the right spot to call it.

IL: What were some of your favorite facts?

SS: Ooh, there were a lot of good ones. One of the great things is that I don’t remember all of them anymore, so I can scroll back through the list and find stuff that I’ve forgotten about. When people ask me what my favorite fact is — I don’t know if this is a definitive answer, but one that’s up there for me is certainly that the Puritans invented the word “rooster” so that they wouldn’t have to say “cock.” I don’t know if you could print that or not.

SS: That is changing gears somewhat. So, there’s the — what is it? Is it the Fermi Paradox? Yeah, that says that, statistically, there should be extraterrestrial life out there, but if there is, then why hasn’t there been any evidence of it yet? I think that the various speculative answers to that are fascinating. I think it would be a bit of hubris to say that we are the most intelligent life in the universe. So in whatever form that would take, I would say that there’s extraterrestrial life out there for sure.

IL: Well, I’ve also run into you working at the library sometimes. What are the most interesting aspects of your job?

SS: Definitely the weird books I find while working in Sawyer — which is great. It’s a very fun part of my job. For instance, on the second floor, if you go into the “N” category — that’s where a lot of the art books are — most of them are just these nice coffee-table books of pictures of artworks and sculptures and stuff. But there’s one that — I forget what it’s called — but it’s got a gold cover, and it’s basically a perfect cube. It’s crazy because it’s this short, squat book and it’s got tons of pages. It’s this extremely long thing. So I don’t really know what it is, and I haven’t looked at it too much, but it catches my eye every time I’m down there. Also, I think in the art section, there’s one called  Apes and Ape Lore, which I’m just fascinated with every time I see it.

IL: Have you ever opened it up?

SS: That’s a Winter Study project for me. I’m gonna check out some of these weird books. Oh, there’s a novel down in American fiction that caught my eye recently. I think the title was Another Bullshit Night in Suck City or something like that. If that’s not an eye catcher, I don’t know what it is.

SS: As with everybody, I’m sure, there’s plenty of stuff that I’ve said “Oh, yeah, I’m gonna do that over Winter Study, absolutely.” But one thing I’ve been thinking of recently is that I’d love to put together a short film or two — I think that’d be a really fun thing to do with other people and just a way to do a creative project while I’m at school during Winter Study. There are still some places in the area that I haven’t visited that I’d really like to before I graduate, like the Grafton Peace Pagoda over in Petersburg. And also every time I drive to school, I see signs in Petersburg for Berkshire Bird Paradise, which — what is that? I don’t know. But I think it needs to be explored before I graduate.

IL: Is there anything that I haven’t asked you about that you think the Williams community should know about you?

SS: Actually, I’m very impressed — you’ve done a very good job covering the bases. Like KSB [King Slow Boy], fact of the day, library stuff. Yeah. I would just say: Williams students, be nice to each other; be nice to yourselves.