Review: ‘How could I resist’ Cap & Bells’ Mamma Mia? 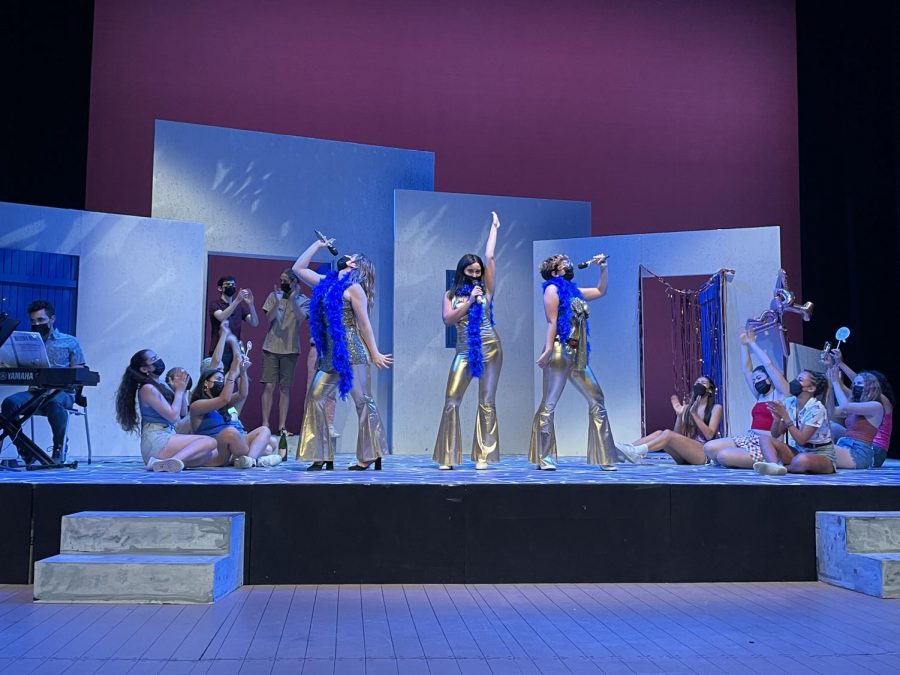 While the details of the plot would be brand new to me, I knew the broad strokes: three potential dads, a marriage, Meryl Streep, a lot of ABBA — you know, the important bits. What I’d soon find was a show that would leave me wanting to sing along to its songs as performed by my peers long after I left — but I guess I’ll settle for the Broadway recording.

Notably, as per the College and the ’62 Center’s COVID rules, not only the audience but also the performers were masked. The accomplishment of creating this performance masked goes to many: director Mati Rogers ’24, for working with only the top halves of the actors’ faces, and to each of the cast members, for the extra work of projecting their lines and songs through a protective barrier.

The first round of applause belongs to the pit orchestra and music directors Will McCormick ’23, Jesse Cohen-Greenberg ’24, and Joe LaRocca ’22. In their isle-appropriate Hawaiian shirts, they fit perfectly in the setting, and watching the characters occasionally interact with a musician brought them into the world of the show. Their lively musical accompaniment was fantastic, standing out in the overture and entr’acte. The work of the ensemble was another memorable aspect of the show, from charming partner work to dancing around in snorkels and flippers. They laughed and gasped right alongside the audience, dancing through the aisles and filling up each part of the theatre.

As someone who’d never seen Mamma Mia before, I must applaud the cast that made these characters come to life. As a proponent of stunning and talented women of color being romanced, I was immediately sold on Petra Hinds ’24 as the show’s Sophie. Her performance only got stronger as the show went on, and her delivery of “Under Attack,” with her clad in pajamas while being chased around the stage by a hilariously exaggerated version of her worst fears, was a stunning example of her powerful voice.

The set itself, primarily designed by Raven Zhan ’24, formed the life of the show; the white and blue of the taverna and the casual bar setup providing a dynamic exterior and solid base when changing between scenes. I particularly loved Donna’s vanity with the cut-out mirror, and the use of props in “Chiquitita,” a scene of bonding between friends enhanced by the fun they had draping feathered scarves over each other’s shoulders and putting hats on one another’s heads.

Crucial to the songs at the heart of the show, the work of sound designer Cameron Langsdale ’25 and tech team deserves commendation. Seeing a microphone appear from inside a trunk, behind a pillow, or handed to an actor from the pit quickly became an indicator to prepare for some music. As the show went on, the microphones emerged from increasingly stranger and more clever places. It was always a delight to see one song transition into the next, and the cast members sing their hearts out into those concert-style microphones.

As much as I loved watching the actors sing their hearts out into personal microphones, I wish that the sound design had included some overhead microphones to better hear the ensemble during large numbers. Hearing their voices more clearly when they were on stage would have enhanced the show further, as the ensemble’s backup from offstage showcased their voices and the songs’ harmonies.

My favorite song from the show has to be “SOS” — the movement, acting, and the vocal blend were all amazing, and left me yearning to  hear it sung again by the show’s Donna (Gigi Gamez ’22),and Sam (Chris Van Liew ’23). As probably one of the only people in the auditorium who didn’t know how the story would end, “SOS” undoubtedly convinced me that those two should be together by the end of the show.

My only criticism would be that Rosie (Sara Stebbins ’24) and Tanya (Miriam Harshberger ’22) should have dated each other instead of the men they each ended up with — you can’t tell me Tanya has divorced three men and isn’t in love with at least one of her also single best friends. Nonetheless, I still loved watching Rosie and Tanya’s dynamic on stage. Harshberger’s “Does Your Mother Know” was a high-energy number, and her transition from being lifted in the air to confidently belting left the audience in awe. I was also charmed by “Take a Chance on Me,” helped by the at least one-foot height difference between Stebbins and the show’s Bill (Edmond Laird-Raylor ’24). Sometimes seduction requires a chair to look the flirtee in the eyes, and that’s undeniably adorable.

After the final curtain, I wasn’t the only one humming “Dancing Queen” on the way out of the theatre. Putting together live theatre during a pandemic can’t have been easy, but it was a success: watching Cap & Bells’ Mamma Mia made for a great way to start the weekend. Full of laughter, energy, and fantastic performances, it was an amazing way to spend a chilly November night.