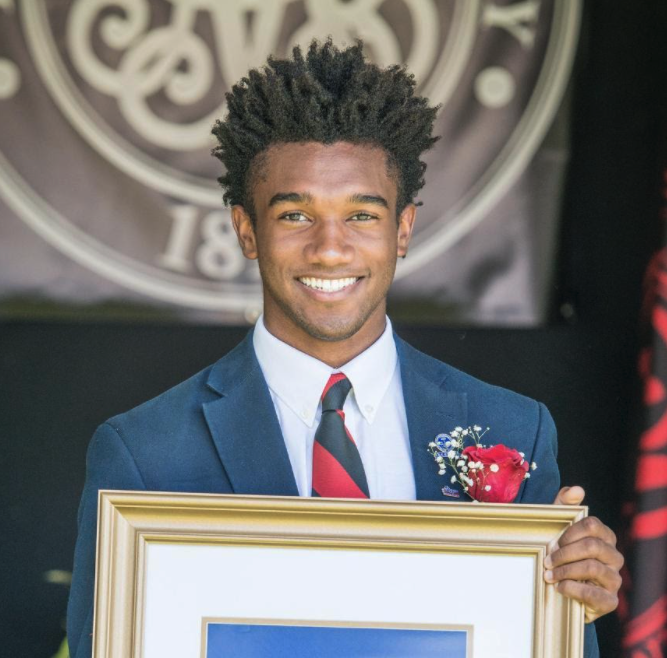 Editor’s note: The following is adapted from a eulogy written and delivered by Samuel Riley ’23 during a Nov. 14 on-campus memorial service for Ahmad Praileau ’24, who died in August.

This piece contains discussion of suicide.

Ahmad Ashanti Praileau came to Williams in the fall of 2020 from Schenectady, N.Y. Before arriving on campus, Ahmad had already amassed a laundry list of accomplishments. He was a standout in the classroom. And on the track. And in the martial arts dojo. At the easel, too.

In fact, a more accurate way to encapsulate Ahmad’s abilities is to simply say that he excelled at the highest level in whatever he put his mind to. Indeed, there is a reason his friends nicknamed him “Ahmad the God.”

And yet, he would never clue you in to his considerable abilities unless you happened to see him engaging in one of his various interest areas. Unlike most people I know (including myself) who will indulge in the vanity of the spotlight when given the chance, Ahmad never would. Despite this fact, I have never encountered an individual as profoundly talented, as deserving of a spotlight, and thus as humble, as Ahmad. As his teammate on the track and field team, I got the privilege of seeing firsthand his extraordinary physical talents on a daily basis. I also got to witness his unfaltering humility.

Indeed, the most uncomfortable I ever saw Ahmad was when he was named performer of the meet this past spring. Although he hadn’t competed since his junior year of high school, Ahmad toed the line against athletes up to four years his senior with numerous years of collegiate athletics under their belt. And he dominated.

But when recognized for his accomplishments that day, Ahmad immediately deflected attention to the teammates who supported him or performed well themselves that day. When presented the award, he accepted it with a sheepish grin and quickly returned to his spot in the crowd as echoes of “Ahmad the God” reverberated.

In preparation for that meet, Ahmad had spent eight months training day in and day out. Now, let me remind you: Those eight months were from September 2020 to April 2021, the height of the COVID-19 pandemic on campus and across the globe. While strenuous in a normal year, these training sessions took on a whole new level of intensity to accommodate the necessary pandemic precautions. There were lifting sessions outside in 30-degree weather. There were 1,500-meter runs in the rain with a mask. There were seemingly endless tempo workouts on the dreaded “Curve.” I think you get the picture. Having a net neutral attitude towards such a situation would already have been a remarkable feat. Hell, to just show up half the time would have been highly impressive.

Even still, Ahmad came to every practice. And never complained. And that is not hyperbole. That is simply who he was.

His first-year experience was flipped completely upside down by the pandemic. Still, he had the tenacity to show up every day and did it with that brilliant, bright smile on his face. If we were struggling during some heinous workout, just seeing his smiling face was often enough to lift our spirits.

As a uniquely empathetic individual, I think Ahmad knew the effect his joy had on others. I know there were days, as often happens at Williams, where he felt overwhelmed, tired, or isolated — and yet he continued to smile. And while I cannot say for certain — maybe because he really was the demigod we proclaimed him to be — I think he continued to be his bright self because he knew what that meant to us.

This would certainly be in keeping with his character. To his friends, Ahmad was known to have the uncanny ability to anticipate needs. He somehow knew when you were going through hardship and would check in with you, listen to you without judgment, and find a way to lighten your mood. To those he did not know, he was similarly gracious. He was known to help others at meets who did not have adequate coaching themselves. He once even gave his own spikes to a direct competitor, swapping back and forth as the high jump competition progressed, because he saw they lacked proper equipment. What made Ahmad special was his heart and, for those who had the privilege of interacting with him, his principle of putting others before himself — always.

Unbeknownst to myself and his closest friends, Ahmad struggled deeply with depression. Tragically, on August 3, 2021, Ahmad died by suicide.

The news of his death left me scrambling. How could this happen? What did I miss?

To be honest, I still have not found answers to those questions. However, what I have found, to some extent, is solace. Solace in my belief that the relationships Ahmad forged during his time at Williams — the love between him and his teammates, entrymates, and on-campus mentors — all helped him to grace this earth for as long as he did. And although for a time my lack of comprehension of Ahmad’s death tormented me, I came to understand that complete comprehension is impossible. This realization too has given me some solace. Knowing that I will never know has enabled me to move forward, to continue his humble, selfless legacy — to remember him.

But remembrance is not static. Like any muscle, memory requires continuous use and repetition. Each day, it is up to us to carry his torch, to champion the qualities that made him extraordinary, to radiate his brightness.