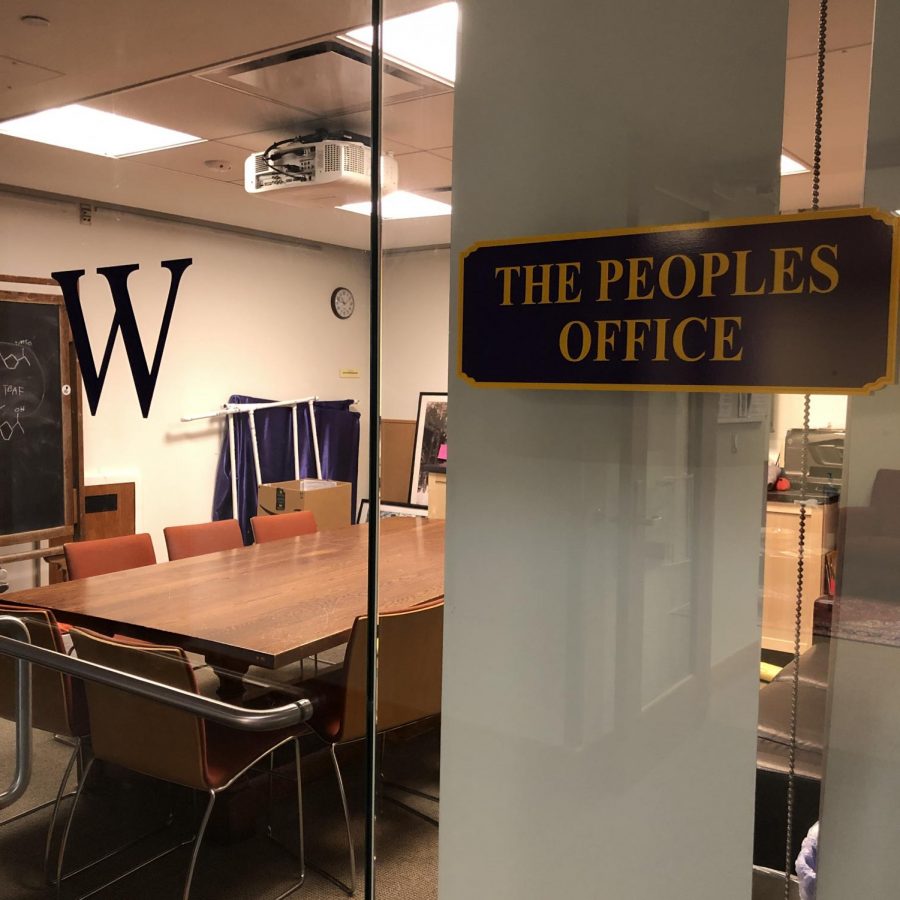 “The issue couldn’t be clearer: CC’s troubles are larger than any one person,” the College Council’s (CC) Executive Board wrote in a Record op-ed on Oct. 9, 2019. “They are rooted in its own rules and structure.”

Over two years later, the newly implemented Williams Student Union (WSU) aims to help students in the way that College Council itself said it struggled to do.

WSU, the advocacy branch of the “Three Pillars” student government that replaced CC in spring 2020, is currently undertaking “campus reclamation,” its largest project yet. The project’s goal is to alter the College physically in order to make members of the community more aware of its institutional histories, Class of 2024 Representative Gwyn Chilcoat ’24 said.

As a part of that project, WSU has spearheaded “Written in Stone,” an initiative in which they will choose quotes from the Mohican peoples, who originally occupied the land of the College, to be engraved onto the marble slabs in front of Sawyer Library in February 2022.

Since its formation, WSU has consisted of a maximum of three members from each of the four class years. Only seven of the 12 positions were filled last fall, however. In fact, Class of 2022 Representative Argenis Herrera ’22 was the sole upperclassman to run for a position. The number of filled positions increased to 10 this fall, after the Class of 2021 graduated and first-year students subsequently elected three new representatives to WSU.

The seven non-first-year representatives — with the exception of Class of 2024 Representative Jay Kim ’24 — had all previously served on the WSU. In addition, within those three class years, no more than 107 students voted.

The Class of 2025, in contrast, demonstrated more engagement with WSU elections.  Eight first-years ran for a seat, and 244 first-year students voted for a voter turnout rate of approximately 42 percent.

The low voter turnout for older class years is likely due, at least in part, to a lingering distrust of CC, Chilcoat said.

Before the students voted the abolish CC, it received backlash for hesitating to fund Black Previews — programming for Black students admitted to the Class of 2023 — and for its decision to refuse the Williams Initiative for Israel’s request for Registered Student Organization status, which led to an investigation by the Justice Department.

Class of 2023 Representative Emmanuelle Copeland ’23 said CC’s meetings were not productive or meaningful because of its hierarchical structure and limited representation.

She said cisgender, heterosexual white men dominated CC’s meetings, which were especially unrewarding for marginalized groups. “It was such a demeaning, harsh space in which no actual change could be made,” she said. “[CC] often misrepresented or misunderstood different issues and thus would mischaracterize the solutions.

The majority of the students on WSU, on the other hand, are of marginalized identities, according to Herrera. “Ever since [CC] has been abolished, we’ve done much better in terms of representation,” he said.

CC also drew criticism for its lack of transparency. “The CC was more often a body that would gatekeep funds and information from students,” Herrera said. “The WSU tries extremely hard to be the exact opposite. The last thing we want to do is gatekeep anything.”

It is for the best that the student body will move past the memory of CC naturally as new students enter the College, Herrera said.

A lack of knowledge about WSU, along with lingering distrust of student government, may be another factor in the low turnout rate of elections, Class of 2023 Representative Yunjin Park ’23 said. The WSU is a fairly new body of government, so many members of the student body may just not know precisely what the Three Pillars system is, she added.

Leilani Fuentes ’24 said she wished that WSU publicized itself more to increase awareness of the representatives’ projects amongthe student body. “I try to [keep up], but I just don’t know much about it,” she said.

This fall, WSU prioritized outreach to the Class of 2025, Herrera said. “It’s incredibly important for first-years to buy in from the get-go if we are to break the trend of apathy that is so prevalent in the upperclassmen years,” Herrera said. “I wish we had given more attention to upperclassmen. Unfortunately, we ran out of time before that could be done.”

Or perhaps the reason for the low turnout rate among upperclassmen is simply an absence of interest. “There’s just a lack of effort on the part of the student body,” Liz Girvan ’22.5 said. “Everyone is really concerned about national politics but doesn’t really care about the problem on a school level.”

Park said that WSU would ideally draw higher voter turnout from the entire student body in future elections. Every representative would prefer that more students voted, even if those students voted for candidates other than themselves, she said.

Reasons for and pitfalls of the lack of candidates

The lack of new students running could illustrate trust in the incumbent candidates, Herrera said. “If other sophomores see Gwyn’s name on there, they’re like, ‘The job is already done.’”

Many upperclass students have also already found their own niches in the school’s community, so they may not have adequate time to devote to another student organization, especially a new one, Park said.

However, Kim sees potential dangers posed by the current status quo. WSU’s structure is a “flat hierarchy,” unlike the CC’s, which means that no individual member distributes mandatory tasks to other members.

“If I didn’t want to attend any meetings or send any emails, I wouldn’t have to,” Kim said. “And because [WSU] provides its results as an organization, no one would know that I hadn’t done anything, and I could totally conceivably run next year.”

In addition to the possibility of reelecting apathetic candidates, having the same representatives run for multiple terms limits WSU’s ability to engage with the whole student body, Copeland said. “We need to work harder to make sure that different voices are included and that we don’t bubble ourselves into one opinion that we might share that other people don’t,” she said.

The challenge of representing the entire student body has been exacerbated for Herrera, who now has served as the sole representative of his class year for two semesters. “I am only one person, and I cannot take in all of the perspectives of students who have widely different experiences from me but are still a part of my class year,” he said.

If the same candidates continue to run, WSU will have to find other ways to ensure more voices are heard. “If we need to forfeit our seats, that’s how it’ll have to be,” Copeland said. By surrendering their positions on WSU, current representatives could encourage their peers to step up to represent their class year, she said.

Herrera said the best way for WSU to establish itself further is through successful projects. “The more that we get out, the more that we do, the more students will see us as a productive body and not as an elusive part of campus life,” Herrera said.

“Written in Stone” is one of the projects WSU hopes will bring it greater recognition, Herrera said. The final quotes that will be engraved onto the slabs have not yet been chosen, but they will be sourced from the Stockbridge-Munsee Historical Preservation Office and will center on the narratives of the Mohican peoples.

The Office of Institutional Diversity, Equity, and Inclusion will fund the project, and WSU is hoping to find an engraver from the Mohican community so that they can redistribute funds from the College to the community through the project.

Along with “Written in Stone,” individual members of WSU continue to spearhead their own “passion projects,” Park said. Different students, regardless of class year, set WSU’s agenda and ensure that everyone’s passion projects are on that agenda, Copeland said.

Class of 2025 Representative Bobby Verhey ’25, for example, is creating an initiative to increase bike rentals to students, and Henley hopes to persuade the College to recognize more non-Christian holidays officially.

“My hope is that as we have new generations of students, we will see an increased affinity for [WSU],” Chilcoat said.