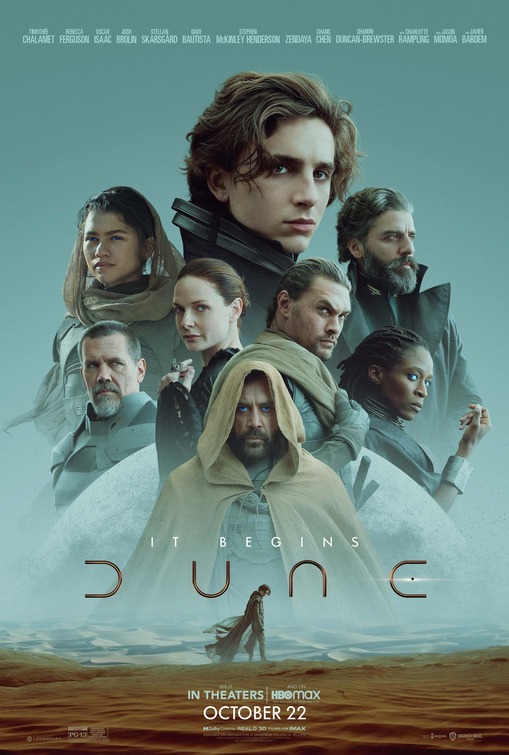 A thundering voice rumbles in an alien language: “Dreams are messages from the deep.” The audience suddenly faces a shot of an endless desert plane, the hazy sky the same shade as the sand beneath, lit only by a pale sunrise. The air glimmers with heat and glitters with melange. This opening line, coupled with the sweeping desert-scape, establishes the recurring themes and aesthetics of the long-awaited sci-fi thriller, Dune.

Brought to viewers by prolific director Denis Villeneuve (Arrival and Blade Runner 2049), Dune is the latest adaptation of Frank Herbert’s best-selling science fiction novel of the same name. Set about 20,000 years from now in a system of colonized planets, the story follows protagonist Paul Atreides (Timothée Chalamet) as his family’s noble house is given control over the planet Arrakis, the sole source of the most valued resource of this universe: melange, an addictive substance essential to space travel and boasting health-enhancing properties.

Paul joins his father, Duke Leto (Oscar Isaac), in overseeing the mining and refining of melange, liaising with the Fremen, a nomadic group native to Arrakis, and fighting the Harkonnens, a violent enemy house. The plot thickens with the possibility that Paul may be the long-awaited Kwisatz Haderach, a messianic figure possessing incredible mental powers, as foretold by the Bene Gesserit, an elite organization of women possessing psychic powers who secretly control the universe’s politics.

A fan of Dune since his teenage years, Villeneuve’s appreciation for the novel is evident. For example, most of the dialogue in the initial scenes quotes the book verbatim. The creative liberties Villeneuve did take removed some of the book’s more problematic elements to make the story more accessible to a more modern, progressive audience. For instance, the status of Paul’s mother, Lady Jessica (Rebecca Ferguson), as the Duke’s concubine is mostly ignored in the film, and the homophobic descriptions used by Herbert to indicate Baron Harkonnen’s villainy are swapped for his cunningness and love for violence.

From start to end, the film is gorgeous. The color palette of muted greys and sandy yellows is punctuated by the mesmerizing contrast between the film’s many orange sunsets and bright blue Fremen eyes. Set design, special effects, and camera angles work together to flesh out the macro-and micro-elements of Herbert’s worldbuilding. Set to an immersive soundtrack by Hans Zimmer, sweeping shots of the hostile planet, futuristic technology, and monstrous sand worms tackle the traditional sci-fi elements. Makeup and costume design ground the established societies and cultures of this universe. Still, don’t be deceived by the slow music and panoramic shots — the film is surprisingly fast-paced with the constant introduction of new players and places as well as entertaining action scenes interspersed throughout its 155-minute running time.

The director deserves commendation for taking on what some have deemed an “unadaptable” project, relaying Dune’s extensive worldbuilding without overwhelming the audience. (Older audience members may remember the infamous 1984 adaptation, whose negative reception led the film’s director to disown it.) Mindful of audience members’ varying familiarity with the source material, Villeneuve provided both expositions for novices and easter eggs for book fans. And yet the worldbuilding does feel incomplete. I would have loved more historical background to clear up any remaining confusion held by viewers completely new to the novel’s universe — perhaps by adapting Princess Irulan’s Galadriel-esque narrations from the beginning of each chapter in the book.

In juggling the large interconnected ensemble that is the Dune universe, the movie shies away from spending too much time with any one character. This prevents the development of meaningful character arcs and creates a sense of detachment between the audience and the characters — including the protagonist — even when they face fatal obstacles. Zendaya fans will be especially disappointed to find her character, so heavily present in the film’s marketing, to have minimal screen time limited mostly to visions and dreams. Despite many characters having very little screen time, however, each gets their shining, stand-out moment. One standout is Jason Momoa’s portrayal of Duncan Idaho, whose energetic action scenes and banterous dialogue provided relief from the slower, more serious tone of the rest of the film. In any case, I imagine there will be ample time in the sequel to dive deeper into individual characters now that worldbuilding will be out of the way.

Dune managed to keep me on the edge of my seat until the credits began rolling, leaving me eager for Dune: Part II, which expects a 2023 release. As a science fiction fan and avid bookworm, I am delighted that this film has revived an appreciation for the source novels in an entirely new generation of (potential) readers. For those new to this universe, I advise you to brush up on Dune lore and jargon before seeing the film — you won’t have the luxury of a back-of-the-book appendix in the theater!