Teaching associates and language fellows discuss experiences of teaching, studying at the College 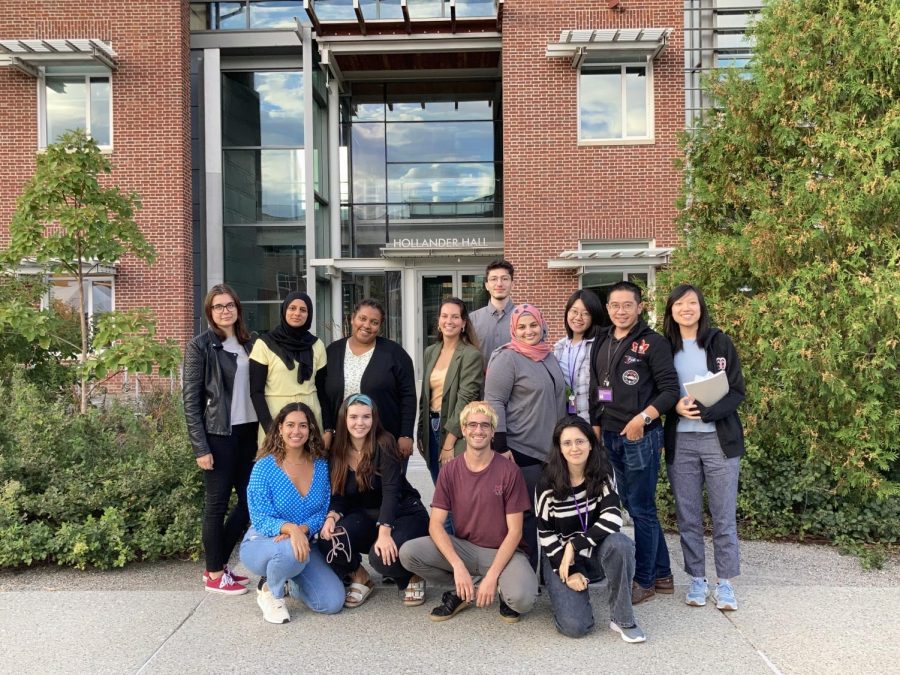 TAs and language fellows come to Williamstown from across the world to teach students at the College. (Photo courtesy of Shaina Adams-El Guabli.)

The Center for Foreign Languages, Literatures, and Cultures (CFLLC) welcomes about a dozen teaching associates (TAs) and language fellows every year who live, work, and take classes at the College, usually for the duration of one academic year. While both TAs and language fellows come to the College to share their knowledge of their languages and cultures while gaining exposure to U.S. culture, language fellows tend to have more teaching responsibilities compared to TAs, according to Administrative Director of the CFLLC Shaina Adams-El Guabli.

CFLLC chair Gail Newman acknowledged the problems highlighted in the op-ed, and said that the CFLLC has taken steps to address them, including expanding orientation and health insurance for TAs and fellows. “We took the op-ed seriously, and have been working tirelessly to respond to it,” Newman said. Nathan, however, said he saw the response as insufficient.

The op-ed accused the College of responding slowly and insufficiently to TAs’ complaints about racist incidents. While Nathan and former French TA Margaux Hee, the other writer of the op-ed, said they avoided detailing these incidents in order to maintain the victims’ anonymity, Nathan told the Record that one of the incidents involved another TA routinely making racially insensitive comments. The op-ed demanded that the CFLLC mandate TAs and fellows to attend workshops about discrimination.

Many of the language TAs and fellows who spoke to the Record said they found the orientation helpful. “During the orientation, I got the concept of how to study or work with college students [and] which behaviours are appropriate,” Chinese language fellow Tianwen Han said.

“It also brought us together as TAs,” Spanish TA Celia Domingo García said. “It was a good time to get to know each other a little bit more.”

Adams-El Guabli said she sees orientation as an ongoing process. “We know these conversations are not one and done,” she said. “I hold biweekly workshops with them, which is also part of cultural exchange.”

Some TAs and language fellows have become involved in student organizations on campus. Chinese TA Gwyneth Fung has joined the Zambezi Marimba Band, and French TA Samia Toorawa has attended events held by the Muslim Student Union and the International Students Association. “It was fun to see other international faces,” Toorawa said.

But without access to the student health portal, Toorawa was not able to join the equestrian team. More broadly, many TAs and language fellows have found it difficult to balance their position on campus as both a student and a teacher.

“I really want to know when I should be faculty and when a student,” Fung said. “I audit classes, and I also joined some extracurricular activities, so sometimes, I’m friends with the students, but sometimes, I’m also the teacher. I don’t know what my identity is in the school sometimes — it’s really frustrating.”

The hybrid status of language TAs and fellows as both students and faculty members was another one of the issues raised by the op-ed. Nathan and Hee wrote that because TAs are neither full students nor full faculty members, they “receive the worst deal from both sides.”

Newman said she only realized after reading the op-ed that the TAs’ and fellows’ health insurance did not include mental health coverage. This has been the case since the financial crisis of 2007-08, when the College made changes to the TAs’ and fellows’ status with regard to using student services, according to Newman.

But, Newman said, the TAs and fellows are now able to use their College-provided health insurance to work with a local therapist and have access to the telehealth service used by other staff.

Newman also acknowledged that the TAs’ and fellows’ ambiguous status was problematic. “[The CFLLC] has now gotten permission from the College to have them be designated fully as staff,” she said. This change of status will be implemented starting next year, according to Newman, and will enable the College to align TAs’ and fellows’ benefits more closely with those of other staff.

Settling in and teaching

For many in the current cohort of 13 members, the program is their first experience in the United States and outside their home countries.

Traveling to Williamstown from Beirut, Lebanon, was difficult for Arabic language fellow Hajar Al-Dirani, who experienced a visa delay and became homesick after arriving. “It’s my first time leaving my parents — leaving the family,” she said. “It’s really hard to be independent, to do everything alone.”

After getting into the groove of teaching, many TAs said they enjoy helping students at the College learn. “We are teaching students the language in a more personalized way [than at her previous institution],” Arabic TA Maha Bouhnin said.

German TA Melanie Brantner expressed a similar sentiment about the difference between teaching languages at the College and at home in Austria. “Here, it feels more personal,” Brantner said. “It’s just a better learning environment.”

Domingo García and Brantner said that as they settled in at the College, they were aware of the op-ed. However, they said that their experiences at the College have been positive.

“The [German] department and everyone here in the CFLLC has done their part to make this year a better experience for us,” Brantner said. “We have had so many orientation courses on people we can talk to, different changes … So far, I haven’t really experienced anything that was racist.”

The TAs and language fellows live in three houses on campus: Leigh, Pratt, and Sinclair Houses. “We’re creating a family,” Domingo García said. “In my house, everyone seems to have a role: There’s one who always emails for broken stuff [and] there’s another one who cooks sometimes.”

Fung’s birthday was in early October. “This was my first birthday outside Hong Kong, and some of the TAs gave me a surprise birthday,” Fung said. “I’m really touched, and I think they are really sweet.”

TAs and language fellows can choose to receive either a 14-meal dining hall plan or a check covering the cost of the meal plan that they can use to buy groceries. While some TAs and language fellows use the dining halls, others prefer to cook for themselves and see cooking as a way to connect with their colleagues. “Sometimes, we Chinese TAs and fellows cook in one house, and we share the meals with other TAs,” Han said.

French TA Saléna El Arage, who grew up in a small town in France, has found it easy to adjust to life in Williamstown but expressed mixed opinions about the lack of transportation. “I don’t have [the] stress of taking public transportation,” she said. “But on the other hand … it’s pretty hard if you don’t have a car to go [outside] Williamstown.”

This year, the Davis Center has worked to better integrate the TAs and fellows with the international community by formally including them in the International Students Association, according to Newman. In addition, the CFLLC has planned programming in collaboration with the Center for Development Economics (CDE), the art history graduate program, and International Student Services (ISS).

For Nathan, publishing the op-ed helped improve his situation because it raised awareness of the problems he and other TAs were facing. “People knew … something was happening,” he said. “And that actually helped a lot. So I think people should go and publish their stories, and they should talk about these things.”

But Nathan said that until the CFLLC publicly addresses the op-ed and all the demands laid out in it — which include bringing in an outside party to conduct an audit of all incidents of discrimination against language TAs — meaningful change is not possible.

“I believe [the CFLLC] if they say … they really want to change things,” Nathan said. “But they have not addressed the article. And if they don’t address it in public … nothing has changed.”

“I know that there have been talks, meetings, and positive changes within the CFLLC as a result of the op-ed. I believe that they are genuine,” Nathan added in a follow-up email to the Record. “An open apology and acknowledging what has happened will go a long way in helping me and those affected.”

Newman stressed that the CFLLC has taken concrete steps to redress Nathan’s complaints. “We are addressing the op-ed [by speaking to the Record] in this article,” Newman said. “And most importantly [by] the actions that we are taking in recognition of a history of discrimination.”