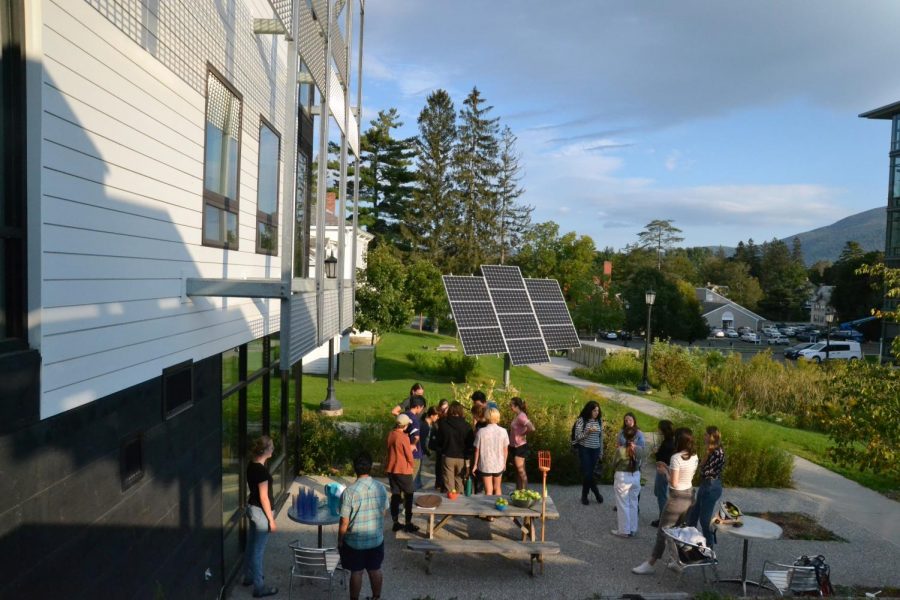 The Sustainable Living Lab partnered with the Zilkha Center to host a sustainable Cider Day on Oct. 2. (Photo courtesy of Huijun Huang.)

After decades of student activism in favor of affinity housing, the College announced last spring that it would offer Theme/Affinity/Program/Special Interest (TAPSI) housing for upperclass students in the 2021-2022 academic year. But only one group applied for and formed a TAPSI house this year: the Sustainable Living Lab (SLL) in Hubbell House.

The introduction of TAPSI housing comes after the College experimented with affinity pods for first-year students during the COVID-19 pandemic, when the stresses of living on campus were magnified and first-year students had less access to affinity-related Clubs that typically provide support and social spaces for people of a common identity. The two programs are unrelated, but Essence Perry ’22 of the Residential Life Working Group (RLWG) said that the success of affinity pods last year offered an example of how affinity housing can work and help students on campus.

Last year, after collecting feedback from the student body through a survey sent out by the Office of Campus Life (OCL) and by meeting with representatives from student and faculty groups, the working group found that students overwhelmingly supported the option of affinity housing. “There was a strong desire to provide more opportunities for students of shared experiences to have more opportunities out of their housing experience,” Director of Residential Life and Housing Patricia Leahey-Hays wrote in an email to the Record.

Students, such as Perry, who organized for affinity housing argued that it is an important way for students to receive formal support while living with students they feel comfortable with. “We informally create affinity housing for ourselves that’s not supported by the College, and that’s harmful in a lot of ways because there is no social support that’s connected to it,” Perry said. “I think this movement says that students should have a space that they feel safe and comfortable in but also receive support from the College so that they’re not forced to be isolated from everyone.”

Because the TAPSI system was not finalized until March 2021, the timeline for applying to live in a TAPSI house was short, leaving the many students who had already applied to be Junior Advisors (JAs) or House Coordinators (HCs) or to live in co-op housing without the opportunity to apply for TAPSI housing.

Leahey-Hays wrote that she and the rest of the housing team “were dealing with a much shorter application time frame during the inaugural year than we will be working with this current and future years.”

Perry said her biggest hope is that more students apply to live in TAPSI housing in the future, especially groups like Black Student Union and Queer Student Union, which have been pushing for affinity housing for years. For this year, however, the only TAPSI house is centered on environmental sustainability.

When the TAPSI housing application went live last spring, Jaya Alagar ’22 and Huijun Huang ’22 worked together to write a proposal for a house focused on sustainability. “Both of us are super interested in sustainability,” Huang said. “Environmental chemistry is pretty much what we’re focusing on in terms of our theses. We figured it was time for us to move onto sustainable behavioral changes on campus because, at the end of the day, if we want to cut down our carbon footprint, it has to stem from individual behaviors.”

But writing this proposal was no easy feat. “It required a lot of programming — more than anything I’ve ever experienced in other dorms on campus,” Huang said. “We essentially [came up with] weekly activities focused around sustainability and collaborating with different organizations on campus. There was a long list of requirements.”

Alagar said the extensive requirements may have been overwhelming for some students who might have wanted to apply. “It did seem like for the first year of TAPSI, it was maybe too many for us to think about, and also something that maybe could deter other people from applying,” she said.

The pair also had to collect at least 30 signatures from students who were potentially interested in living in the SLL before the College’s residential life staff would consider their application. They ended up getting enough signatures, but that initial interest did not necessarily translate into full-fledged commitment. Some of those signatories did end up living in Hubbel but the rest of Hubbell’s residents simply picked into the house during the regular housing lottery without considering the TAPSI programming. Because of the especially large on-campus population this semester, there were problems with the regular housing lottery — there were not enough rooms to accommodate every student at first.

“I decided with my pick-in group to pick into Hubbell together,” said Hikaru Hayakawa ’24, one of the students who initially expressed interest in the SLL. “Even though there are some people who joined [the SLL] later on … it’s nice to have people around with a common interest so you always have something to talk about. Jaya and Huijun are doing their best, and it’s really paying off.”

“People are coming into this with different mindsets,” Alagar said. “We have sustainability experts living with us, but also, we have people who merely picked into this house for convenience due to its location. Thinking about the mission evolving is an important piece of what we’re doing too.”

Instead of having HCs in TAPSI housing, there are Community Coordinators (CCs) who have a different — and perhaps more demanding — role than HCs. Alagar and Huang serve as co-CCs for the SLL. Along with decorating the house, coordinating weekly snacks, and meeting with Housing staff, the CCs have had to organize many different activities based on the goals and values of the SLL, such as the Cider Day on Oct. 2 that the SLL co-hosted with the Zilkha Center.

Alagar also said that communication with the Area Coordinators (ACs), who are entirely new to campus this semester, has added another layer of complexity. “The amount of communication we have to do on a daily basis is a lot,” she said. “It’s the [ACs’] first year as well, so [us] not really knowing how they fit into the grand scheme of things [and] working with other people in housing who might be more established, but still trying to delegate responsibility to Area Coordinators — that whole dynamic is something they’re still working out, and we have to work alongside [them].”

One of the biggest challenges the CCs have faced in Hubbell is the house itself. Last academic year, Hubbell House was used as quarantine housing, so it had not been fully inhabited since the 2019-2020 school year. Huang said that, upon moving in, she noticed multiple issues. Because the house had not been lived in for a while, it was run down to the point where there were spider webs on the walls and mold on the windowsill. The ground had holes in it, according to Huang, which bugs were crawling out of. The most difficult issue was a leak in one of the bathrooms that led to water dripping down to the first floor. The two residents who were sharing a room on the first floor were displaced and are now living in the basement of Mission Park.

Huang also said that the house is not well suited for sustainability; since no one could find the temperature control, the rooms had heat running continuously, and to equilibrate the temperature, students opened their windows. This continual running of the heater was not environmentally sustainable, Huang said.

Alagar said the College should pay more attention to the TAPSI house selection process in future years. “More intentional house selection is key for future iterations of the program,” Alagar said. “Part of the reason we got the house we did is because of its proximity to the Zilkha Center, but the building itself and what that looks like and how people experience it can stand to be changed.”

But despite these challenges, Alagar and Huang said that they are happy with the work they have done so far and that residents are mostly engaging in their special programs. “For the most part, people are really interested in cutting back on their waste,” Huang said. “There’s been a lot of cooking happening in the kitchen, so that’s really nice to know, especially because a lot of them are seniors going out into the real world in the next six months, [so] they really want to be able to be more self-sufficient, and by cooking for themselves, that really cuts down on their waste.”

The pair also lobbied for a compost bin in Dodd neighborhood, which has since been implemented.

Alagar and Huang agreed that TAPSI housing is a net positive for the College, and they said they hope the program continues after this year with some changes. “Having a group of people of shared values, ideas, and backgrounds, especially now, is super important,” Alagar said. “I’m glad we’re able to provide that for the small community that we do have. I think in the future, the College can make more intentional efforts to having it be more pervasive.”

Leahey-Hays confirmed that TAPSI housing will continue to be an option for students in future years. “The TAPSI program can be an incredible opportunity for students who participate,” she said. “At an institution of higher learning, students are looking for places to grow academically, and as a residential college, students may be looking to live those experiences with other students in the residence halls who have similar interests or identity.”

Perry stressed the importance of student voices in the process of affinity housing becoming a reality. “This was very much a student-driven change,” she said. “Yeah, it happened in a committee, but this wouldn’t have happened if students weren’t pushing for this forever… Students actually matter, and this is a tangible example of that.”