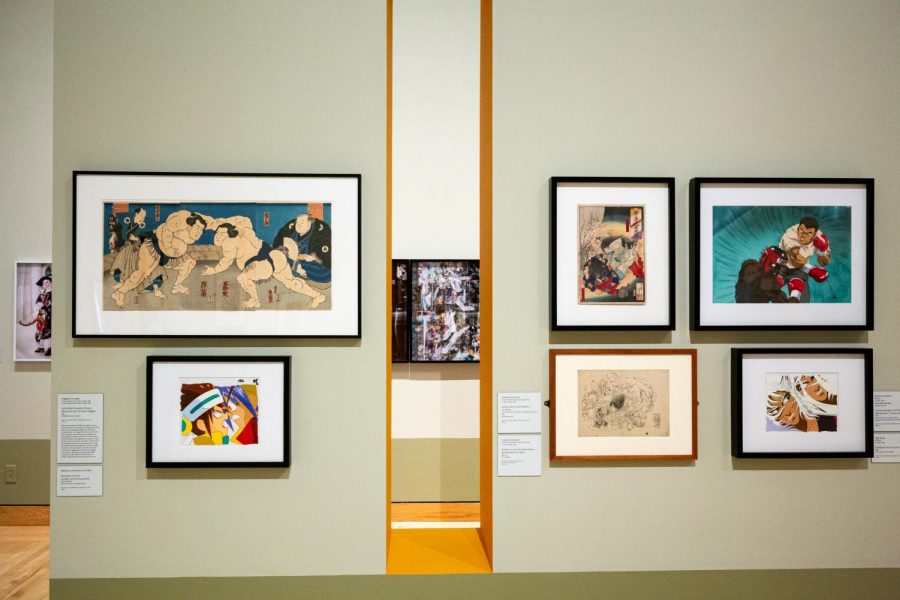 The story of Japanese popular culture is the focus of Repro Japan: Technologies of Popular Visual Culture, a new exhibit at the Williams College Museum of Art (WCMA), curated by Professor of Comparative and Japanese Literature Christopher Bolton. The exhibit, open until March 20, 2022, explores, as its website claims, how “Japanese visual culture has been reproduced and transformed across media and through time.” It acts as a lens to understand Japan as a cultural powerhouse that shaped the world across multiple centuries.

Japan’s rise into prominence in the global landscape in both popular and fine art culture mirrors the journey of popular culture replacing high culture. The influence of Japanese prints on the West, the development of cinematographic technology, and the proliferation of comics and animated films are examples of the endless contributions Japan has made to modern media and visual art.

The beauty of popular culture is that it is ever-changing. It consumes and digests everything in its way to reproduce variations that reference different subcultures, parody or criticize predecessors, bridge seemingly disparate communities, or even appropriate different perspectives. It’s in pop culture’s DNA to permeate our daily lives, to the point where we forget that it is as much a refined practice of art as it is enjoyable, consumable content.

The first thing I noticed walking into the exhibition is that Repro Japan feels like pieces of Japanese culture stitched together. It’s not organized by timeline, region, or style as you would expect at other exhibitions that survey a particular country’s culture. The two galleries are instead organized by rough groupings of mediums, ranging from textiles and woodblock prints to manga, 3D prints, and cosplay costumes and performances.

The exhibition first invites you to take a look at textiles and prints from the Edo period (1603-1868). During the Edo period, an interesting cycle was at play. New fabric-printing technologies inspired by woodblock print techniques incorporated new patterns into popular fashion. Woodblock prints in turn portrayed these patterns on clothes worn by kabuki performers, courtesans, and other subjects of the prints. A standout work was Utagawa Kunisada’s The Kabuki Actor Ichikawa Ichizō III as Iwami Jūtarō (1860). I immediately noticed the abstract background of pink rectangular patterns contrasting with the gray; the surprisingly modern composition of using the background to create a specific aesthetic rather than accurately portraying what was actually behind the figure hints at the creativity of Japanese printmakers of the time. The juxtaposition of the replica shiborizome (tie-dyed) patterns made on woodblock on Ichizō’s clothes with actual shiborizome on the hanjūban (short undercoat) hinted to a process of reproduction between different artistic communities of Japan. The commonalities in the methodology and the pronounced graphical designs between woodblock and fabric printing chronicle the process of Japanese artists taking inspiration from other craftspeople and artists.

Repro Japan also points out how printmaking continues to influence artists today, particularly manga and anime artists. Telling a story with a sequence of hand-crafted panels has bloomed in the modern day as graphic novels and hand-painted animation cels. It is easy to see the techniques used in Edo period printmaking reflected in modern manga or anime creations.

It is also important to note the dynamism and unique composition that the artworks share. For instance, look at Tsukioka Yoshitoshi’s Yamato Takeru and Kawakami no Takeru (1885). While the abstract background, alluding to a sunset, shines a spotlight on the figures, Yoshitoshi’s expert composition conveys a potent and heroic downthrust. Directly to the right of Yamato Takeru and Kawakami no Takeru is the oversize animation cel from Fighting Spirit TV series, Episode 13 (2000). As you move your eyes from the 1885 woodblock print, the context changes instantly, from the heroic sword battle of two Japanese mythical figures to an intense spar between non-Japanese athletes. However, what remains intact is the unique dynamism — just by looking at the two works, your body feels a sense of direction and force that explodes out of the frames. Making drawn images feel lively and powerful was a culmination of centuries spent perfecting the infusion of a still image with energy.

The exhibition also tells a nuanced story about oppression, particularly around orientalism and sexism.For example, Felice Beato’s Moos’mie (ca. 1868) from the Views of Japan album portrays Japanese people and culture in a condescending light to make the photographs more palatable to a Western audience. Even the original plaque right under the photograph, written by James W. Murray, is written in a patronizing tone: “[a]nd as the houses of the commonalty are always more or less open, and they may be said to live in public, a freedom and openness is engendered.” Considering Beato was a commercial photographer selling work to a western audiences, Moos’mie is an excellent example of how locking East Asia in frames of exoticism and condescension sold so well.

I also spent a lot of time in front of Double Mirror Reflections of a Beauty Getting Glamorous (1823) by Utagawa Kunisada. The imagery of a woman looking into a mirror recalls familiar images, perhaps Francois Boucher’s Madame de Pompadour at Her Toilette (ca. 1760). It made me consider: What is with the desire to observe “beautiful women” from up close, perhaps infringing on their privacy, and framing them under control? Why can we see cases of this form of voyeurism in fine art across different cultures? What makes Madame de Pompadour’s toilette seem like a show of force and power while Kunisada’s Beauty is portrayed as unaware, innocent, and perhaps even docile?

With all this having been said, Repro Japan is not a straightforward exhibition. It feels much more like a general survey of Japan’s cultural heritage than it is a comprehensible message. At times  the works seem to lack context and are sparsely related. If you walk in expecting to be spoon-fed a poignant perspective about Japanese visual culture, you will be disappointed. The objects were brimming with interesting stories but occasionally it felt like they were behind a veil of neutrality rather than being unveiled through a coherent, pointed narrative. Walking through the galleries was most definitely an enriching, educational experience, but it sure does feel much more like a lecture than it does a conversation with the artworks.