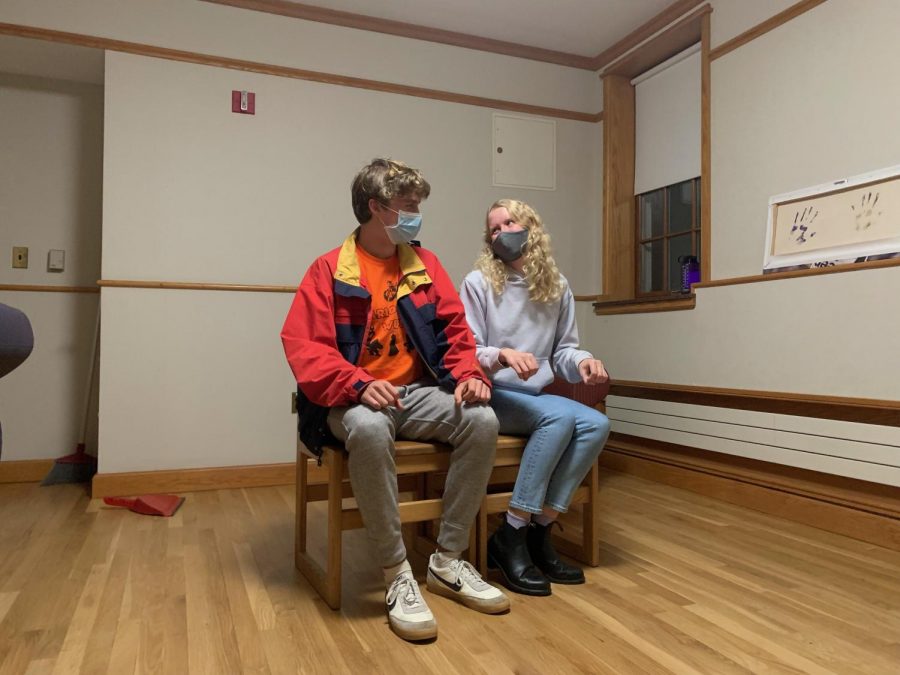 With lifted COVID-19 restrictions, Cap & Bells is now able to rehearse in person.

Cap & Bells, the College’s student-run theatre group, is returning live theatre to the College this weekend with a post–World War I love story, a rom-com, and a swashbuckling satire. The upcoming Weekend of Theatre features three short plays: Ferris Wheel, Argh!, and It’s a Terrible Day to be Me, directed by Shenba Vairavan ’24, Isabel Williams ’24, and Amalia Culpepper-Wehr ’24, respectively. The shows premiere in Griffin 3 on Oct. 29.

In its email to potential auditionees, Cap & Bells advertised the Weekend of Theatre as an exciting, low-stress way to get involved with student theatre. “It’s just for people that are trying to figure college theatre out,” Vairavan told the Record. “I think it really makes theatre a space for all interest levels and all experience levels.”

Vairavan is directing Ferris Wheel by Mary Miller, the story of two people falling in love on a Ferris wheel: a woman who is afraid of heights and a man who is afraid to quit smoking. “It’s just adorable,” Vairavan said. “It’s adorable with a lot of work put into it. A lot of things at Williams are serious with a lot of work put into them, but no one has the capacity to be serious all the time.”

In directing the play, Vairavan said she appreciated Ferris Wheel’s cheesiness. “You know when you watch a good rom-com and you’re like, ‘That was so poorly written, and it was so stupid, and for some reason, I feel so happy,’” she said. “I want people to laugh. I just want an emotional reaction of joy.”

Culpepper-Wehr is also directing a love story — one that she wrote. It’s a Terrible Day to be Me is about relationships and queer love after World War I. She wrote the full-length play in her sophomore year of high school and is workshopping a short section of it with Cap & Bells. “The absolute care I’ve seen from the cast is very rewarding as a writer,” Culpepper-Wehr said.

The actors in It’s a Terrible Day to be Me remarked on the advantages of performing a smaller section of the play. “We’re trying to give the audience a sense of the full play in a much shorter amount of time, so it really feels like there are no throwaway lines and that every word is important,” Charlie Smith ’25 wrote in an email to the Record.

Culpepper-Wehr said her own life experience inspired the play. “The experiences of being involved in student theatre and being a high schooler — figuring out who I was — put me in the place to write a play that does a lot of reflecting about identity,” she said. “A lot of the show deals with daily life and people existing as they are, so I guess it’s just a strange sort of celebration of being a person.”

Williams, meanwhile, is directing a satirical piece called Argh! that explores theatrical ‘play’ through a tale about pirates. It was written by Mackenzie Grace ’22. “This play is silly,” Grace said, “And what better time than right now — after so much heavy stuff happening in the world, why not do something silly?”

Grace wrote Argh! for a 10-page dialogue-writing assignment at a theatre program in Connecticut last year. Because she had never written a play before, she said she left many stage directions open to director interpretation, which allowed Williams to insert original dialogue, jokes, and action.

Williams also said Argh! provides ample opportunities for collaboration between the writer, director, and the actors. “I want the people I’m working with to feel ownership over their show — to make sure they feel like they’re making this with me,” Williams said. “And that’s why I love doing this show, because it’s so collaborative. Obviously, comedy is essentially a collaborative exercise.”

One of the show’s actors, Cassidy Pawul ’22, remarked on the creative license she has been allowed due to the show’s collaborative nature. “A solid third of what you’ll see on stage is not written in the official script, for example, but was collaboratively created by the actors in the scene, the actors watching, and our director,” Powul wrote in an email to the Record. “And as an English major, who has to … think about the most effective/most ethical ways of creating written art, I deeply appreciate Argh! for showing that.”

Vairavan also noted that smaller casts have allowed for more collaboration during rehearsals for Weekend of Theatre productions. “The smaller the cast, the more you get to work with them as individuals, which has been really nice,” Vairavan said.

Because Cap & Bells did not hold in-person performances last year, many of the directors noted their excitement to produce an in-person play. “That element of connection that I’ve desperately missed is really back, and I’m so excited for there to be an audience,” Culpepper-Wehr said. After acting in virtual performances of Ghost Quartet and Edges last year, Culpepper-Wehr said the pandemic served as motivation to direct It’s a Terrible Day to be Me this fall.

Williams shared a similar sentiment about bringing live theatre back to campus. “We’ve missed theatre so much, and this is one of the first opportunities since 2019 that Williams has had to put on really good, really fun, really interesting, complex, well-crafted student theatre,” she said. “It’s been a hard couple of years. We all deserve to come together and laugh and have that communal experience. That’s the whole point of theatre!”

“Why not come and laugh for a weekend?” Grace said, adding, “Take a goddamn break and come watch some theatre.”

Executive Editor for Arts Tali Natter, who is the co-artistic director of Cap & Bells, was not involved in the writing or editing of this piece.