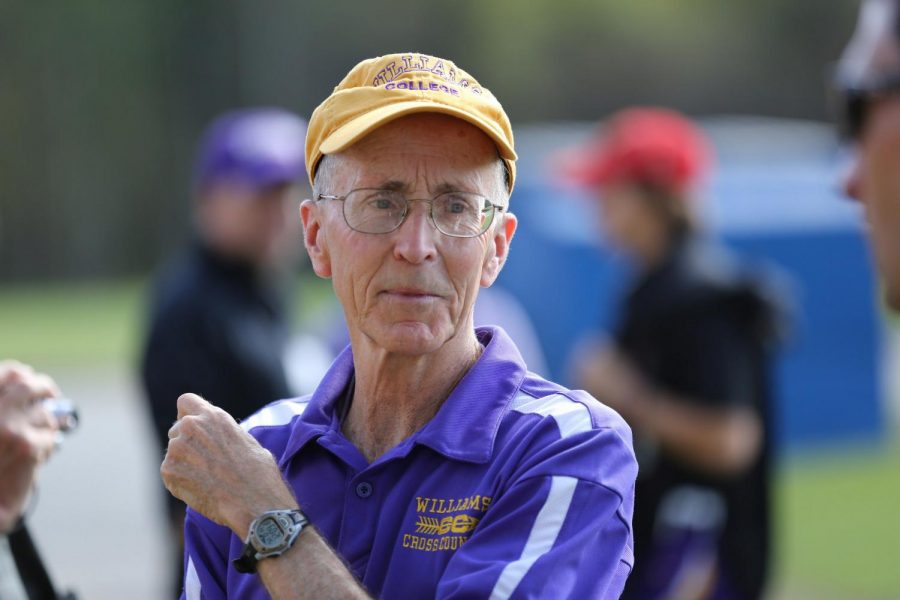 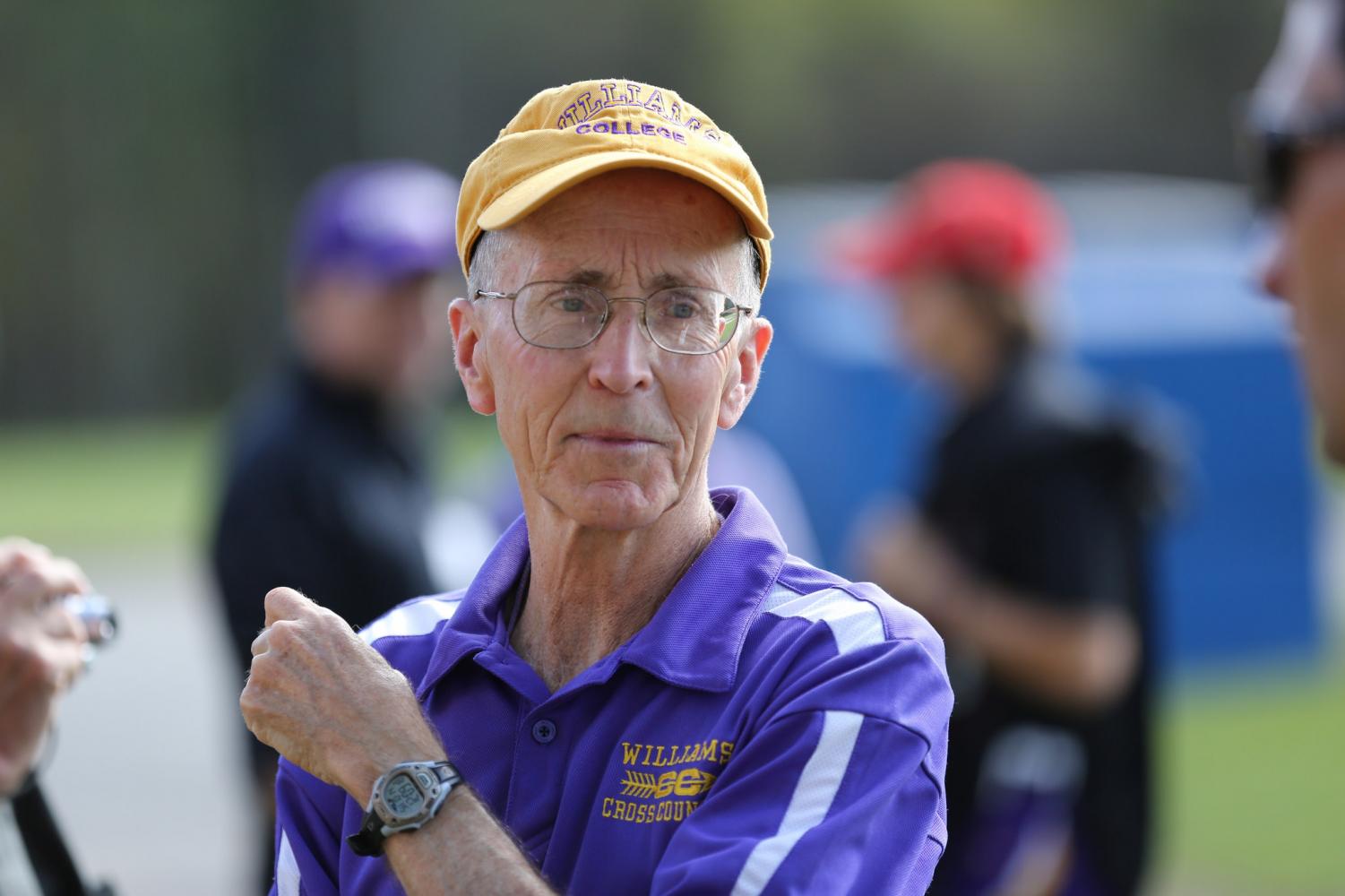 The Record publishes “Coach’s Corner” interviews to give readers the chance to get to know the coaches of their favorite Eph teams. This week, we checked in with Pete Farwell ʼ73, head coach of the men’s and women’s cross country teams and assistant coach for track and field. The Record sat down with Farwell to discuss the cross country team’s hot start to the season, the changes he’s seen over his 40 years coaching at the College, and his interest in ecology. This interview has been edited for length and clarity. (Photo courtesy of Pete Farwell.)

Kent Barbir (KB): I know you’ve been coaching at Williams for a long time, but how have things changed since you first started off here?

Pete Farwell (PF): Oh my goodness — it’s changed a lot… [A] really neat thing [is] when we went to a co-ed team [in 2000]. Each of the teams learned some other nuance of how to train or how to have team ethos or togetherness. That’s been one big part.

Another is [that] a lot about recruiting has changed so much. It used to be a little more by mail and phone calls, not internet. And there’s so many more people writing in now, especially after the remote year, when all the high school kids had lots and lots of time. So we kind of got inundated with emails and applications.

I think what hasn’t changed is the student athletes that come to Williams. [They are] really focused on academics first and athletics second. The competition certainly has grown over the years. We had some really good runners back in the old days and very, very good teams, and I think the number of good teams has grown and the depth of the field in the NESCAC has changed quite a bit. So [while] we had a little easier time of putting together some streaks of winning championships [back then], it’s gotten a lot [more difficult]. And that makes it exciting. It’s really neat when the teams are more equal.

KB: So you would say the college student-athletes of today aren’t so different from those of 30 or 40 years ago?

PF: I don’t think so in the sense of a real love of running. We have such an astounding area to run, and that hasn’t changed, [although] it [did get] a little wetter than usual this year and maybe eroded just a teeny bit [of the] long-term geology of Williamstown. But it’s just what it was, with all the dirt roads and trails. I really call it runner’s paradise. I think that attracts recruits, I hope, and we certainly in our training take great advantage of the natural areas around here. We’re not running on the track all the time, [which is very rare] actually in cross country.

KB: The men’s and women’s teams have had a really strong start to the season. What would you attribute that success to?

PF: The success of cross country is often based on long-term progression of improvement. Last fall, we didn’t really have a season, so it was very different. [We] did have a whole period of [time] to train without racing, and sometimes that’s very valuable. You build a big base, you put in more time, you have more time, and they did that in the winter and then especially in the spring. We didn’t even think we were going to get some track meets, but we finally did in May. And then they [followed] our training plan over the summer, loosely. They get it, and then they create what fits in their schedule wherever they are around the country. And we were just very impressed and pleased with the improvement that we’ve seen. They’re very focused and excited and determined and working together. And when you have training partners [like] that, it really flows together well.

KB: You also coach for track and field. Are there any big differences between the way you approach coaching track and cross country?

PF: In general, my assistants are starting to do more of the track part, and that’s one way we build them up to be ready to apply for further jobs and get fulltime cross country [or] track coach type of jobs and give them a little more autonomy because they know a lot. But in general, there’s going to be a bit more focus on lifting because we have more time. As soon as we got on campus, [we were] almost in the [cross-country] meets. In track, we have more time; we take a break after cross country, we get more into lifting, rebuilding the base, focusing on a lot of fundamentals. And in cross country, everybody’s training for the same distance. But in track, there’s a lot of different small groups and the workouts are varied. So, on any given day, you might have three or four different workouts going and that takes a little bit of juggling.

KB: If you hadn’t become a coach, what job do you think you would have had?

PF: Sometimes I say I haven’t even had a job here. It’s just been such a pleasure to coach. It’s kind of nice to go through life without a job. [Laughs.] But I’m not sure. When I first got out [of college], I looked into going into business or teaching. I started graduate school in teaching, and I lasted about two days. I said, “I don’t think this is for me, what they’re doing here in this kind of program.” I [also] got somewhat recruited by business outfits and things, but I just didn’t feel like I wanted to do that. I didn’t really want to wear a coat and tie for my life. I do like ecology. And, you know, I might have gone into something like that, especially in this period. I think I would have been somebody advocating to overcome climate change.

KB: I’m sure you must have won a ton of medals and awards by this point. Have you ever run out of space to put them?

PF: If you want me to put my wife on the line, she’s ready to take them to the Tag Sale or something. [Laughs.] I think we have a lot of awards for the teams with the NCAA trophies and all that kind of [stuff]. But other things were fairly small back then, just little medals and stuff. So I didn’t have so many things, I don’t think.

KB: Do you know how much longer you plan on coaching? Or is there no end in sight as of now?

PF: You know, I’m pretty near that age, and it may have to come around sometime. I think it’s been tough in this remote period to get through, [and] I don’t know if it’s the end of the tunnel, but there’s certainly been a lot more sunlight now. And just being back with the team is such a joy that I’m just living in the present right now and really taking advantage of every minute during this cross country season.