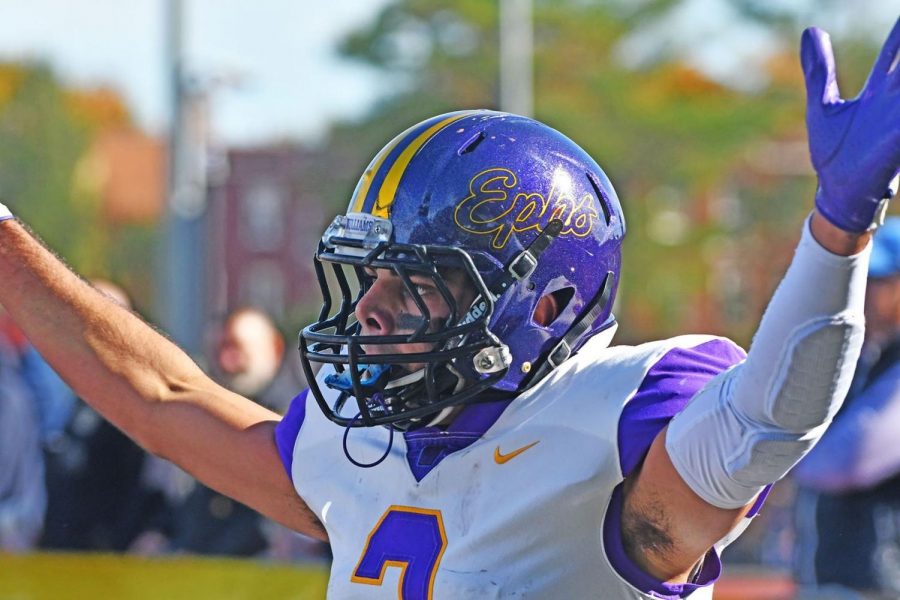 Football continued its undefeated start to the season with a resounding victory away at Bowdoin. (Photo courtesy of Sports Information.)

Football (3–0) cruised to a 28-3 victory over Bowdoin (0–3) on its home turf on Saturday. The Ephs held the Polar Bears to a 21.4-percent conversion rate on third down and rode an efficient passing game that sparked two touchdown drives in the final five minutes of the first half.

Quarterback Bobby Maimaron ʼ21.5 enjoyed his best passing game of the season, going 16 for 25 with 265 yards and four touchdowns. Tight end Justin Burke ’21.5 led the Ephs with six receptions for 106 yards and started the scoring with a 51-yard touchdown on a vertical route down the left seam. Wide receiver Frank Stola ʼ21.5 added four catches for 73 yards and two touchdowns of his own.

“[Bowdoin was] playing tough against the run and had a lot of people in the box to slow down the running game,” head coach Mark Raymond said following the win. “Bobby was really able to connect in the passing game, though. We had a good mix.”

On defense, the Ephs held the Polar Bears to just three points and put both Polar Bear quarterbacks under heavy duress for the majority of the game. In the first half, the Ephs’ defense held quarterback Griff Stalcup to just 3 of 10 passing for 20 yards, with only one completion going for longer than two yards. Although backup Andrew Boel attempted to spark the offense in Stalcup’s place, the Polar Bears didn’t manage a single point in the second half, even though they moved the ball more effectively through the air than they did in the first half.

After Burke’s 51-yard touchdown put the Ephs ahead 7-0, the Polar Bears found some success handing the ball to Andre Eden, who finished the game with 168 rushing yards on just 23 carries. Although Eden gashed the Ephs’ defense on the ground for multiple chunk plays — including a 30-yarder — on the drive, the Polar Bears settled for a 35-yard field goal to cut the deficit to 7-3.

Raymond was excited to feature Burke in the game plan against Bowdoin. “Getting [Burke] involved really loosens up a defense when they’re committed to the run,” Raymond said. “Justin made them pay.”

Toward the end of the second quarter, the Ephs extended their lead with two impressive scoring drives. After a series of punts, Maimaron ignited the Ephs’ offense on a 2-and-5 play from the Polar Bears 30-yard line. After a play fake to Nicholas, Maimaron rolled to his right while being chased by three Polar Bear defenders and threw across his body to find Nicholas wide open in the flat. Nicholas rumbled to the Polar Bears’ 5-yard line, and two plays later, Maimaron found running back Dan Vaughn ʼ22.5 wide open in the end zone on a swing pass out of the backfield.

After forcing a Bowdoin punt, Maimaron threw three pinpoint passes to extend the men’s lead. On a very similar rollout to that of the previous drive, Maimaron found Stola along the sideline to convert a key third-and-6 with under a minute to go. After hitting wide receiver Mike DeGasperis ʼ23 on a go-route to get inside the 5, Maimaron then threw a beautiful goalline fade to Stola to give the Ephs a 20-3 lead. The third successful extra point of the day by kicker Ivan Shuran ’25 made it 21-3 at the half.

In the third quarter, the Polar Bears led a long, methodical drive downfield, converting a fourth-and-5 in Eph territory to get into the red zone. However, the Ephs’ defense held the Polar Bears to another fourth down attempt, and Boel’s ensuing pass sailed through the hands of wide receiver Aise Bream, leaving the Polar Bears with no points despite the drive lasting over seven minutes. Two plays later, Maimaron secured the win with a deep pass that Stola hauled in over his shoulder, dragging Bowdoin defensive back Myles Hugee with him into the end zone to extend the Ephs’ lead to 28-3.

The Ephs’ defense kept Bowdoin out of the red zone for the rest of the game, and the offense ran out the clock from there.

On Saturday, the Ephs will play on home turf against the Colby Mules (1–1).