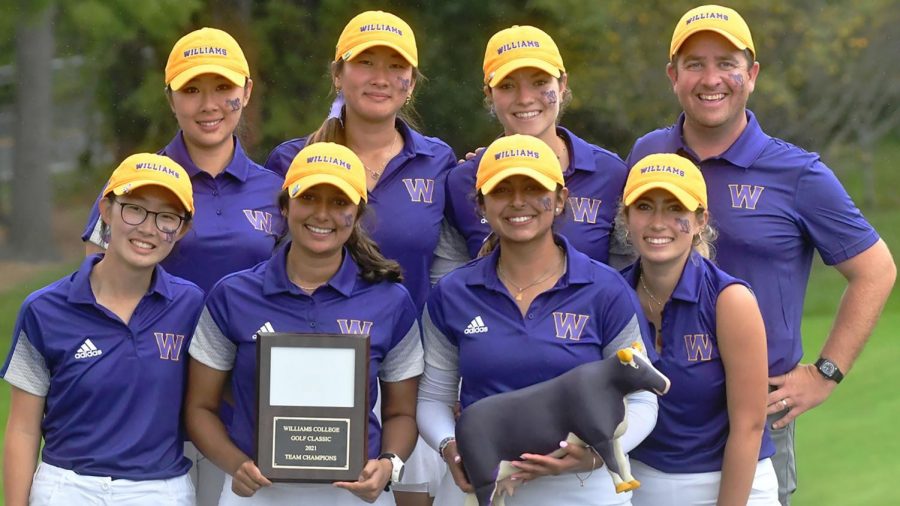 In a record-breaking weekend at the 50th annual Williams Golf Invitational, women’s golf made a 10-stroke surge on the second day of the tournament to take home the first-place trophy. The women posted a second-day score of 290 to break the single-day invitational and course record set by Amherst a day prior. Previously, the team record at Taconic was 296, set in 2019. The two-day combined score of 590 also shattered the team’s two-day record of 308-289, set at Ledges in Hadley, Mass.

On the first day of the invitational, with 56 players on the field, the course was in immaculate condition for low shooting. After 18 holes of play, the women posted a team score of 300 (+16) to sit in second behind Amherst, who posted a round of 292 (+8). New York University (NYU) was in third with a team total of 310 (+26). The leaders in the clubhouse were the Mammoths’ Gihoe Seo and Janelle Jin, who both shot an even-par round of 71.

“As a team, I think we all felt like we left a few shots out there, especially since we know Taconic inside and out,” Yturralde said on Saturday, the first day of the invitational. “I’m very confident that we’ll come back with vengeance tomorrow and drop some low scores for our fans.”

“It is really special to welcome all the players to our home event,” head coach Tomas Adalsteinsson said on Saturday. “Our team performance was strong. We had a lot of birdies collectively, but we also left some shots out there. Tomorrow, we will continue to stick to our game plan and look to capitalize on our opportunities.”

Individually, the Ephs swept the field. Zhuang followed up her three-over 74 on the first day with an evenpar 71. Her two-day total of 145 put her on top of the leaderboard. Amherst’s Seo, who shot 71 on the first day, posted a score of 74. Seo and Zhuang shared the top score for the tournament, but the medalist honors were ultimately given to Zhuang after a one-hole playoff on the ninth hole. While Seo holed out for a bogey, Zhuang’s bunker shot hit the pin and dropped, allowing her to one-putt for par.

Three shots back was Yturralde with a two-day total of 148. Her solid score of 75 put her T4. Right behind her was Gio Kim, who shot a one under par 70. Not only was it the field’s lowest single-day score, but it was Kim’s first collegiate under par round. Her two-day total of 149 placed her sixth in the field.

“I was very happy with how I played today — my irons shots were much more accurate, which I think was the main reason I played better,” Kim said on Sunday. “All in all, I was happy to contribute to the team score today.”

Rudra posted a hard-fought 79 after struggling on the greens all day. Finally, Bedi finished the scoring for the Ephs with a 79 after holing out for an eagle on her first hole.

“It’s always fun when the team sets new records,” Adalsteinsson said. “They have put a lot of work in and trusted the process. They play for each other, support each other, and celebrate each other’s successes. I’m a very proud coach. I can’t ask for anything more from them. They deserved a record-breaking day!”

The Ephs will play in the NESCAC Championship Qualifier hosted by Bowdoin on Friday.

Joanna Kim is a member of the women’s golf team.