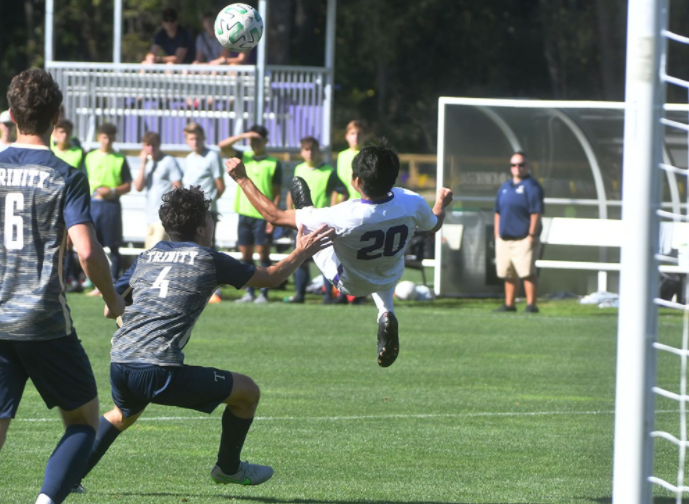 In a non-conference match last Wednesday, a last minute goal from Springfield College’s Maitoe Suppasuesanguan secured the Pride’s win over the Ephs. With the win, the Pride moved to 4–2–0 while the Ephs fell to 3–2–1.

In the first 10 minutes of play, the Ephs did an excellent job creating chances from out wide, putting pressure on the Pride back line to deal with crosses.

The Ephs applied pressure on the Pride throughout the first half, with Felipe Gutierrez ʼ25 and Nick Boardman ʼ22.5 winning challenges in the midfield to regain possession of the ball for Williams.

In the 22nd minute, Springfield won the ball in their final third. Williams goalkeeper Michael Davis ʼ23.5 was called into action, denying a shot from Suppasuesanguan.

The rest of the half was a back-and-forth affair, with neither side able to push ahead.

In the first 15 minutes of the second half, the Ephs did well to deal with dangerous passes into their own 18-yard box. Will Felitto ʼ22.5, Eamon Gara Grady ʼ23.5, and Jamie Holland ʼ22.5 all made strong defensive contributions, cutting off the Pride’s through balls in behind.

In the 69th minute, Luke Swann ʼ23.5 shot a cross into Springfield’s danger area and Dylan Kelemen ʼ25 lunged at the aerial ball, forcing Springfield goalkeeper Clayton Knibbs to punch the ball to safety.

At the 74-minute mark, Springfield had a big opportunity with Pride forward Andrew Ma hitting the crossbar from 13 yards out.

On the ensuing corner kick, Eph keeper Ben Diffley ʼ24 made a crucial save, rising above the Pride attackers to snatch the ball from the air.

With 2:30 remaining in the game, Springfield grabbed the game-deciding goal off a 15-yard volley from Suppasuesanguan.

“It was a disappointing result, but I’m very proud of the guys for fighting until the very end,” head coach Steffen Siebert said. “It’s moments like these where we will learn and grow closer as a team.”

The Ephs bounced back on Saturday as they hosted Trinity in their third NESCAC match of the season, coming out on top 2-1. Nathan Song ʼ22.5 tucked away the game-deciding goal off a pass from Boardman. In the early second half, Boardman received the ball in the midfield and linked up with Song. After the duo maneuvered their way between the Trinity center backs with some deft combination play, Boardman laid the ball off to Song, who tucked the shot away past the Bantam goalkeeper Bernardo Simoes.

Trinity set the tone early on a short corner in the fourth minute. The ball was played to the feet of Peter Bronson, who whipped a cross to the back post. Matthew Moran met the delivery and headed the ball past Diffley from six yards out.

The Ephs had a solid chance in the 29th minute off a floated free kick cross from Nick Ranieri ʼ21.5. Felitto was able to jump above his marker to head the ball, but he put it just wide of the right post.

At 39:52, Williams winger Justin Adams ʼ22.5 curled a ball into the box from the left side where it fell to Tate Michelson ʼ25. Michelson headed the ball across the six-yard box and Kelemen brought the ball down to Jake Saudek ʼ22.5. Saudek settled the pass and slid the ball into the bottom-right corner of the net.

In the 59th minute, Trinity’s Alistair Matule was able to beat a Williams defender and drove the ball into the box on a break-away. However, Diffley came out big and made a confident save to prevent the Bantams from equalizing.

In the last 10 minutes of the game, the Ephs locked down defensively and fought off the Trinity attack to secure the win.

Simoes made eight saves on the day, while Diffley made three.

“The guys did really well today, and I’m really proud of how they responded against adversity,” Siebert said. “We worked extremely hard to get back into the game and I believe the result reflected our efforts.”

Next up on the Ephs’ schedule is a NESCAC doubleheader weekend. On Saturday, Williams will travel to Amherst College to take on its Little Three rival at 2:30 p.m.. The following day, at 2:30 p.m., the team will pay a visit to Connecticut College.