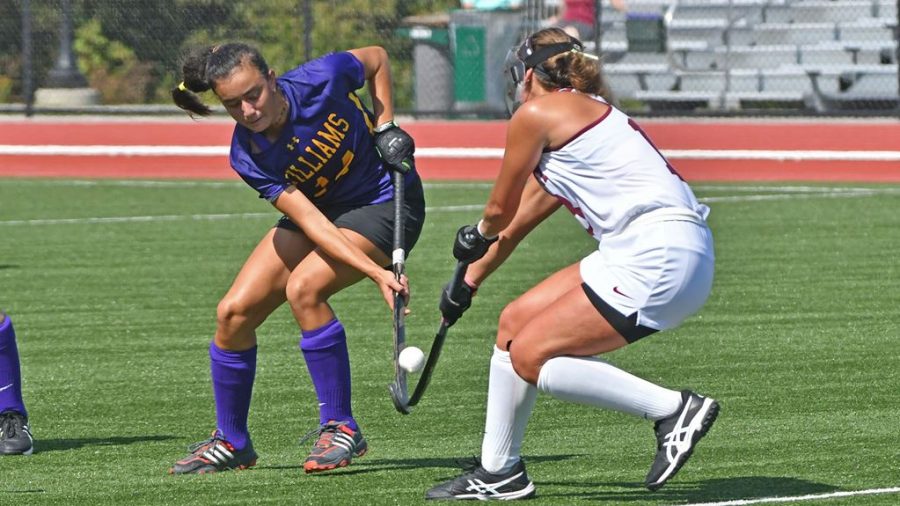 In the first half, the Ephs led the shots battle 5-3, in part led by the midfield play of Siobhan Morrissey ’22, Jacqui Sandor ’24, and Emily Batchelor ’23. The Ephs tried to catch the Bantams’ defense off guard with its seven corners as opposed to Trinity’s one, but the Bantams held strong, preventing the Ephs from scoring. The sole corner by Trinity proved to be the ultimate differentiator; the Bantams scored off of a point-blank goal from Ashley Zigler at the 20-minute mark. Her first career goal proved to be the only one for either side in the game.

To start the second half, Caelin Flaherty raced to the Ephs side and had a one-on-one opportunity to send the Bantams up by two goals. Gates Tenerowicz ’23.5 made an excellent save on the right side of the net. On the other end of the field, Liz Welch ’22 opened the period firing, forcing another corner that the Ephs couldn’t capitalize on. Molly Hellman ’24 also got in on the action, batting down aerial passes and maintaining control.

The Bantams’ Isabella Deveney and Elle Fair defended Shea van den Broek ’23, holding her quiet for the majority of the game. While Van den Broek had one opportunity late in the third quarter, she couldn’t quite control it, sending it wide right. It was a similar story for Lauren McCarey ’23 and the rest of the Ephs, as Trinity stayed in front of the ball handler exceptionally well. “I think they capitalized when we didn’t capitalize,” McCarey said.

Barrale and Welch both emphasized that they created opportunities and felt in rhythm, but couldn’t finish in those critical moments. In total, Williams held a 9-4 advantage in shots and a 12-1 advantage in corners.

The Ephs, however, bounced back on Sunday, when Catherine Torres ’23 scored the only goal of the game to give the Ephs the 1-0 win in their first ever game against Montclair State University (4–3). The Ephs were patient to start the second quarter; they reset at the center of the field before they found Torres, who turned around and flicked the ball off of a defender, sending it into the goal. Before the team arrived at Sprague Field, they indulged in rainbow bagels, but that didn’t make them any less hungry for a win after the loss in-conference yesterday.

The hunger came through in the foul totals, as Williams had 28 to MSU’s 14. Hellman had two yellow cards in the game, while Kaela Smith ’25 had one in the fourth quarter. The Ephs were fortunate to have most of the calls go against them while they were in the offensive half of the field.

The Red Hawks allowed the fewest goals of any non-conference opponent the Ephs have faced thus far. A large part of their defensive strength was Red Hawk goalie Lauren Pickul, who saved 10 shots on goal.

The Ephs also played a strong defensive game. One specific save by Gates Tenerowicz ’23.5 came early in the second half, where the Red Hawks came out on the attack. The Red Hawks’ Carlee Thompson received a pass from midfield with only the goalie to beat, but Tenerowicz stepped far out from the net to deflect the shot away. The Ephs also relied on Batchelor, Welch, and McCarey, among others, to lock down the Red Hawks defensively and maintain possession.

In addition to the goal scorer Torres, van den Broek and Faith Stineman ’23 both had multiple shots on the day. For the Ephs, Batchelor was especially critical; she got five shots off, three of which required Pickul to make a play on the ball. She also stole the Red Hawks’ last opportunity, sprinting down the field to seal the Ephs’ 6th victory.

“I was really impressed with our composure, especially when we were in that really critical situation where normally, you could just fold,” Barrale said.

Williams will travel to battle the undefeated Amherst at 11 a.m. this Saturday, Oct. 2.