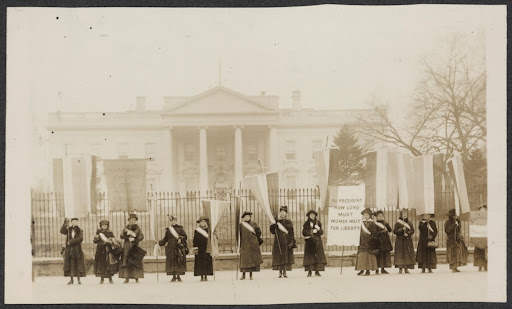 What started as a Williamstown resident’s suggestion that the Town community commemorate the centennial of the Nineteenth Amendment came to fruition over 18 months and a pandemic later, when The Long Road: Notable Women Remembered premiered at Images Cinema last Thursday.

The hour-long documentary — made locally by producers Bette Craig, Debby Dane, and Jack Criddle and presented by the Northern Berkshire Suffrage Centennial Coalition — honors the lives and legacies of women in the area who made significant contributions to the fight for gender equality. Made with a grant from the Fund for Williamstown of the Berkshire Taconic Community Association, the film “is a virtual tour of places in the Williamstown-Berkshire area where women fought for more power,” Craig said before the showing began.

The documentary features several historically significant women in the Northern Berkshires, beginning with arguably the most well-known: Susan B. Anthony. The Susan B. Anthony Birthplace Museum in Adams, Mass., commemorates Anthony’s life’s work in fighting for women’s suffrage alongside other notable suffragists, such as Elizabeth Cady Stanton. In the documentary, local historian Cassandra Peltier provides a comprehensive tour of the house in which Anthony spent much of her life. Anthony, Peltier tells us, received frequent visitors in Adams, including organizers from the abolitionist and temperance movements she also supported.

A decade and a half after Anthony’s death, Phoebe Jordan became the first woman in the country to have her vote counted in a national election, thus fulfilling Anthony’s lifelong goal of suffrage for women (although many Black women specifically still faced discriminatory voting policies). Jordan did so only miles away from Anthony’s home, in the nearby New Ashford, Mass. Cindy Grosso of the New Ashford Historical Commission gives viewers a look into the modest, well-preserved schoolhouse in which Jordan cast her ballot, which was a landmark moment in women’s voting rights. The continuing relevance of Jordan’s story was not lost on Grosso, who encouraged viewers to exercise the right Anthony and Jordan fought so hard for. “I’m sure that, if Phoebe were here today, she’d do everything in her power to get you all to get out and vote,” she said in the film.

The filmmakers draw a clear connection between the suffrage movement and the eventual rise of Swift, the first woman to hold the office of governor in Massachusetts. Swift, a North Adams native and longtime Williamstown resident, was elected the commonwealth’s 69th lieutenant governor in 1998, eventually stepping into the role of acting governor from 2001 to 2003. At the time, Swift was the youngest woman to serve as acting governor or governor in the country.

In The Long Road, Swift is interviewed by Anne Skinner, president of the Williamstown League of Women Voters. The two discuss Swift’s early experiences with political involvement, as the child of a father deeply involved in North Adams politics. They also discuss Swift’s gubernatorial tenure, namely the scandal prompted by her alleged misuse of the state’s resources to travel from Boston to her Berkshire home one Thanksgiving. Many of the accusations lodged against her, Swift said, seemed shrouded in misogyny, directed to her as a young mother and politician. “Every time I made a mistake — and news flash, everybody makes mistakes — and the press felt compelled to make it a mistake by an entire gender. That was a burden,” Swift  said.

The documentary also includes a look at the life and career of Helen Renzi, the first woman to be superintendent of the schools in Berkshire County. Renzi was also deeply involved with several non-profits and cultural organizations in the area, including the Williamstown Theatre Festival and Images. “Good citizenship is a fine Helen Renzi legacy,” her former colleague Sue Hyde reflected.

Several other prominent women in the Northern Berkshires are also featured, including Emma and Florence Bascom (the wife and daughter of John Bascom, Class of 1849 and a former professor at the College) and Jessie Woodrow Wilson Sayre, the daughter of U.S. President Woodrow Wilson and a Williamstown resident.

While all three women are recognized for their work in the suffrage movement, the filmmakers do not shy away from addressing the fervent white supremacy of Sayre’s father. “Woodrow Wilson was a Southern-born white supremacist whose legacy … raises important questions about that earlier Progressive era that are relevant to our own racial reckoning with white privilege,” historian Carrie Waara said in the documentary.

Waara also discusses Birth of a Nation (1915), referred to by one 21st-century critic as “the most racist movie ever made.” While Wilson screened the film in his White House, showings of the film in North Adams sparked protests by Black residents. The connections between the local Berkshire area and white supremacy do not end there, however, Waara notes. “Tragically, Birth of a Nation is widely recognized as contributing to the growth and spread of the [Ku Klux Klan],” she said. “And our local newspapers, into the 1920s, reported on KKK meetings right here in Williamstown.”

The documentary follows this history of anti-Black racism in the area with the story of Margaret Hart, a woman who fought against the racist and sexist status quo, becoming an activist for equality and one of the first Black graduates of the North Adams Normal School (now known as MCLA). Hart was a teacher in Pittsfield for over 25 years, accepting the position in 1949, a time at which she was the only Black teacher working in the city.

In speaking about Hart, MCLA Professor Emeritus  Frances Jones-Sneed highlighted Hart’s dedication to mentoring and supporting local BIPOC young people who have been underrepresented in higher education. Hart also played a significant role in the history of the College in the years after it began allowing Black students to enroll. According to Jones-Sneed, Hart and her family took it upon themselves to provide housing for Black students when they were denied it by the College, in addition to hosting weekly Sunday dinners for BIPOC students. To Jones-Sneed, who knew her personally, this was characteristic of Hart. “Maragret Alexander Hart was a change agent,” she said.

The locally focused, nationally meaningful activism of Hart and many of the other women included in the film sets them apart, but choosing which women to feature was a very difficult process, Craig told the audience. The women they did ultimately include offer not only a look into the Berkshires as they once were, but also potentially a way forward in solidarity with other social movements, Berkshire local Barbara Winslow said. Jones-Sneed echoed this sentiment, quoting a tribute written to Hart by a former student: “The sister stepped into the light. Now she passes the torch onto us.”

The Long Road is now available to stream online and will be broadcast on WilliNet (Channel 1303) through the end of October.