‘A sea of kettles’: What happens to items CSS confiscates for fire safety 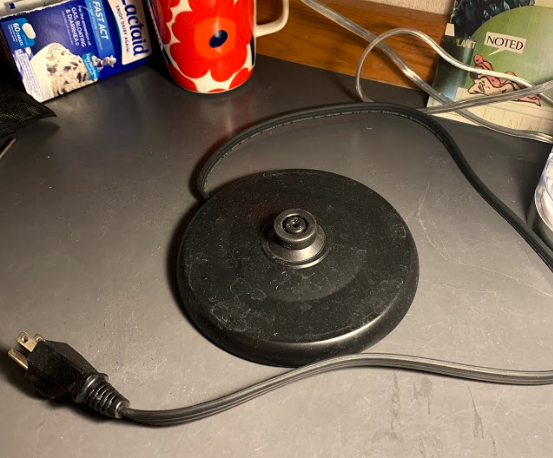 Fire alarms could be heard across campus on the evening of Sept. 22 as members of Campus Safety Services (CSS) entered dorms to perform routine room checks. Some students heard the nearby alarms and knew that meant their building was next. Other students were in class while the alarms went off and, upon returning to their dorm rooms, found that some of their belongings had been confiscated for fire safety reasons.

One such student was Angela Hsuan Chen ’23, who was biking back to her dorm to get a notebook when she saw a group of eight CSS officers standing outside Morgan with flashlights pointing to the ground. “It looked like something was wrong,” she said. “But as I looked closer, it was really just a sea of kettles that they were staring at. I should’ve seen that as a sign, but I didn’t give it a second thought because I didn’t realize that they were going to sweep the entire campus so quickly.”

When Chen returned to her room in Horn Hall, she quickly realized that her very own tea kettle was missing: The power base had been left in her room, but the actual kettle had been confiscated.

“It was so terrifying and quick and coordinated how they just swept across campus,” Chen said.

Manager of Safety and Environmental Compliance Frank Pekarski provided two main reasons for confiscating items such as tea kettles, rice cookers, electric hot plates, and heating lamps, which he said are threats to fire safety. “We want to minimize the number of false alarms, which can come from burning food (or similar) in the rooms,” Pekarski wrote in an email to the Record. “Even steam can sometimes trigger a false alarm.”

Two issues with false alarms, Pekarski explained, are that they disrupt students who might be sleeping and force everyone to evacuate, which can be challenging in cold weather, and frequent false alarms can lead to students taking an alarm for an actual fire less seriously.

Additionally, these items are confiscated to reduce the risk for actual fires in dorm buildings. “If too many appliances (or a particularly energy-intensive appliance) are used in the building, it is possible that the wiring of the building could become overloaded,” he told the Record. “Wiring with too much of an electrical load can result in a fire, all on its own (even if the appliances themselves are being used properly!).”

The two most common confiscated items are tea kettles and hot pots. Two of the strangest finds from years past, Pekarski said, were blow torches and live chickens living under a strong heating lamp — both of which were taken care of separately by CSS.

Pekarski said that confiscated items are placed in storage on campus, and students can get their items back either after they receive an emailed violation letter — as long as the items can be safely used and stored in a kitchen or common room on designated countertops — or at the end of the semester for items that are prohibited from all areas of the buildings, such as camp cook stoves or hot plates. Facilities declined the Record’s request to photograph the confiscated items, citing a wish to preserve the security of students’ belongings.

Students can reclaim their items by contacting Pekarski at the email address provided on the violation notice issued by Facilities prior to the end of the academic year.

But, as of Sunday, Curren Flaherty ’23 said he had received no communication from Facilities or CSS about his confiscated tea kettle. “I just want some form of communication,” he said. “I want to know if I’m going to be charged for the fine on my term bill or if I will have to pay it myself. I just don’t know anything — granted, they have to process a lot of fines right now.”

Chen, who also hadn’t been contacted, said she was stressed about not knowing what was going to happen to her kettle.

CSS did not do room checks last year due to COVID-19, so the recent room checks were the first to happen in over a year. Pekarski said that the number of items confiscated during room checks this semester was up from the norm by approximatey 50 percent.

This year, the Facilities office is busier than usual with other time-sensitive tasks on campus, including COVID testing, dealing with mold from the recent rain, and performing building inspections with the town.

“So [processing fees] is expected to take longer than normal,” he said. “We are going to process these as quickly as feasible, and we appreciate your patience in the interim.”

Pekarski emphasized that students, for the most part, have done a good job of complying with the fire safety rules. “We appreciate that most of you truly respect your fellow students, and abide by these policies that are really just there to help keep everyone safe and free from unnecessary disruption,” he said.