Bears spotted around campus throughout spring and summer 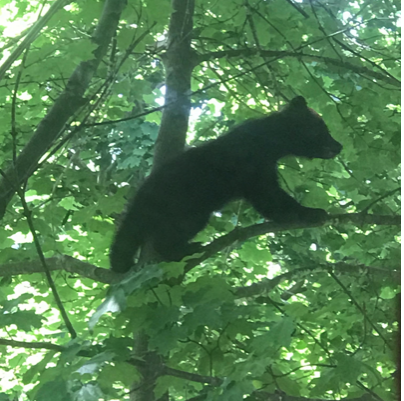 A bear cub got stuck in a tree in Scott Lewis’s Williamstown yard. (Photo courtesy of Scott Lewis.)

By the time an adult black bear, looking distinctly out of place, lumbered around Spring Street on the evening of July 2, one would have found it hard to be shocked. At this point, most students living on campus had seen on social media, or heard through word of mouth, that bears had been passing through every so often since late spring.

On May 15, someone took a picture of a cub walking past Greylock Hall. (At the time, I insisted to my friends that it must have been a weird-looking dog, and that bears simply would not go there. I was to be proven wrong over and over.) On May 27, an adult bear was spotted square in the middle of Greylock Quad.

June 3 brought two particularly large ones to a dumpster behind Susan Hopkins House, where Associate Professor of Economics Owen Ozier photographed them next to some bags of trash. On July 12, a bear was spotted walking near Stratton Road, less than a mile east of Currier Quad. Aug. 8 marked yet another cub sighting on campus.

“She was cute but looked scared,” Tula Schapiro ’22 said of the July 2 bear to the summer on-campus students’ group chat. It was like a fish out of water. (Or just a bear out of forest.) Known for being skittish and non-confrontational, black bears are a strange sort of animal to encroach on the College’s manicured campus: benign enough not to cause a full-on panic, but large and intimidating enough to cause quite a stir.

According to the state’s Division of Fisheries and Wildlife, Massachusetts boasts at least 4,500 black bears and counting. While the population is anchored in the western half of the state, there have been sightings in even the Boston suburbs as young males explore beyond their existing territory. In the spring, they wake from hibernation and venture out of their dens. Bird feeders and garbage cans draw them into yards. Loud noises and intimidating humans drive them away.

As their population grows, and their range extends east, their density in the Berkshires appears to have increased. Town residents with longer recollections than most students at the College agree that in the past several years, bears have been seen around town with greater frequency.

“Over my 25 years of living in Williamstown, I’d say there has been a noticeable increase in bears,” Williams Outing Club (WOC) Director Scott Lewis wrote in an email to the Record.

WOC Assistant Director Dave Ackerson, who lives in North Adams, said he has also observed an increase over the last several years. “I probably see four or five bears a year just around here in Berkshire County,” he said.

As the overwhelming majority of students left campus in March 2020, Williamstown native Noah Savage ’21.5 remained in town through the spring. Over the summer, he conducted research in Hopkins Memorial Forest that involved setting up a network of wildlife cameras to create a dataset of animal sightings that could foster future research. As it happened, the project coincided with an increase in bear sightings around town – which he speculated could have resulted from the decreased noise levels that accompanied the pandemic’s onset. Even as he visited the habitats and trails of animals in the forest, bears were visiting the streets, lawns, and yards of Williamstown.

“On a personal level, I was doing it to become better acquainted with where I was in the world,” he said of his research. “I was going to [the bears’] home the way they were going to ours, is kind of the way I see it. I got a chance to go wander on their turf and follow game trails through the forest.”

Savage is also in charge of a nature-centric student group called ‘The Cult’ — which he assured me is just a GroupMe chat of people who share a reverence for nature, not some insular group of devotees headed by a charismatic figure. Past cult activities have included literally hugging trees.

“The Cult is a chance to build a community around paying attention to the fact that we’re not alone in this space, and just paying respect to that in not an academic way, [but] a more spiritual way,” he said.

Although I haven’t attended any of the Cult’s outings myself, Savage’s description of nature as a source of spirituality hit home. There is something magical about encountering a wild animal, especially one that looks like it could beat you up but will generally decide not to. It offers plenty of opportunities to create meaning and reflect on one’s own place in the natural world — and we are only the latest humans to encounter them.

In both symbol and substance, bears figure prominently in the spirituality and culture of the Stockbridge-Munsee band of Mohicans — the tribe that originally inhabited much of the Berkshires. According to resources provided by the Stockbridge-Munsee Tribal Historic Preservation Office, bears (known in Mohican as “muxkw”) were traditionally considered immortal, and were “respected as having the spiritual power to communicate with heavens and earth.” The tribe’s story of the ‘Great Bear Chase’ illustrates the interconnectedness between bears, humanity, and the rest of the natural world:

“The stars in the Great Bear [Big Dipper] constellation are men in heaven who hunt the bear. The chase begins in the spring and lasts through the summer. In the fall the hunters wound the bear and his blood falls, turning the leaves red. By winter the sky the men kill the bear and his fat is the snow that falls to the earth. The approaching summer melts the fat and turns it into sap that rises in trees.”

The institutional response to a bear sighting at the College does not have room for much reverence or enthusiasm. Dave Boyer, the former director of Campus Safety Services (CSS), said his office had fielded a few calls regarding a bear on campus this past spring. It was the same bear, he said, and it had a predilection for roaming around the area near Susan Hopkins and Agard Houses.

“Our procedure is always to keep spectators away from the area and allow a bear to return to their natural habitat,” Boyer wrote in an email to the Record. “We will sometimes use sirens to speed up the process.”

More recently, CSS applied a similar procedure to a rarer visitor: a moose that was spotted at various points standing on Cole Field, running past the Cole Avenue liquor store, and — thanks to the sirens — walking away from humans and into the Hoosic River.

For those of us who don’t have sirens handy, the recommended protocol for dealing with ursine encounters is less fancy. Don’t run away, or you may be perceived as prey; instead, appear tall, make noise, and retreat slowly. Female bears with cubs are prone to be protective and more aggressive than they usually are.

Lewis summed up the guidelines for such situations in just a few words: “Don’t approach, but do appreciate.”

“On the off chance that a black bear actually happens to attack — which is very, very, very seldom — fighting back is the thing to do,” Ackerson said. A bear encounter of his over this past summer illustrated more typical behavior. “I was walking on the Appalachian Trail. I came around a corner — I was southbound and the bear was northbound on the trail … we were face to face about 20 feet away, both very surprised, and the bear just turned around and took off really fast.”

Lewis recently experienced an even closer encounter in a neighbor’s yard. “I heard something, looked up, and literally five feet in front of me was a very large black bear lumbering up the driveway,” he wrote in an email. “I was a bit startled and said, ‘Hello, mister bear.’ The bear looked up, stopped for a moment, then continued up the driveway to the back where the garden was. I followed, far behind and quietly, just to watch the bear continue to saunter off!”

Knowing how to manage the risk inherent to a bear encounter is a prerequisite for gaining anything else out of it. Savage offered me some recommendations for making the experience a meaningful one.

“Make sure to respect [the bear’s] distance and stuff like that,” he said. “But I would say, take a moment to think about what that animal’s perspective on the world is and what it’s experiencing right now. Where it might be going, where it might be coming from, what it might be feeling. Is it hungry? Is it looking for something to eat? Is it scared of you?

“I like to think seeing an animal is a gift. It’s not just luck that it showed up there…Take it as a chance to learn and a chance to look at where you are in the world from a different perspective. And it’s kind of a wonderful thing.”