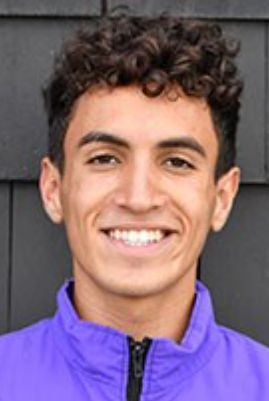 You had a meet today, right? How’d it go?

[The Little Three Championship] was excellent! It was the first big team meet we had. We had a really small one that a few guys ran at, but this is the first one where everyone on the roster who wasn’t injured ran. Our top seven took the first seven or eight spots. And the women’s team also won, actually. It was all-around really good — we defended the title, three years in the running.

Do you have any traditions or rituals before a meet?

Yeah, we have a bunch. It really depends on the meet. This was a Little Three’s meet, meaning it was just us, Wesleyan, and Amherst. The men’s team does a Little Three’s run the day before. We had a lot of traditions, but we canceled some of them … like, we used to run through the buildings and yell stuff. I didn’t want to do that this year; I wanted to go in a different direction. And also, [because of] COVID and masking, and all that. [Now], it’s just running around campus, showing [the team] a few spots, teaching them the team chant and the bear toss. We also have our little mascot, T-bear. Do you know what that is?

It must’ve been back in the ’70s, or ’80s, or something, but a long time ago, some guy in the Williams Cross Country team ran a road race at home. He won, and he had the choice [of a prize] between some $100 voucher or this giant teddy bear. So everyone was like, “Get the bear!” But then, we end up having an amazing season the season after he gets it, [when] he starts bringing it to races and practices as a joke. Everyone thought we were winning because of the bear. Then, all the other teams got cued in on that. It was like, “Oh shit, it’s the bear.” Ever since, all the teams in [the] NESCAC try to steal the bear. We defend it. People put their team logos [on the bear] and sew in other animals, so it’s a pretty crazy-looking contraption. It’s a very storied cross country tradition.

Have you been on the team since freshman year?

Yeah. I didn’t think I was going to run when I was in [high school]. I started later than a lot of my teammates because a lot of them did club [team]s. I started running seriously around sophomore year of high school — I was pretty good, and then [I got] injured for most of my career. My senior year, I ran decently well. I finally got healthy. I broke 10 minutes for the two-mile. After I got in [to Williams], I had incredible energy. I didn’t think I was going to end up at a place like this. I emailed the coach a month before and asked him what he thought. I thought Williams was too fast for me. I ended up walking on the team, and I’ve been doing it for all four years.

Do you like cross country more for the running or the competition?

I’m actually more of a track guy when it comes to competition because there’s just something about ripping it on the rubber that I really like. I’ve traditionally not been an amazing cross country runner. My freshman year I was last on the roster. Now, [at Little Threes], I came in 10th for the team.

What’s your favorite route to run on campus?

I’ll define campus loosely. If I’m doing a really short run, I go out of [Route] 43 [to] Cluett Meadow. It’s a really, really gorgeous meadow. It’s pretty close to campus. I like finishing the road loop over to the Clark, and then messing around there — Stone Hill, the reflecting pool. For actual runs, Vermont’s really nice. And Mount Hope, which is where the seniors go before graduation. There’s a really great connection of trails over there. And South Williamstown — that’s also nice.

Do you guys have any team bonding events?

We have something called Tuesday Tuesdays. Every Tuesday, people get together. It’s super random, but it’s [so] like you can get away from your homework for an hour. We’re pretty good at organizing social stuff. In the past, the night before a meet, we’ll do snacks — it’s what it sounds like. We’ve got storytimes. We modeled that after Williams Storytime.

What’s the biggest thing you’re going to miss when you graduate?

My parents immigrated from Morocco [in] the ’90s. I think that, for a really long time growing up, I internalized the migration route. My grandparents can’t read and were farmers; my granddad ended up working at a cigarette factory. My parents didn’t finish high school, my mom had tuberculosis, and my dad needed to feed a family of 16. He found work in Europe. They got married and moved to the States. So I think I’ve always been very focused on movement — moving forward from farmer to housekeeper to lawyer. I’m in a constant state of motion. The thing I’m going to miss most about Williams is [that] this is the first place where I actually feel like I have roots. I’m about to graduate and enter the real world, and everyone I love will also be in the real world. So it’s like, I’ll be leaving a place behind again, a place where I actually feel grounded.