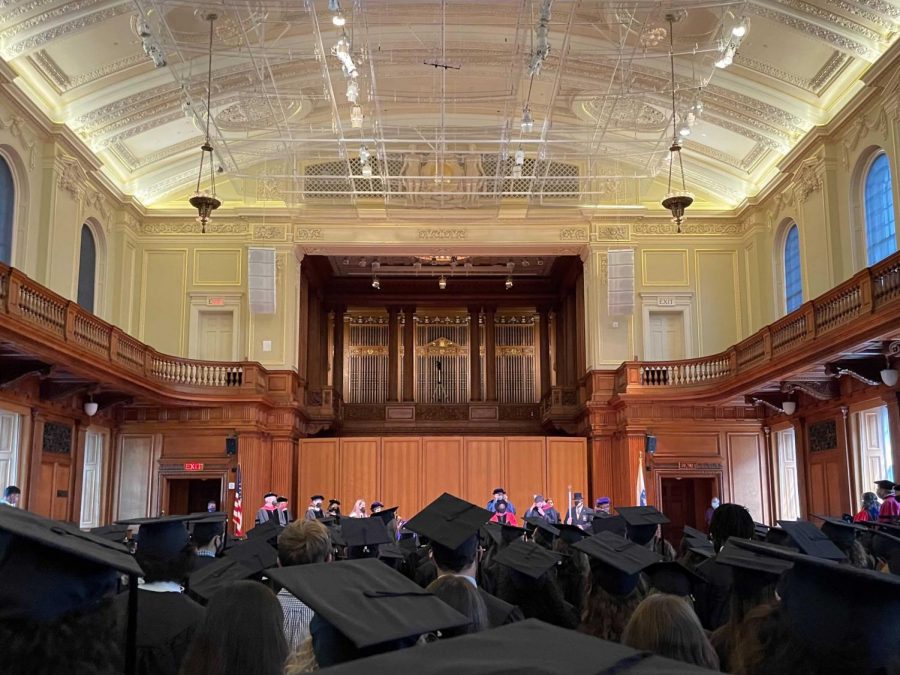 After a virtual Convocation in 2020, the ceremony made its in-person return for the Class of 2022. (Sofie Jones/The Williams Record)

The College marked the start of the 2021-2022 academic year on Saturday in the annual fall Convocation ceremony, which was held in Chapin Hall with over 400 members of the classes of 2022 and 2022.5 and final-year candidates in the College’s graduate programs in attendance.

While Convocation was held in person this year, unlike the virtual proceedings in 2020, the COVID-19 pandemic still loomed over the ceremony. All attendees were required to wear masks indoors and asked to abstain from singing along to renditions of “America” and “The Mountains.” The ceremony coincided with the 20th anniversary of the 9/11 terrorist attacks — a solemn occasion acknowledged by multiple Convocation speakers.

This year, the College implemented a new, more accessible processional route. Instead of going up the hill near the President’s House, the procession curved around Paresky Lawn before continuing down Chapin Hall Drive and into the venue through the wheelchair ramp.

This return to large-scale in-person events after a year of pandemic restrictions was not without some logistical challenges. Some students marched without caps and gowns after the Williams Bookstore ran out.

This year, DiFebo received the Bicentennial Medal, an award conferred to distinguished alums. The College will confer four other Bicentennial Medals to alums through virtual programs over the course of the 2021-2022 academic year.

A first-generation college student from the Bronx, DiFebo credited Williams with changing the trajectory of her life. She came to campus in the midst of efforts to increase the student body’s gender and socioeconomic diversity. At the College, DiFebo majored in Psychology and completed a concentration in Art History.

Today, she serves as CEO of Deutsch North America’s New York office and is known for “applying marketing insights to build support for nonprofit causes,” per the program handed out at Convocation. Mandel credited DiFebo with hosting over 150 students from the College for internships, Career Treks, and other career-exploration programs.

In her Convocation address, DiFebo emphasized the community at the College, with “an alumni society that thrives because people like you and people like me, and those we came before us, have experiences here and we have stories here. And we share values.”

“The experiences we all have are different and the memories will all be different, but the myriad of connections we’ve all formed during our time here bind us,” she continued.

In their speech, Herrera and Jones acknowledged the “unprecedented circumstances” that have marked the senior class’ time at the College: The Class of 2022 arrived at the same time as Mandel, the College’s first female president; they witnessed the abolition of College Council; and, of course, they saw their college years disrupted by the onset of a global pandemic. The class speakers called on the seniors to complete their last year as a community, especially after the pandemic has led them to realize “how hard it is to be a Williams student without the support of our classmates, our closest friends, our entrymates, our teammates, our professors, staff members, and administrators.”

Herrera and Jones also noted that the Class of 2022 is the only class currently at the College that has experienced a full school year without pandemic restrictions. They called on seniors to foster the traditions that have been meaningful during their time at the College while also assuming the responsibility to phase out traditions better left in the past.

During the ceremony, Jones, the recipient of this year’s Grosvenor Cup Award, was recognized, as were the 27 newest members elected to the national honor society Phi Beta Kappa.

The Grosvenor Memorial Cup, awarded in memory of Alan Livingston Grosvenor ’31, honors the graduating student who has “best demonstrated concern for the college community and beyond through extensive dedicated service, and who has served with the utmost integrity and reliability.” Class officers from the Class of 2021 gathered in the spring to nominate the recipient of the Grosvenor Cup, describing Jones as “an exceptional person, leader, and intentional community builder.” On campus, she has served as a Junior Advisor, WOOLF co-director, and Williams Outing Club board member.

The ceremony concluded with a Benediction by Rabbi Seth M. Wax, the College’s Jewish Chaplain, and was followed by an all-campus picnic on Chapin Lawn. The event was closed to the public but was recorded and posted on YouTube.