Seniors reflect on ending their time at the College 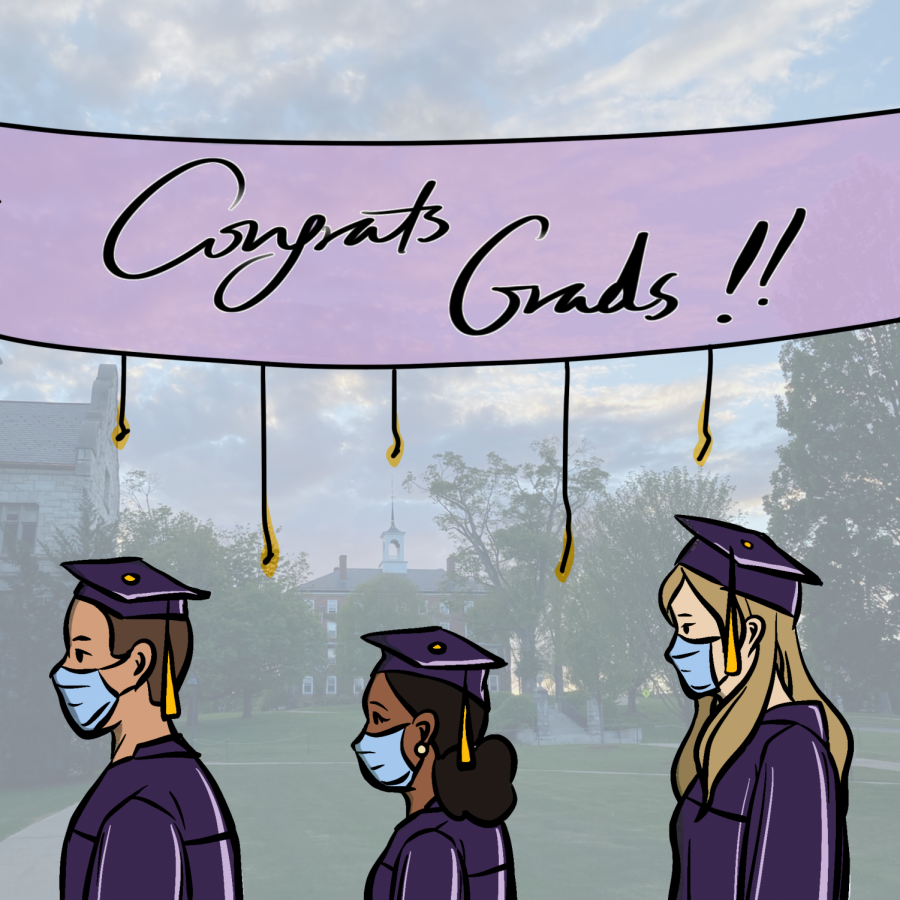 Graduating seniors will be allowed to bring six guests each to the senior celebration ceremony. (Angela Gui/The Williams Record)

The Senior Celebration for the Class of 2021 is less than two weeks away. The College announced in March that the event, scheduled for Monday, May 31, will be held in-person immediately following final exams. And it announced yesterday that seniors can bring up to six guests to the ceremony, where attendees won’t have to wear masks or socially distance if they are fully vaccinated.

“I’m so excited, and I feel like it came at the perfect time,” Haeon Yoon ’21 said of yesterday’s announcement.

Senior Weekend activities, however, will still take place over a day and a half, from the afternoon of Saturday, May 29, to Sunday, May 30, rather than the traditional weeklong period.

“It feels weird,” Angel Ibarra ’21 said of this year’s abbreviated graduation activities. “I’m thankful that we have some resemblance of it. But it doesn’t feel real.”

Zach Babat ’21 voiced a similar sentiment about Senior Weekend. “Obviously, it’s a huge bummer,” he said. “But also it’s very much in keeping with the theme of this year. A lot of sacrifices had to be made. I’m just sort of trying to take it in stride and not think too much about it… [and] try to enjoy myself within the parameters I’m allowed.”

For many seniors, one of the most difficult aspects of their graduation is the condensed timeline. “Mt. Hope will be definitely cool,” Babat said. “[But] what I’m really bemoaning is not the loss of specific organized activities. I just would love to have a week to hang out with friends. Just one more week, that’s what would have mattered. It’s the loss of that time that’s the biggest deal.”

This year, what would typically be Commencement is being referred to as Senior Celebration, as diplomas will not be mailed to graduates until after final grades are approved on June 13.

“Graduating feels fake, because everything is compressed,” Ibarra said. “It’s so rushed. You don’t have time to process things. Processing graduation hasn’t hit, and I don’t think it’s gonna hit until once we’re already gone.”

“College is a big deal,” Ibarra continued. “I’m always thinking of the seniors last year whose parents really were looking forward to [commencement], and they didn’t even get to see that… I feel really lucky, because [my parents] are able to come from Texas to come see me.”

With regards to the College’s most recent announcement increasing the allowed number of guests, Ibarra said, “The notice came so late it’s really difficult to make any adjustments that won’t take a toll on our financial situation. I think it’s great for those who can, though!… I’m just grateful that the most important people in my life get to see me graduate.”

Both of Babat’s parents, as well as one of his sisters and one of his grandparents, will also attend the ceremony on campus, but he brought up equity concerns for fellow classmates whose families cannot attend. “I want to note that I’m not particularly happy with the fact that they’re doing commencement on a Monday,” Babat said. “I have a good number of friends for whom it’s a real problem to try to get their guests… because people have to work.”

“I have first-gen friends who have a serious issue because graduation is a big deal for them and their families, and their families aren’t really going to be able to enjoy that because it falls in the middle of the workday on a Monday,” Babat continued. “Even though that Monday is [Memorial Day], some people are just not able to take time off work in the time that they would need to celebrate in the fullest possible capacity.”

Yoon’s family members live abroad and will not be attending the event in person. Because her parents are not fully vaccinated, having to include a quarantine period would interfere with their work schedules. However, she is still excited to spend the weekend with friends.

“I didn’t expect a lot from COVID progress in general, so even this is great,” Yoon said. “I feel very lucky to be able to at least celebrate with my friends, even if it’s [for] two days… I definitely am a little jealous of the classes prior, who have wonderful photos of hanging out at Mt. Hope and other celebrations that come with Senior Week, but I’m overall just feeling grateful. It’s a big relief on my end. It’s just a little bit of a shame, but we’re not complaining.”

“I luckily got my high school friends who are in the States to come, who are [fully] vaccinated,” she continued. “And when we got the email this morning, I invited a bunch of underclassmen friends, too.”

Julia Mariani ’21.5 has decided to participate in commencement celebrations with the Class of 2022. “The decision for me to walk with ’22 really [came] down to wanting to have a normal graduation,” she said.

Mariani also shared her thoughts on watching her classmates graduate. “These are the people that I’ve been with for the past four years, and to not be leaving with them — the only way I can describe it is strange,” she said. “But I’m so happy for them. I’m so happy that they’re going on to this next chapter in their life.”

After majoring in chemistry at the College, Ibarra plans to attend graduate school at the University of Wisconsin–Madison to earn a doctorate in chemistry.

“I feel secure and comfortable,” he said. “But I know everyone right now is very scared because the job market, at least from what I’ve heard with COVID, is just abysmal… A good amount of my friends have had breakdowns.”

Babat, an economics major at the College, will be starting a job as a predoctoral research assistant at the Zell/Lurie Center at the Wharton School of the University of Pennsylvania, where he will be doing research on housing and urban economics.

“I personally am feeling fine, but the prospect of a COVID-impacted labor market was really scary,” he said. “I’ve been able to… sympathize with my friends who are having difficulties and just try to be there for them and support them.”

Since parents are now permitted to assist with move-out, Yoon said, “Part of me wished that, not to put [the] burden on my parents, they would be able to come to graduation and help me…  I was like, ‘Dang, even if this is the case, my parents still can’t come.”

Only Yoon’s father has been to campus to help her move in as a first-year, but they did not explore the area together. She remembered making a list of things to do with her parents for when they are able to visit. “But that future seems a little too far right now,” she said. “I couldn’t even imagine being able to stand outside without a mask on [until today].”

Yoon, a history and economics major, said she will stay with friends who currently live off campus immediately after moving out. Then, she will start a job as a business analyst in New York.

Mariani said that, within her friend group, there is a mix of people continuing on to either graduate school or a job. She noted that she expects post-graduate opportunities may still be difficult to navigate for off-cycle students when they graduate.

“I’m so impressed with the Class of 2021, with how they’ve handled this incredibly difficult year,” Mariani said. “[It’s] certainly not how anyone imagined a senior year to be. I think our class year, and also the class year of 2020, has handled it so beautifully and so gracefully, and has really done a fantastic job of keeping themselves accountable during the pandemic.”

Ibarra expressed his desire to return to the College someday after graduating. “Probably for Homecoming,” he said. “One more Homecoming would be nice. It was a good run, these four years.”