The Williams Record • May 5, 2021 • https://williamsrecord.com/457186/sports/softball-sweeps-cardinals-to-extend-undefeated-regular-season/ 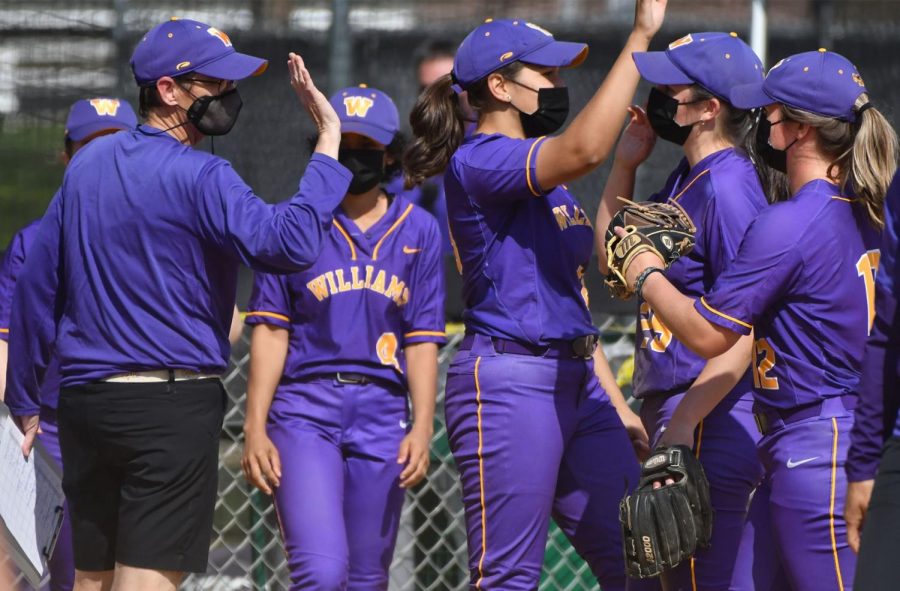 It was not a typical spring for softball — or any spring sports team for that matter — but the Ephs did not let that distract them from reaching perfection.

With three consecutive wins against Wesleyan last weekend, the Ephs finished the 2021 regular season with a tidy 12-0 overall, 12-0 in divisional play. Along the way, the team also won the NESCAC West Divisional title and Little 3 championship. They will host NESCAC East Division champion Tufts next weekend in a best-of-three series to determine the NESCAC champion.

On Saturday, the team traveled to Wesleyan for a double-header. The Ephs received strong pitching from Kirstin Mapes ʼ21 and Maya Hartman ʼ22 and a clutch two-run home run from Mara Kipnis ʼ22 to serve the Cardinals a double-dip.

The opener was a pitcher’s duel between Mapes and Cardinal hurler Revi Brown. Aly Granados ʼ23 led off with a single and stole second base in the following inning, but Brown escaped without allowing a run. Mapes gave up a two-out triple but struck out Alexis Campbell to leave the Cardinals similarly scoreless.

Both pitchers dominated the middle innings, with just one runner reaching scoring position up until the top of the sixth. There, the Ephs loaded the bases only for Brown to come through in the clutch once again, striking out the next batter and inducing a lineout to second to end the Ephs’ threat.

In the Ephs’ seventh, Adhya Tandon ʼ23 led off with a single and was sacrificed to second by Cris McElhinney ʼ21. Kipnis knocked out her first round-tripper of her junior year for a 2-0 lead. Brown scored a home run with one out in the Cardinals’ half of the inning, but Mapes retired the final two Cardinals to end the game at 2-1.

Mapes moved to 6-0 on the season for the College, going seven full innings for a complete game with one run allowed on four hits; she allowed one walk and threw six strikeouts. Kipnis, Tandon, and Dacia Green ʼ21 each tallied two hits for the Ephs.

In the second game, Hartman held Wesleyan off the scoreboard for the first three innings before allowing an RBI single to Brown in the fourth inning. The Ephs responded with a six-run top of the fifth to take a commanding lead. A Tandon RBI single tied the game, while a two-run single from Tayler Wise ʼ24 put the Ephs in the lead.. The game was put out of reach in the sixth when Kelly McGuigan ’24 hit two runs in with a single to right, and then scored herself thanks to a deep-left double from Mapes, making the game 10-1. The game ended after six innings due to the eight-run mercy rule.

After Wesleyan took a 1-0 lead at the top of the first, McGuigan grounded a single back up the middle and Mapes followed with a liner to center that chased McGuigan to third. Cirigliano then hit a chopper off the glove of Wesleyan’s pitcher and picked up an infield single that scored McGuigan, bringing the game to a tie. The Ephs took the lead in the bottom of the second inning when Granados drove the ball to deep right field. Racing to third with a triple, she scored when the Cardinals made an error in the relay throw.

It stayed 2-1 as Mapes and Wesleyan hurler Revi Brown repeated their duel from Saturday. The Ephs finally were able to tack on an insurance run in the fifth when Mapes made it to first after an error and Green got walked. With two outs, Hickey delivered a soft liner into center for an RBI single, giving the Ephs a 3-1 advantage. The team added another run in the sixth when McGuigan, Mapes, and Cirigliano came through with back-to-back-to-back singles with two outs, bringing the scoreline to 4-1.

Softball will seek to extend their winning streak next weekend on Cole Field, where they will host NESCAC East Division champion Tufts in the contest for the NESCAC title.