The Williams Record • May 5, 2021 • https://williamsrecord.com/457123/arts/reviewing-chloe-zhaos-nomadland-to-no-surprise-2021s-best-picture-winner-howls/ 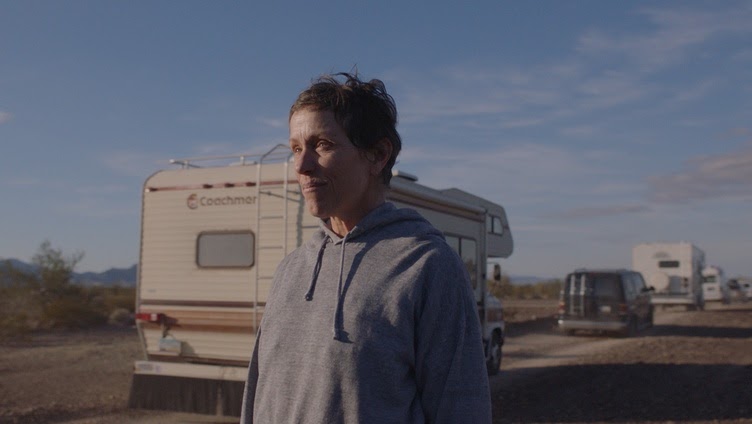 After over a year of foregoing theatrical releases for home viewing, I was not caught up on the movies nominated for this year’s Academy Award for Best Picture. But hearing the word “Nomadland” out of Laura Dern’s mouth on Oscars night and Frances McDormand’s howling as part of her acceptance speech made me excited to revisit the places in the American West (Wall Drug in South Dakota? Say no more.) that I had road tripped through when I was younger.

“Nomadland,” directed by Chloé Zhao, who was also the first woman of color to ever take home the Best Director Academy Award, is less about the journey of Fern (Frances McDormand), but rather the moments in between that make her lifestyle and travel worthwhile. Fern works a series of seasonal stints across the country — for Amazon during the holidays, at a sugar beet farm in North Dakota during harvest, and so on — following her husband’s passing and the post-recession disincorporation of the company town of Empire, Nev., where they both lived and worked. Exploring nature and loss against a backdrop of neoliberalism’s realities, the film did not disappoint.

The film begins with Fern in the middle of her journey; she has been living in the van for a few years. However, after her friend Linda (Linda May) invites her to a “desert rendezvous,” our adventure with Fern kicks off. We are introduced to a cast of nomads, including Bob Wells, a real-life YouTuber who helps prepare people like Fern for the nomadic lifestyle. We also meet Swankie (Charlene Swankie), another nomad with whom we spend one of the most poignant moments of the movie, and Dave (David Strathairn ’70), who rounds out the band of nomads and is introduced as a potential love interest for Fern. (Other than McDormand and Straithairn, all the movie’s actors are nomads playing loosely fictionalized versions of themselves.)

What I first noticed was the subtle nods toward a certain neoliberal decay throughout the film, acting as a genesis for Fern’s story. Moments like Fern refusing early retirement because she “can’t live off the benefits” allow Zhao to explore the relationship between the nomadic lifestyle and the conditions of American capitalism without proselytizing. When Dave and Fern take up another job at Wall Drug, we see how Fern’s economic hardship is depicted as very matter-of-fact.

As mentioned earlier, the depiction of Wall Drug brought back a road-stop attraction from my childhood road trips that, in retrospect, represents a sense of exploitation. Not only is this present in the narrative that Wall Drug presents — about the “Wild West” and the implications that this has for settler colonialism — but at the same time, we see Fern and Dave’s labor exploited in what seems like a somewhat thankless and exhausting job. Again, this is dealt with matter-of-factly, but the sense that something is wrong in having two seniors work in such a job never truly departs.

As I watched Fern travel throughout the American West, and especially across South Dakota, I was struck by the film’s lack of commentary about the indigenous experience. With the appearance of Badlands National Park, or as it is known in Lakota, Makȟóšiča, Fern traverses a space with a strong attachment to the Lakota’s historical memory. While I questioned why Zhao forwent the opportunity to explore the commonalities between Fern’s resistance to neoliberal ideals of productivity and the Lakota’s continued resistance to colonialism, equating those two modes of “resistance” would underplay the greater violence perpetrated against the Lakota under colonialism and how the Lakota’s forms of resistance directly challenge these intertwined systems of violence like environmental racism and capitalism.

Thus places like the Badlands lay a backdrop for Zhao to explore the characters’ emotions within nature. I was never particularly moved by the cinematography, perhaps because a Mission Park common room television doesn’t do it much justice. On the silver screen, the stunning, open expanses of Arizona, South Dakota, and the oft unnamed vistas would certainly better immerse the viewer in Fern’s emotional journey. However, the intersection of nature and the emotional journey of the characters is most obvious when Swankie, who we learn has terminal cancer, fulfills her kayaking fantasies. As my friends and I saw a character achieve their dreams of connecting with nature, we all let out an affectionate “aw.”

I remember my first-grade teacher explaining to us why a wedding ring is a circle: It has no beginning or end. One woman in “Nomadland” repeats that exact same remark to Fern about her husband’s ring. We are led to understand passing not as a loss, but more as a point of departure with an eventual return; towards the end, after learning of Swankie’s passing, we also see Bob Wells talk of his son’s passing. Wells says that he will see his son “down the road.”

In “Nomadland’s” final moments, Fern revisits Empire. The deterioration of Fern’s old town and home juxtaposed against the backdrop of the mountains that the camera so thoroughly emphasizes brings together the twin themes of decay and nature once and for all. As Fern departs, ostensibly to go out on the road again, the viewer has had only a glimpse into Fern’s great journey.

“Nomadland” is poignant and vociferous as it imparts commentary on neoliberalism’s realities through an emotionally reverberant character study that emphasizes the circularity of life, nature, and decay. For those who yearn to experience such a meander, it is a must-watch.