The Williams Record • May 5, 2021 • https://williamsrecord.com/457113/sports/womens-golf-wins-fifth-consecutive-nescac-title-advances-to-ncaa-championship/ 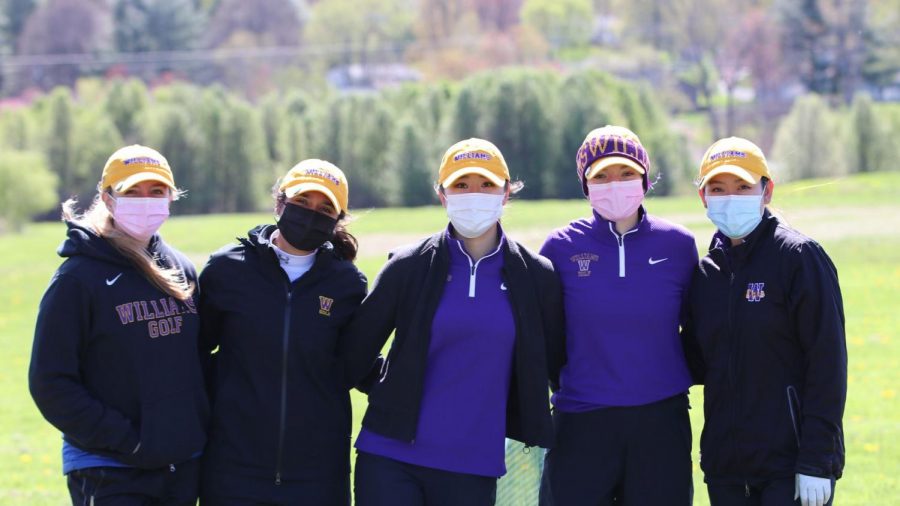 After winning the second and final match of the 2021 NESCAC women’s golf championship last weekend, the Ephs extended their winning streak and took home their fifth consecutive NESCAC title.

Due to the pandemic, the championship saw adjustments to accommodate the truncated season. Teams competed in two different 18-hole events at The Ledges Golf Club of Amherst over consecutive weekends, and the team with the lowest 36-hole cumulative score from the two events would be crowned the NESCAC Champion.

The first match took place on Saturday, April 24. With a team score of 319, the College held a small lead over Hamilton, who finished the day with 322. The match was not easy for the Ephs. Both the weather and the course presented challenges, as three out of five players on the team were new to the course.

With a score of 78, Malini Rudra ’23 was the lowest-scoring player for the Ephs in the first match. “I’m happy to see our team in the lead despite us not having our best first rounds,” Rudra said after the match. “I was hitting the ball well through the round, but mainly the struggle came from making putts.”

“Now that we know this course requires target golf, where we need to place tee shots strategically, we will better prepare for next weekend with that purpose and aim to clinch the title,” Rudra continued. “I expect much lower scores with better damage control next Saturday from all of us.”

Rudra’s expectations proved to be correct, as the Ephs scored a 309 the following weekend at the second round of NESCAC championships. With a combined score of 628, the Ephs secured their 5th NESCAC title 21 shots ahead of second-place Amherst, who finished with a total of 649.

Having secured the NESCAC title, the Ephs have earned an automatic berth in the NCAA Div. III Championship, which will take place from May 11 to 14 in East Lansing, Mich.

Rudra and Olivia White ’22 shared medalist honors, as both carded a 76 during the second round. “I had a really steady round today,” Rudra said. “Only made 4 bogeys and 14 pars. My iron game was a bit off but I was able to make some clutch up-and-downs. The conditions were a bit tough with the recent rain and a windy day, but the team was really determined to perform better this time around, and I’m so happy we executed.”

Other members of the team also excelled, renewing their personal records from last round. Tianyi Zhuang ’24 shot a 77 to follow her 81 from the first match, and Melinda Yuan ’24 posted an 80 to fire a 160 in total. Holly Davenport ’21 followed up her 90 from the first match with an 82.

“The team did a great job sticking to the game plan today, keeping the ball in play, and hitting some great shots when it really mattered,” Eph head coach Tomas Adalsteinsson said. “I was so impressed with how determined they were, and our whole team set the tone at practices during the week. This NESCAC Championship title was a true team effort! These ladies have done so well to keep improving their golf game while performing with excellence in their classes as well. As a coach, I couldn’t ask for more.”

The Ephs will look forward to the NCAA Div. III Championship after finishing the weekend by hosting Amherst and Wesleyan at the Northeast Tri-match.

“It has been a goal of mine to compete at nationals, and I’m so grateful and excited we have the opportunity to compete in Michigan,” Rudra said. “The team has worked hard up until this point, and it feels rewarding that we got this win. Knowing the team has come so close to [clinching] the national title in previous years makes me even more determined and excited to compete.”

The author is a member of the women’s golf team.