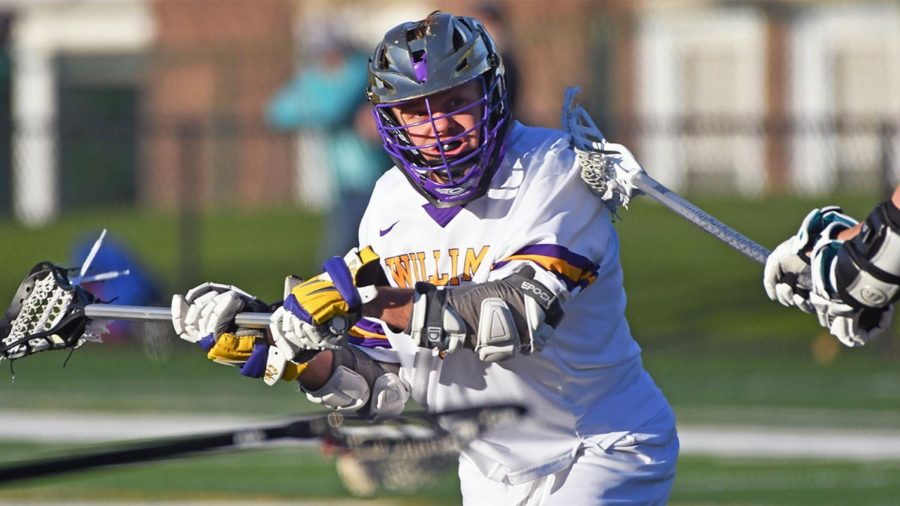 ter resulted in a seven-goal run that made the College’s lead insurmountable. The Ephs grabbed their second NESCAC win of the year on the road behind a career-high eight goals from Lund and an unbreakable defense anchored by Harry Gahagan ’21.

With 11:36 remaining in the first quarter, Tim Saffold ’22 opened up the Eph scoring to put the team in the lead. However, the advantage was short-lived, as the Continentals fired back a mere seven seconds later to tie the score at 1-1.

Sixteen seconds after Hamilton’s goal, Lund fed Alex Park ’23 to give the Ephs the lead once more. A lull in the offense was then broken by Gahagan, who connected with Lund for the Ephs’ third goal of the quarter. As the men in purple started to take control of the game, Saffold and Lund both grabbed their second goals of the game, bringing the scoreline to 5-1, but Hamilton’s pulled one back soon after to end the quarter at 5-2.

Both teams shifted to a more defensive approach in the second quarter. The deadlock was broken at 12:07 by Lund­, who completed his hat trick, giving the Ephs a four-goal lead. Zach Romrell ’23 added one more  three minutes later, and the College led 7-2. Hamilton responded quickly, scoring with 8:25 left in the quarter. The last eight minutes of the half were scoreless thanks to an impressive showing from Gahagan, who held down the Ephs’ defensive structure, giving the College a 7-3 lead going into halftime.

It took Cal Ewanich ’24 16 seconds to start the scoring in the second half. Driven forward by Ewanich and Lund, the Eph attack picked up where it left off, with the two focal points of the team’s offense connecting twice over the next five minutes to put the College up by seven goals with 9:19 remaining in the quarter. Pearse Glavin ’24 continued the momentum with another goal, extending the lead to 11-3. After Lund scored a man-up goal to widen the lead to 12-3 and complete his hat trick for the quarter, Romwell added another goal before the break, ending a dominant quarter with the score Williams 14-Hamilton 3.

The Williams offense stayed strong in the final quarter with two early goals from Jared Strauss ’21 and yet another from Lund. Following two successive goals from Hamilton to tighten the deficit,  Glavin connected with Lund for the 18th goal of the game, tying Lund’s career-high goal total of eight.

The two  Eph goalkeepers both showed excellent defense: Gahagan, who made nine saves for a .643 save percentage on the day, and Matt Freitas ’23, who kept a perfect 1.000 save percentage.

Speaking to the impressive third-quarter displayed by the Ephs, head coach George McCormack said he and the coaching staff “reminded the guys to trust their training and to continue to work together on both the defensive and offensive ends of the field.”

“Offensively, I feel that Cal [Caputo ’24] and Pearse [Glavin] have really stepped up as freshmen, and Zach [Romrell] and Alex [Park] have done the same as sophomores,” he added. “Defensively, Sam Cragin [’24] and James Hemmer [’24] are really stepping it up as freshmen. I was also really impressed by the play of our senior, Michael Armstrong ’21, who stepped in as our face-off guy today.”

The team will play next Saturday, April 24, at Wesleyan as it tries to build on its undefeated start to the season.