Contested races on the ballot for Town elections in May 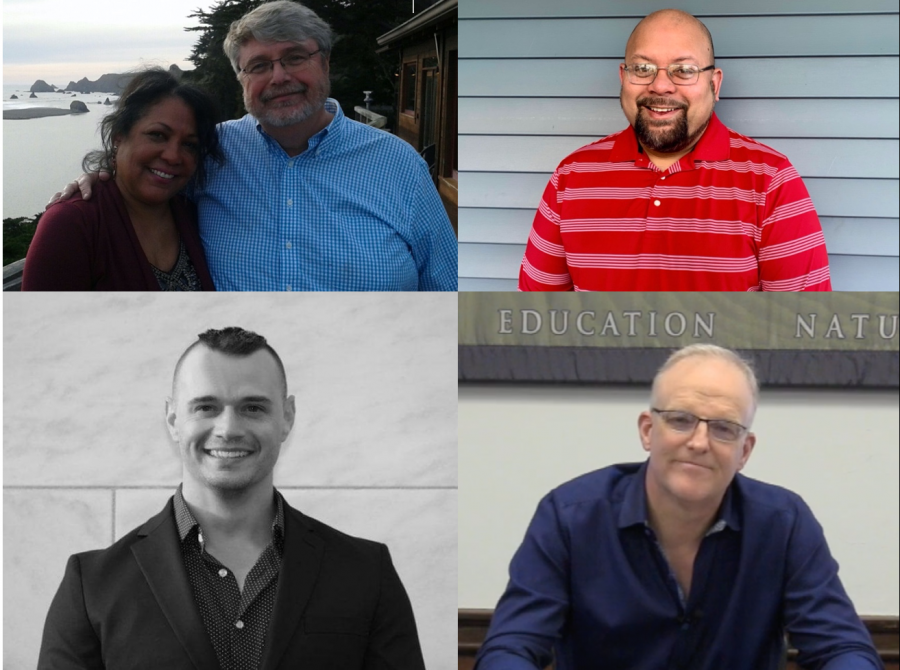 After a turbulent year for Williamstown marked by reports of police misconduct, the continued hardships of the COVID-19 pandemic, and the resignation of several Town officials, Williamstown voters will go to the polls on May 11 to vote for two new members of the Williamstown Select Board alongside several other local races.

One of the two Select Board seats up for election is currently held by Anne O’Connor ’86, who is not seeking re-election. Jeff Johnson and Tony Boskovich ’74 are running for a three-year term on the board to replace O’Connor.

The other seat, currently held by Jeffrey Thomas, would normally not be up until next year, but Thomas chose to step down a year early. The two candidates for the remaining year of his term are Albert Cummings IV and Wade Hasty. Two other candidates, Barbara Rosenthal and Niko White ’04, have withdrawn from the race.

The election marks the first time since 2016 —  when three candidates ran for two seats on the board —  that a Select Board race has been contested by multiple candidates, according to Town Clerk Nicole Pedercini. The five-member Select Board is the Town’s primary elected body and oversees the executive functions of the Town’s government. All Select Board members are officially nonpartisan.

The Town Planning Board, which focuses on land use issues in Williamstown, is also hosting a competitive race. Incumbent Susan Puddester, who has served on the Planning Board since 2016, is being challenged for a second five-year term by Ken Kuttner, who is a professor of economics at the College, and Roger Lawrence.

Anthony “Tony” Boskovich ’74, a former civil rights trial lawyer who says he focused on “hold[ing] law enforcement accountable” during his career, is one of two candidates running for the three-year seat on the Select Board. Boskovich told iBerkshires that he is running in part to represent those worried about expressing dissenting opinions amid uproar over Williamstown Police Department (WPD) misconduct.

“Williamstown is facing serious issues with respect to policing, residents who feel intimidated and shouted down in the name of the town, a town government that has had its senior staff run out of town, and a pervasive atmosphere of classism and condescension that is compelling residents to leave,” Boskovich said. “When I recognized the growing division and stratification within this town, I knew I had to step up and run for Select Board.”

Boskovich promised that, if elected, he would work to “restore the town to efficient operation while encouraging orderly participation in public meetings and engagement of all of its residents.”

Boskovich’s candidate statement, which was sent to the Record, can be found here.

Jeffrey “Jeff” Johnson, a service coordinator supervisor in the Pittsfield/North Adams office of the Commonwealth of Massachusetts’ Department of Developmental Services and a member of the Town’s Diversity, Inclusion, and Racial Equity (DIRE) committee, is the other candidate running for a three-year term on the Select Board. If elected, Johnson, who identifies as multiracial, would be the board’s only BIPOC member. He told iBerkshires that his background would help him to “bring people together”on issues ranging from affordable housing to police reform.

Johnson’s platform prioritizes “listening to all voices in town to identify common ground and to encourage participation when it comes to the operation of town government,” “establishing forums for safe, respectful, public dialogue to generate productive ideas” from citizens, and expanding affordable housing in Williamstown.

Some of Johnson’s specific priorities include working to “integrate Articles 36 and 37… [“two warrant articles designed to address issues of racial equity and diversity,” according to iBerkshires] into the policies and fabric of our town government,” assisting the WPD “with establishing stronger community connections via public forums,” and strengthening local environmental policies.

“I love and appreciate this town, and to me, that means I have an obligation to serve to the best  of my abilities,” Johnson said.

Johnson’s candidate statement, which was sent to the Record, can be found here.
Select Board – 3-year term with 1 year remaining
Albert Cummings IV

Albert Cummings IV, who has found fame nationwide as a blues musician and owns a construction firm in Williamstown, is one of two candidates running for the Select Board’s open one-year seat.

Cummings argued that he is the candidate who will work towards finding solutions to many of the Town’s issues. “I want to continue to provide an exceptional education to our youth,” he said. “I want our streets to be safe. I want to make absolutely sure that our elderly are taken care of. I also want to work together to find creative ways to make opportunities for all. I can’t guarantee that I can fix all the problems in town, but I can guarantee that no one will work harder than me to fix these problems.”

Cummings’ candidate statement, which was delivered on WilliNet, can be found here.

Wade Hasty, a current Massachusetts College of Liberal Arts graduate student and 11-year veteran of the U.S. Army, is also running for the Select Board’s one-year seat. “I have a personal vested interest in the lives that have been interwoven with my own [because of my military service],” Hasty said.

Hasty highlighted the unequal ways that policing impacts Black people across the nation, writing that his friend Traywick, who is Black, has been disproportionately targeted by law enforcement. “I was the driver of Traywick’s car when he was pulled over, on Post St., predicated by ‘driving while Black,’” Hasty said. “I am clearly not Black, yet Traywick is, and his vehicle had been routinely stopped on several occasions prior and knew firsthand what would happen.”

“Many think the typical patriot serving abroad is a fair-skinned, blue-eyed, country male, and they don’t think about others,” he added. “So I take very seriously the notion that everyone is deserving of life, liberty, and the pursuit of happiness.”

Hasty’s candidate statement, which was sent to the Record, can be found here.
Planning Board
Susan Puddester (incumbent)

Susan Puddester has held one of the Planning Board’s five seats since her first election in 2016 and also serves as the president of the Williamstown Community Chest, a local community aid organization.

A social worker by occupation, Puddester has spent her 10 years in Williamstown  involved in local housing-related issues. “After the destruction that occurred locally [due to Hurricane Irene in 2011], I became involved in helping the residents of the town, specifically The Spruces Mobile Home Park, find alternative housing arrangements,” she said. “It was due to this experience … that I became aware of the housing issues here.”

“The Planning Board has tackled several complex issues over the past five years,” Puddester said of her time on the board. “Finding ways to add a variety of housing options has been one of our goals. It’s not easy. There are many voices to be heard. I am feeling optimistic about the community’s ability to come together in a welcoming way to include any and all people who would like to call Williamstown home.”

Puddester’s candidate statement, which was sent to the Record, can be found here.

Kenneth “Ken” Kuttner, a professor of economics at the College since 2008, is one of Puddester’s two challengers for a seat on the Planning Board. He said that his priorities on the board would be “to promote opportunity and inclusive growth and at the same time preserve the town’s rustic character and natural beauty.”

“The Board should seek opportunities to further both objectives: looking for underutilized land near the town center that could be developed, for example; and identifying low-cost opportunities for conserving woodlands and farms,” he said.

In addition to emphasizing that he would act as an environmental advocate on the board, Kuttner said he “believe[s] we as a community should be doing everything we can to promote racial, ethnic and socioeconomic diversity.”

“There’s no magic bullet for this, of course —- it’s not easy to overcome centuries of history and the inherent inertia in location decisions,” he said.“But affordable housing, economic opportunity, and revitalization of the town center can only help.”

Kuttner’s candidate statement, which was sent to the Record, can be found here.

Roger Lawrence, who “grew up in a Williams faculty family” and currently “work[s] with those who labor with tools in their hands,” is Puddester’s other challenger. Lawrence said that he hopes to repair the relationship between the Town and the College as a member of the Planning Board.

“There is a groundswell of concern in our community that the College’s development agenda is damaging the town and eroding conditions for workers and their families in the community,” Lawrence said. “Underlying that is an ill-defined fear that powerful decision makers don’t care.”

“My message to the College is: Please be transparent and direct with the wider Williamstown community,” Lawrence said. “If we can all communicate openly, we will work with you to fulfill your plans.”

Lawrence’s candidate statement, which was sent to the Record, can be found here.
Housing Authority
Steve Dew

Charles Stephen “Steve” Dew, an attorney based in Williamstown, is running for an open seat on the Housing Authority, which owns three properties in the Town and manages two housing voucher programs for low-income residents.

“I want to help address the obvious and growing gap between what people have to do to earn a living wage on the one hand, and find affordable housing options in Town on the other,” Dew said.

Dew added that, if elected, he would focus on creating an affordable housing working group and increasing coordination between the Housing Authority and the Williamstown government. “There is no statutory requirement that compels the Housing Authority to work with or to collaborate with our Town government, although it has made some efforts to do so,” he said. “I would use my office to expand on those collaborative efforts.”

Dew’s candidate statement, which was delivered on WilliNet, can be found here.

Joan F. Diver, a resident in a subsidized federal program of the Department of Housing and Urban Development (HUD) is also running for the Housing Authority .“I’m running because affordable, safe housing is a broadly shared concern in our town, my town. As a subsidized tenant of a federal HUD program, it is certainly my concern,” she said.

“My background is based in law, public and community service, agency advocacy, indigency representation,” Diver said. She serves as the director of her community’s tenants organization, a group that “acts as advocates for seniors who cannot or will not speak for themselves,” she said.

Diver also noted that the COVID-19 pandemic has caused unemployment and stagnant wages, two concerns that lead to “working families … getting squeezed right out of decent, safe communities.”

Diver’s candidate statement, which was delivered on WilliNet, can be found here.

Voting will take place on May 11 from 7 a.m. to 8 p.m. in the gymnasium of the Williamstown Elementary School. Parking is available in the School St. lot in the rear of the school; disability parking is also available in the lot.